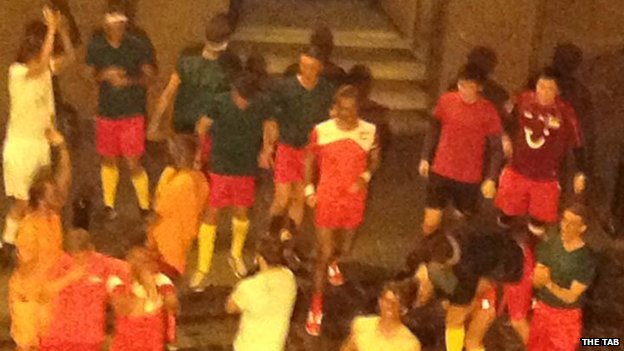 Thursday night, in the midst of election season, members of the Football Club fell under a lot of scrutiny after dressing up in “blackface” for a social themed on the African Cup of Nations.

Since then, the University have issued a full investigation as per their announcement yesterday morning, “The University and the Students’ Union have a zero-tolerance approach to racism and will respond robustly to any behaviour that does not meet with our values and expectations.

“We are disappointed that the actions of a few are tarnishing the reputation of the University of Stirling, and we wish to reassure students that a full investigation is underway and disciplinary action will be taken against any student found to have engaged in racist behaviour.”

As of last night, four of the Football Teams have been suspended from all football activities until the investigation is complete. Students have taken to social media, debating whether or not it was offensive for the members in question to have “blacked up”, or whether it was a respectful imitation of individual football players in celebration of the teams. There are also rumours that the members demonstrated aggressive behaviour towards the public, who were criticising their controversial costumes.

Brig can report everything that has happened so far.

The members of the Football Club attending the night-out occupied most of a nightclub, being very loud and boisterous in their chants of, “F**K THE TAB!”, and various drinking games. Students out on a different social soon left the establishment; noticing the team was out in “blackface”, and felt uncomfortable.

One of these students had stormed away from the establishment in disgust and said: “there was a group of about three of them that were loudly talking about how the stunt was ‘not racist’, to which I loudly replied that yes it is really racist, and disgusting. They were then kind enough to call me and my girlfriend faggots.”

In the streets, members of the public were confronting the players and pointing out that “what they were doing was unbelievably stupid and offensive”, to which one of them replied that they had been told to dress like that. Students, visibly outraged, were shouting at the members and calling them racist, yet the Club remained defensive, demanding to know how they were being racist.

During one of these arguments, an AirTV member attempted to record the events on his phone when he was spotted by a football player who approached him and smacked the phone out of his hand. He said: “I spotted three guys being antagonised by the football club. I thought getting it on camera was the best thing to do, and try to support those guys.

“One of the members spotted me, asked if I was filming, then walked right up to me and smacked my phone out my hand. He then lunged for me, so I defended myself and pushed him away.”

Straight after, a further fight broke out involving three other students with the football club, where another AirTV member, alongside students promoting local nightclubs, stepped in, resulting in the AirTV member getting punched in the face. The student who was assaulted told Brig: “It was a pretty quick scuffle, all I remember was that I pushed the footballer who was on my mate. He came at me flailing his arms and yeah I got a nice shiner in my left eye as a result.

“They were totally oblivious to how they might have been offending people. I find it absurdly hilarious that the team collectively thought: ‘Nope. This is fine. Totally not racist’”

A bouncer of a local pub witnessed the incident and can confirm that it was “blatant assault.” After the events finished, and came to public knowledge, many have been voicing their opinions loud and clear through social media. Many— not afraid to be strongly vocal— believing their actions cannot be excused and was blatant racist behaviour.

Others argue that it was not racist to dress up as an individual and that the Football Club is one of the most diverse in the University. Brig were approached by an enraged student who said, “I am writing to you today because blackface is incredibly offensive, and acts of racism should be brought into light.

“The African Cup of Nations is a time where football fans all over the world celebrate African Nations as they display excellence in this beloved sport. These young men have turned a day of celebration and pride into a mockery.”

Apart from unofficial comments via social media, Brig has not yet heard from the people involved in this incident, or members of the Sports Zone.

Brig will be providing full coverage and information in its next issue to be released on Thursday 12th February, as Brig is determined in having a fair representation of the story and all involved.

The beginning of the Big Brother state?