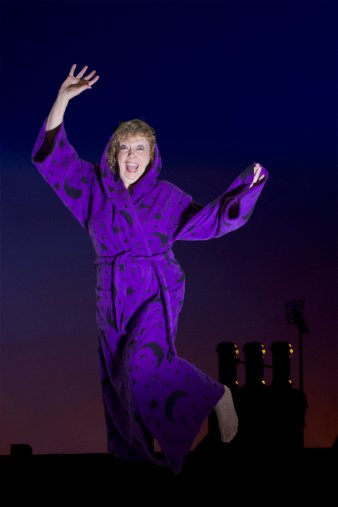 Arts Editor and Film & TV Editor Caroline Malcolm gives you a rundown on what’s been and what to look forward to at the Macrobert!

Butterfly was a well-balanced show where stunning visual drama met composed emotion. The story was inviting and invigorating and the acting was absorbing and hauntingly touching. The dark content of the narrative was superbly managed by the use of staging, lighting, costumes, music and direction. At the same time, the tragic essence of the whole piece was delivered with sensitivity and control. In all, this was a fabulously turbulent show and one which could enthral a diverse audience time and time again.

Romeo and Juliette was sensational. The infamous tragedy was delivered to perfection by the talented cast who embodied the heart of Shakespearian theatre. The ballet aspect was creative as it allowed the emotions of the narrative and its characters to come to life through music and movement. In general, the ethereal, almost gothic approach was exciting and gave Romeo and Juliette a modern, changeable attraction as a play and a performance that transcends time and the development of art.

Once again Macrobert is hosting a selection of high quality live shows this February and Brig is here to tell you about them through the words of Macrobert themselves.

You can enquire about events and book tickets by phoning Macrobert, visiting them or going online.

I Will Survive-14th of February

“Last year’s sell-out hit musical I Will Survive returns to Macrobert…This is all singing, all dancing proof that great friends and a good night out can be powerful in mending a broken heart – think of your favourite chick flick, but with extra drama and an amazing retro soundtrack!”

Walking on the Roof-19th of February

“Yvonne has a guilty secret, and she’s not the only one. How long before she is found out? Wild and wicked women, fugitives and fraud, gangs and guilt, mothers and sons, they’re all here and more! Walking on the Roof’ is a hilarious, poignant and nail biting drama from MsFits… Walking on the Roof is written by BAFTA nominated multi-award winning playwright Rona Munro, and was one of only 8 shows short listed by a panel of judges for the London Weekend Comedy Awards at the Edinburgh Festival Fringe. This is its first revival.”

“Destinations returns for the third year to wow audiences with a showcase of performances by some of the best youth dance groups from across Scotland. Audiences can look forward to a display of talent across a variety of dance styles including Street, Breakin/Hip-hop, Ballet, Contemporary and Bharatanatyam. Including a very special performance by the National Youth Dance Company of Scotland, premiering their new piece choreographed by Anna Kenrick.”

“No stranger to yap Alan Carr will be yapping his way around the UK & Ireland with his brand new stand up show ‘Yap, Yap, Yap!’  The BAFTA and British Comedy Award winning comedian, author and chat show supremo returns to his stand up roots with his hilarious take on life.”

Three’s A Crowd-26th of February

“Three’s A Crowd brings together six superb performing artists in this breath-taking and touching look at human relationships, emotions and how we all affect each other…Set around a reunion of friends, what really lies beneath the surface of this get together? How are they connected? What happens to the dynamic, to each other, when a third element becomes involved? Told with stunning imagery, thrills, spills, heartbreak, happiness and the odd bit of humour. Three’s A Crowd is an aerial dance theatre show involving harness flying, aerial acrobatics, circus, dance and theatre.”

What’s weird about being weird

Ariana Grande: Excuse me, I love you

Review: Amazon’s The Wilds throws us in at the deep end ★★★☆☆

National Hugging Day and the importance of being together

A look at the origins and the importance of national hugging day, and why sticking together…

Eating Disorders and Veganism: A recipe for Disaster

What happens when Veganism and Eating Disorders mix? Spoiler: it's not a good outcome for the…

Mr Joe Biden has officially taken office after his inaugural address and swearing in ceremony.…