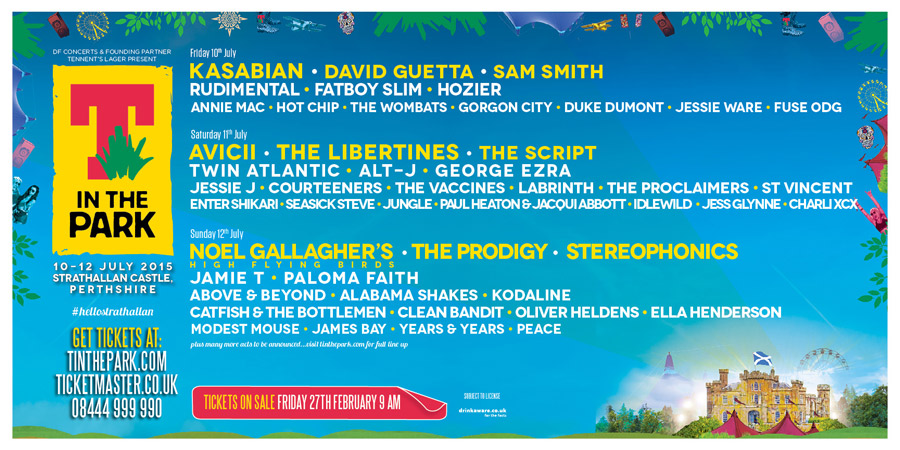 T in the Park have finally announced a lot of the big names that will be playing at Strathallan Castle this year, and I have to say, the line-up looks extremely underwhelming.

It’s not even that the line-up is horrendously bad, it’s just a whole lot of nothing new. Take Friday’s main attraction Kasabian for example. I’m sure they will be excellent, and they absolutely warrant a headliner position. So much so in fact, that they headlined in both 2010 and 2012. The other big names for the opening day are Rudimental and Sam Smith, who both played last year, as well as David Guetta – who headlined the Radio 1 stage in 2013.

The Saturday at least gives us new names in the slot in the form of The Libertines and Avicii. However, they are followed up by more people we have seen recently, in the form of The Script, Alt-J, George Ezra and Jessie J among others.

Sunday is far and away the most questionable day as yet, with headliners Noel Gallacher’s High Flying Birds having only released their second album a couple of months before the festival. I don’t question Gallacher’s position, but he is only this big of a name because of Oasis, and somehow I can’t imagine set being loaded with Oasis songs.

The Prodigy return to the festival too on Sunday, alongside Stereophonics. Again, I don’t question the quality we will see from the Phonics, but they haven’t released anything since they were last at the festival in the same spot in 2013, and there’s no date for any release so far this year.

While I’m not saying it will be a bad festival, it really isn’t all that exciting. Speaking as someone who needed to be convinced to go this year, if anything the announcements have put me off instead of tempting me to go.

There are a few acts I find exciting, but I am generally looking to the smaller text in the poster. I am looking at people like James Bay, Saint Raymond (both of whom actually played smaller stages last year), Catfish & The Bottlemen, Idlewild, Rae Morris and St Vincent. Even someone like Ella Henderson is a cool “get” for them, as she is someone I wouldn’t have been expecting to see, but when her name is there it makes total sense.

There is always a great depth of up and coming talent at T, and this year looks to be no different. But the headliners are definitely a collective step down from recent years. Comparing them to Biffy Clyro, Calvin Harris and Arctic Monkeys from last year; Mumford & Sons, Rihanna and The Killers from 2013; and The Stone Roses and Snow Patrol from 2012 alongside the returning Kasabian. It’s really not fair to compare any crop to the outrageously good 2011 headliners (Arctic Monkeys, Coldplay, Foo Fighters and Beyonce).

But there is an obvious step down for me. 2015 may be an exciting year for T in the Park, but it won’t be down to the three main attractions this time.