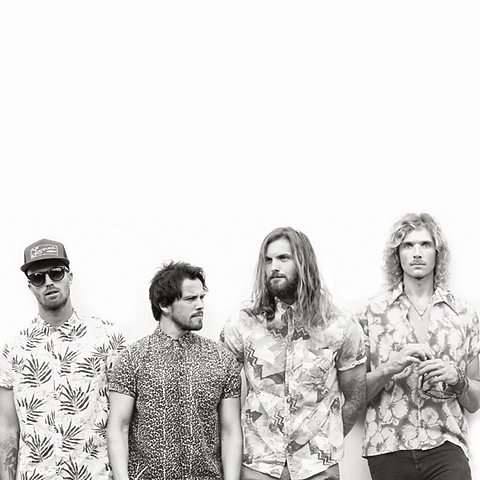 Sunset Sons arrived in Glasgow with a bit of hype behind them: they were on MTV and XFM Great X-Pectations’ Ones To Watch lists for 2015, and they were also longlisted for BBC’s Sound of 2015.

So even for a band just starting to make their way in the public spotlight, you could be forgiven for having high expectations of the quartet before the show. Luckily, they absolutely delivered.

Lead vocalist and keyboardist Rory Williams led the show in so many ways. As the singer, of course he is generally going to be the focus of attention, but when he wasn’t at the keys he was injecting a lot of energy into the show with a tambourine. When he wasn’t singing, he was making the whole crowd laugh.

He wasn’t even trying to be a comedian, he just seemed genuinely entertaining, and also genuinely enjoyed the show, often praising the crowd for their involvement.

And it certainly helps Sunset Sons stand out that Williams’ voice is almost unique. The only comparison that can really be drawn is to Caleb Followill of Kings Of Leon fame, but even then there are subtle differences.

Technically the band were extremely tight, they never missed a beat. At times some of the songs sounded very slightly quicker than they do on the recorded versions of the band’s EPs, but that is fairly common. Adrenaline can often make that happen, if it wasn’t deliberate in the first place.

It is important to point out that Sunset Sons are not just a rock band. Most of their work is absolutely rooted there, but Watch Your Back just has a funkier element to it (as well as several changes of tempo), and She Wants is a tad poppier, with a sing-a-long chorus. It is an important element for any band to show diversity – which in this case comes from the range of influences they have.

The highlights from the set – as you may expect – were the lead singles Sunset Sons have already released. Newest single Medicine went down a treat, while Remember is a personal favourite of mine anyway, and did not in any shape or form disappoint.

Sunset Sons generally mix emotive lyrics with energetic and accessible rhythmic guitars to great effect. As I said at the start, they have been tipped for big things, and based on their live show it is very easy to see why. They teased that an album is on its way later this year, and that is definitely one to keep an eye out for.

Their latest EP, The Fall Line, was released this week and is now available on iTunes and Spotify.