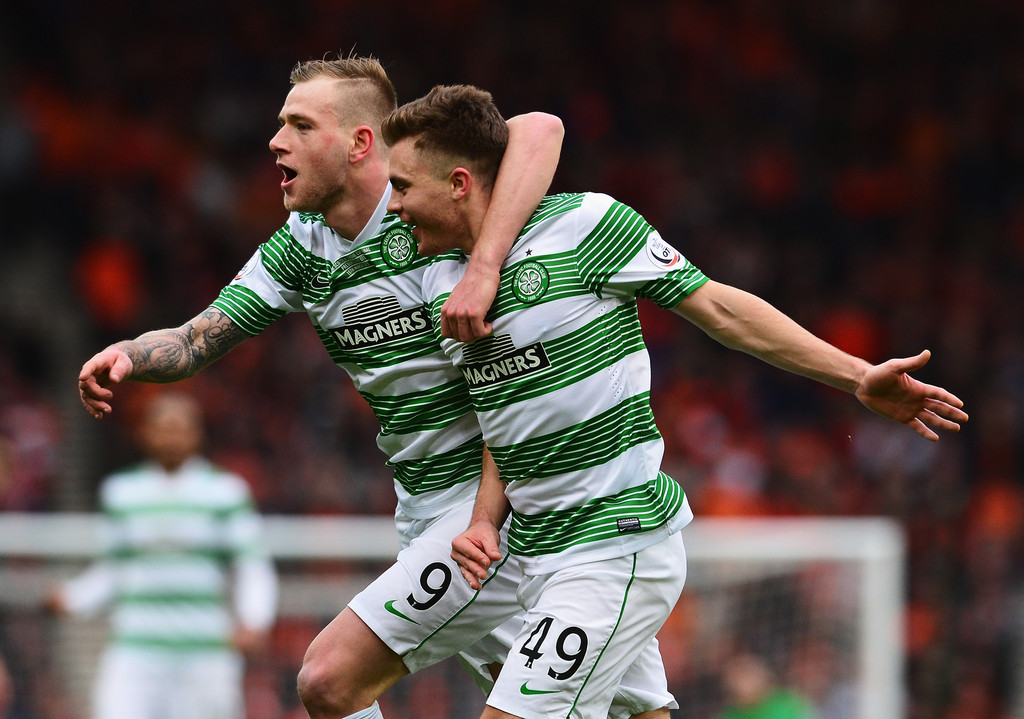 There were several great midfield performances which provided the platform for Celtic to lift the trophy for the first time in six years, but it was Deila’s Norwegian import Stefan Johansen who shone brightest in the middle of the park as the Hoops dispatched McNamara’s hard-working Dundee United side.

Gordon’s first Final since his terrible injury problems was bound to be an emotional one, but the 41-capped Scot used all his experience to stay focused and put in a hugely confident performance. Claimed crosses to ease pressure on his defence and pulled off a great stop early on to deny Rankin.

The lumbering Nigerian put in a typically mixed display, but the good was far outweighed by the bad. Poor positional play was coupled with some terrible distribution, often losing possession for his side when moving the ball into midfield. Lucky that United went down to 10 men to ease their attacking threat.

An imperious performance from the huge Dutchman, his strength and pace nullified the pace and power of the Arab’s frontmen Dow and Bilate excellently. Hard to believe he’s still only 23, it was a grand effort in a Cup Final which only further begs the question why can’t he pull out a performance like this in Europe.

An unassuming but confident showing as always from the young Belgian, bringing calmness on the ball alongside strong tackles which broke up several United attacks. Has formed a formidable partnership alongside Van Dijk this season, and Deila will be keen to keep the Man City player next year particularly with clubs likely to be hovering around him and his fellow centre-back in the summer.

Not his finest performance in a Hoops shirt, but he did enough to maintain Celtic’s impressive League Cup record of not conceding a single goal throughout the competition. Spent a lot of time bombing into the opposition half as always but his crossing wasn’t up to his usual standards. The Honduran was thankful that Dillon’s tackle wasn’t a season ending one.

Bitton has proved himself a fantastic find already for Celtic, and this was another classy performance from the Israeli star. Provided a calm influence from defensive midfield, breaking up play well and distributing effectively from the back. His partnership with Brown in the centre of the pitch has formed the bedrock of all that has been good about Celtic this season.

Much was said about the skippers off-field exploits in the build up to the final, but once again Scott Brown showed why he is so revered by the Hoops faithful with another commanding display. Not his finest performance by any means, but Brown still used the ball well, marshalled the all-important middle of the park and led his players confidently to another trophy.

The Norwegian has perhaps been Deila’s best signing so far, and he ran the show for the Hoops. His passing is arguably the best in Scotland, and he showed his whole range throughout the final, as well as closing down all game in what was a fantastic all round display. Unlucky not to add a spectacular volley near the end which would have rounded off a wonderful performance.

A middling day for the Irish striker, who looked slightly ill-at ease on the left wing which showed in the amount of times he cut inside ineffectually throughout. His crossing was often poor, but he did provide a great ball for Commons all important opener.

Not the best performance from the winger, who by his own admission joked that he was lucky not to get substituted at half-time, but he still scored another big goal in another big game for the Hoops, firing in the rebound after Cierzniak’s wonderful save originally denied him. Could have scored more but skied a few efforts harmlessly over.

A underwhelming performance from the young Scot, who tried his best to influence the game but largely played a bit-part. His movement left him caught offside on more than one occasion, and he saw his only efforts on goal well blocked by the resolute United defence.

The pacy winger made an immediate impact on his introduction in the second half, firing in Guidetti’s excellent pull back. The injury-plagued youngster’s direct running also forced Dixon to bring him down inside the area for the penalty, but his resulting effort from the spot was tame at best. Still a strong showing which shows signs he is returning to his exciting former self.

The big striker had to settle for a place on the bench, but he proved his maturity when he came on by setting up Forrest for the Hoops second. His hunger to take the penalty late on further showed his desire to keep scoring for Glasgow’s finest.

Little time for the young prospect to shine when finally introduced, but he did add some fresh legs late on to a tiring Celtic midfield. The 18-year old Scot is definitely one to look out for in the future.

The Polish stopper put in an unbelievable showing which helped keep the score line a lot more respectable for the Arabs. Unlucky that his world class save in the first half couldn’t stop Commons firing in the rebound, the keeper pulled off several fine stops as well as keeping out Forrest’s late penalty.

An afternoon to forget for United’s captain, who was forced off for an extended period to receive stitches after Van Dijk’s strong challenge in which time Celtic opened the scoring. Had no complaints for the reckless tackle which saw him sent off in the second half. A poor Final showing from the Arabs leader.

A brilliant effort from the huge Polish centre-back, who made several key tackles and clearances as United tried to brace the storm of Celtic’s attacks. Unfortunate to be on the losing side and helped contain the damage once his side were reduced to ten men.

The Geordie defender had his hands full all game, but was resolute and pulled off some brilliant tackles. Two great blocks from Leigh Griffiths and Kris Commons shots helped keep the score line respectable, but ultimately he couldn’t prevent Celtic walking away as champions.

Dixon played well throughout, the full back dealing well with the threat of Commons on the right-wing as well as breaking forward when possible. The Scotland international was lucky that he wasn’t punished for bringing down Forrest after being caught the wrong side of the winger for the penalty.

The Australian looked well at home in the midfield, with some powerful runs which threatened Celtic’s defence on more than one occasion. His direct play helped alleviate some of the pressure on United’s rear-guard, but he struggled to find the key pass to unlock the door for an equaliser.

Almost opened the scoring but saw the Arabs best chance snuffed out by a brilliant Craig Gordon save. The midfield general had to use all his experience in midfield, especially following Dillon’s dismissal, but he was ultimately overrun by Celtic’s impressive midfield trio.

Didn’t make the most of his rescinded red card, with some poor passing which often saw United lose possession at key moments of the game when the Arab’s were looking to break. Made some strong challenges but again was outclassed in the middle of the Hampden Park by the Hoops midfielders.

Butcher was effective if not amazing for the Arab’s, with one block on Anthony Stokes the highlight of an uneventful match for the Englishman. Was forced to defend more and more when United went down to ten men.

The 23-year old Scot was far and away United’s best outfield player, with his direct and confident running often causing panic in the Hoops defence. Despite finding himself frequently isolated up-front, he held the ball up well, ghosted past defenders and won several free kicks. The shining light for the travelling Terrors faithful.

Struggled to fill the boots of the suspended Nadir Ciftci, the injury-plagued centre-forward never looked like getting the better of Celtic’s imperious centre-backs. Was a willing runner though and tried his best to disrupt the Hoops defence before being subbed with 30 minutes remaining

Given the last half hour but found opportunities hard to come by as United struggled on with 10 men. Made a few decent runs but couldn’t help salvage the tie for the Arabs.

The experienced midfielder added some much needed energy to the drained United midfield when he came on, but again he couldn’t help turn the tide as Celtic dominated the latter stages of the game.

First Scottish couple to appear on Gogglebox since 2016

Free period products in Stirling and where to find them