Ronny Deila lifted his first trophy as Celtic boss thanks to goals from Kris Commons and James Forrest in a 2-0 victory over Dundee United at Hampden Park on Sunday afternoon.

Dundee United captain Sean Dillon was sent off for a late challenge on Emilio Izaguirre and James Forrest missed a penalty late in what was a closely-fought encounter between the two teams.

Celtic started to press early on, with United defender Jaroslaw Fojut having to head away a cross from the left. The resulting corner almost saw the Hoops score in the opening minutes, with Van Dijk rising high and heading on target, but United captain Sean Dillon was in the right place to clear it off the line.

The impressive Ryan Dow kept pushing to get through the Celtic defence, but Virgil Van Dijk and Jason Denayer showed why they are both so highly rated.

Deila’s side was almost in again when a sloppy pass back to the keeper from Callum Morris was pounced upon by Leigh Griffiths, but after rounding Radoslaw Cierzniak he could only find the side netting. Dow was brought down by Efe Ambrose, playing in an unfamiliar right-back role for the day, but Paul Dixon’s free-kick couldn’t get over the Celtic wall.

Celtic countered with Kris Commons, but the midfielder lashed a wild effort over from 25 yards out. United broke and Craig Gordon had to be quick to collect from a cross, taking out both John Rankin and teammate Van Dijk in what appeared to be a telling tale of the match. Celtic were struggling to create real chances, while United looked dangerous on the break.

A shaky clearance from Gordon saw Dow have an open net, but the young Scot couldn’t find the net from range, and Van Dijk used his strength to see off McGowan’s run. Nir Biton, sitting very deep in the first half, played a lobbed ball to Commons at the back post, but could only collide with Sean Dillon, and the latter needed to head off the pitch for treatment.

In doing so, the Arabs went down to 10 men but it didn’t look to affect them, with Dow causing trouble in the attacking third again. With a nice bit of skill to turn past Izaguirre and Scott Brown, the captain brought him down on the edge of the box.

However, Celtic broke quickly, and Anthony Stokes’ cross found Commons, whose right-footed effort deflected off Fojut which called on Cierzniak for a world-class save. However, Commons was quick to the rebound, and slotted in from a tight angle, leaving Cierzniak to lament his back four. 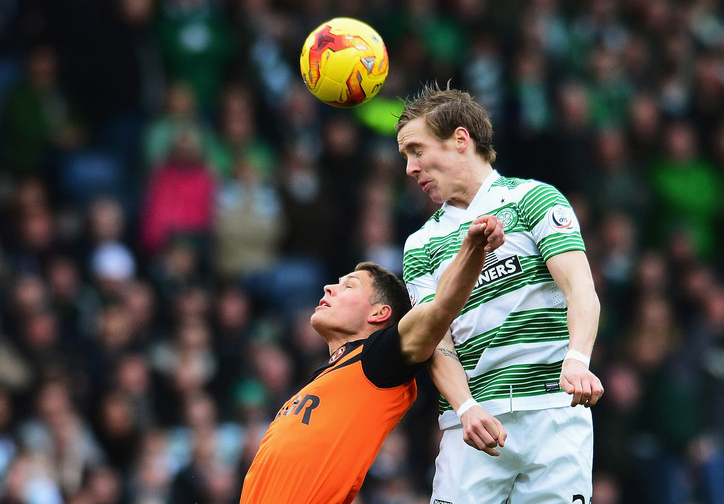 Dillon returned to the pitch following a 10 minute absence, denying Blair Spittal a cup final appearance, and Ryan McGowan had to make a tactical foul to prevent Scott Brown from getting in on goal.

Commons turned three United defenders before unleashing a great shot, which made Cierzniak get low to produce another great save. Both sides had claims for penalties just before half-time but referee Bobby Madden denied both claims and called for half-time.

Celtic came out swinging after the break; Stokes cutting in from the right to set up strike-partner Griffiths, but the cross just evaded the Scotland international.

Mario Bilate will rue his missed opportunity after dwindling on the ball instead of taking Denayer on and his late shot, deflected off Van Dijk. Minutes later Bobby Madden had his card out to send Sean Dillon off for a late change on Izaguirre.

Stefan Johansen stepped it up a gear, and was pulling the strings with his pin-point pass finding Griffiths in the box. But the striker failed to control the ball in what was a poor game for him. With United under the cosh, Deila decided to bring on the pacey James Forrest and Swedish striker John Guidetti to freshen up his attacking options.

It almost bore fruits immediately with Gordon’s quick-thinking throws putting Ambrose on a run. He split the defence with a pass to Guidetti, but – instead of taking it on – he tried to cut it back to Forrest, and the move broke down.

Johansen crossed for Denayer, but the young Belgian headed an effort went just too high. Norwegian international Johansen was clearly in the mood, and found his way into the box and looked to have overran it. But after cutting back to Guidetti, the on-loan City striker laid it off to fellow substitute Forrest, who smartly finished inside the near post – United’s defence and goalkeeper were left stranded with 10 minutes left to go.

Forrest took confidence from his goal and kept going at left-back Paul Dixon. Yet, he was brought down inside the box with five minutes to go – Madden pointing to the penalty spot. After arguing with Guidetti over who was to take it, the Scottish youngster fired straight down the middle and Cierzniak saved to keep the scoreline respectable in what was a professional second-half performance from the Hoops.