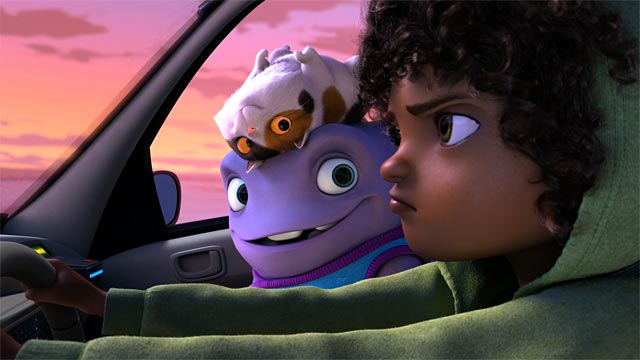 It is always a pleasure when you go to the cinema on a rainy day to see a quietly publicised film and expect it to be a total flop, but it turns out to be the highlight of your weekend.

Home happened to be one of those films. A new Dreamworks release that has had little media coverage in the UK, and one which audiences were expecting to be a mediocre distraction, while the animation geniuses worked on something far more exciting like the Prince of Egypt (1998), the Shrek franchise (2001-2011), and How to Train Your Dragon I and II (2010-2014).

But Home was a special little film about a darling little alien race called the Boov (I know that name maybe wasn’t the smartest-right?) So these Boov – who are made of bright colours and quirky personalities – have come to Earth to escape their own former galaxy in fear of attack.

But they’re not like other aliens in films, as they are not baddies, no. They don’t get rid of the human race, they just move them all to Australia while the Boov make themselves at home.

However, it does go a tiny bit wrong when a very silly little Boov called Oh (Jim Parsons) accidentally sends an invite to their enemies in another part of the Universe. So, Oh has to go on the run to escape the wrath of the Boov and their crazy Captain (Steve Martin), who are sick and tired of all his messy mistakes.

But as Oh attempts to hide. He comes across Tip (Rihanna), who is on her own journey to find her lost Mum. So after a little bit of drama, the unlikely pair club together to save the Earth; right their wrongs, and, in their own cute little way, discover the meaning of family and home.

Overall, Home was a warm and fuzzy tale, that wasn’t high maintenance or attention seeking, but subtly fantastic and sweet for all ages.

It wasn’t overly Americanised, but shied away from too much cultural exploration.The soundtrack was very upbeat and fun, and entirely created by Rihanna herself. The characters were a laugh and a visually unique treat.

And the story was a gentle reminder that mistakes happen, and life is all about doing your best, and accepting people as friends for being themselves, and for bringing their own little groovy-“Boovieness” into our lives.