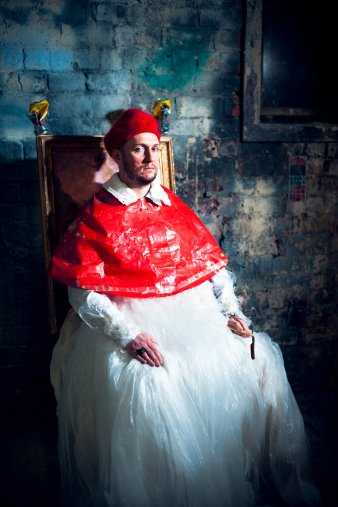 Long Live the Little Knife is an absurdly refreshing piece of theatre, written by the highly creative David Leddy.

Originally developed with support from the Royal Shakespeare Company and performed at the British Museum, this edgy, provocative, and animated play has found its way to Stirling’s Macrobert Arts Centre – and has certainly made an impression.

The Macrobert theatre was transformed into a mass canvas (a haven for all artists), and the scene was set for the exploration of visual truth and trickery in this distinctive, multi-layered live act.

Long Live the Little Knife follows the murky story of Liz and Jim who are small-time con-artists, who buy and sell forgeries, mainly in the form of handbags.

But after some ups, and many more downs, this cheeky pair find themselves in desperate need of a whopping great deal of money to buy their way out of a turf war.

Their spectacularly doubtful plan to sort their troubles is to become the greatest art forgers in the world, and sell it to a bunch of wealthy thickos who won’t notice a thing…they hope.

There’s only one problem: they are rubbish painters.

As the two hoax their way into convincing their dim-witted buyers that they are legit, it turns out that the poor audience is being led for a merry dance too.

It becomes clear that for all their charisma of the central pair, they are as untrustworthy as robbers in the night.

The beauty of the play is that Leddy loves manipulating and challenging his viewers while they sit back, and watch as adrenaline-addicted victims.

It requires your imagination to keep up; tracking a fast current of role-playing re-enactments, and clever diversions of the eyes and mind.

Every time a solid fact presents itself as our ally, it crumbles away into dust.For example, where are Jim and Liz from? Are they on the run? Are they working with false identities? Are they living in actuality? Or are they escaping reality and why?

It’s sometimes mystifying, often exasperating but always alluring. If you come away confused and dazed and wondering what on Earth happened…I think the play has worked its enchantment.

Another thing that was certainly noteworthy about this play was the skill of the third cast member who lived in the shadows. This hidden being’s complex management of the various sounds, visual aids, props, and lighting shifts was phenomenal, and highly atmospheric; contributing wonderfully to the ambiance of the whole event.

But all in all, the play was more than just an engaging narrative, or a pensive journey into the lives of some intriguing characters. It was a quest to discover the blurred lines between right and wrong, reality and falsity, and who decides which is which.

Long Live the Little Knife is one of those plays that is so wildly mad and unconventional that it cannot possibly be boring or clichéd right from start to finish.

It is full of crazy intrigue and one which could easily be seen over and over again.

And why is it called Long Live the Little Knife? Well, it would take far too long to explain. Plus – spoilers!

"Boovie-up" your day with a ticket to Home