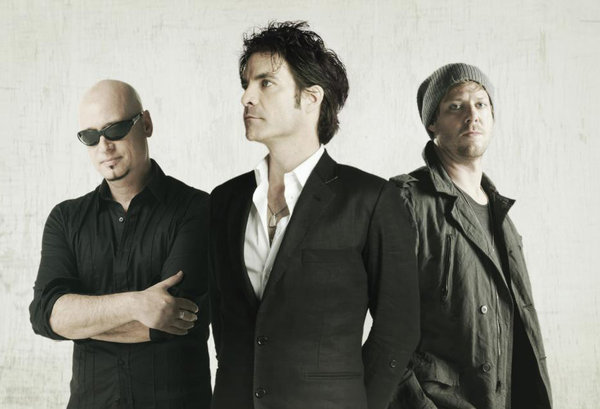 Starting the night by saying that they’d be performing the longest set they’ve ever done in their 22 year career, Train certainly didn’t disappoint at Edinburgh’s Usher Hall; allowed for a much more intimate show than their last in Manchester.

Support acts Natasha North and The Magic Numbers stirred up the audience with sing-alongs and proclamations that Scotland always has the best crowds.

North is definitely one to watch; a folk singer-songwriter whose song “Fire” really allowed her to show off the strength of her voice with just her and an acoustic guitar.

The Magic Numbers gave off a similar vibe to Haim, getting passionately lost in the music and dancing around with their guitars.

With such a long back catalogue of tracks to pick from, Train performed an eclectic mixture of styles from country, to rock, to ballads, to disco.

Pat Monahan’s flawless vocals carried off all of these styles with ease and this show allowed him to show off the extreme tonal range of his voice – during a sing-along to “Free” his voice went high enough to almost rival Prince.

It was refreshing to see such a big band’s show more reliant upon talent rather than spectacle as well, with a very stripped back set and just multi-coloured lighting used to add their own sense of grandeur in such an already grand venue.

This was a real test of Monahan’s showman skills but he carried himself with ease – a swagger, similar to that of Robbie Williams, whilst taking selfies on fans’ phones during “Bruises”.

They threw signed t-shirts into the audience and sang without a microphone, but still filling the 2,200 capacity hall with sound at one point. All of this while hitting every note, “Give It All” being a particular showcase of this with minimal instrumental support.

Closing their set with the one-two punch of their biggest hits “Hey, Soul Sister” and “Drive By” (before a three song encore) saw everyone in the electrified crowd dancing and singing like there was not tomorrow, from mums and dads to children.

Anthems such as these were when the audience was most excited but even during album tracks from their most recent album “Bulletproof Picasso” the audience may not all have been singing along but they were certainly in awe of such a talented live band.