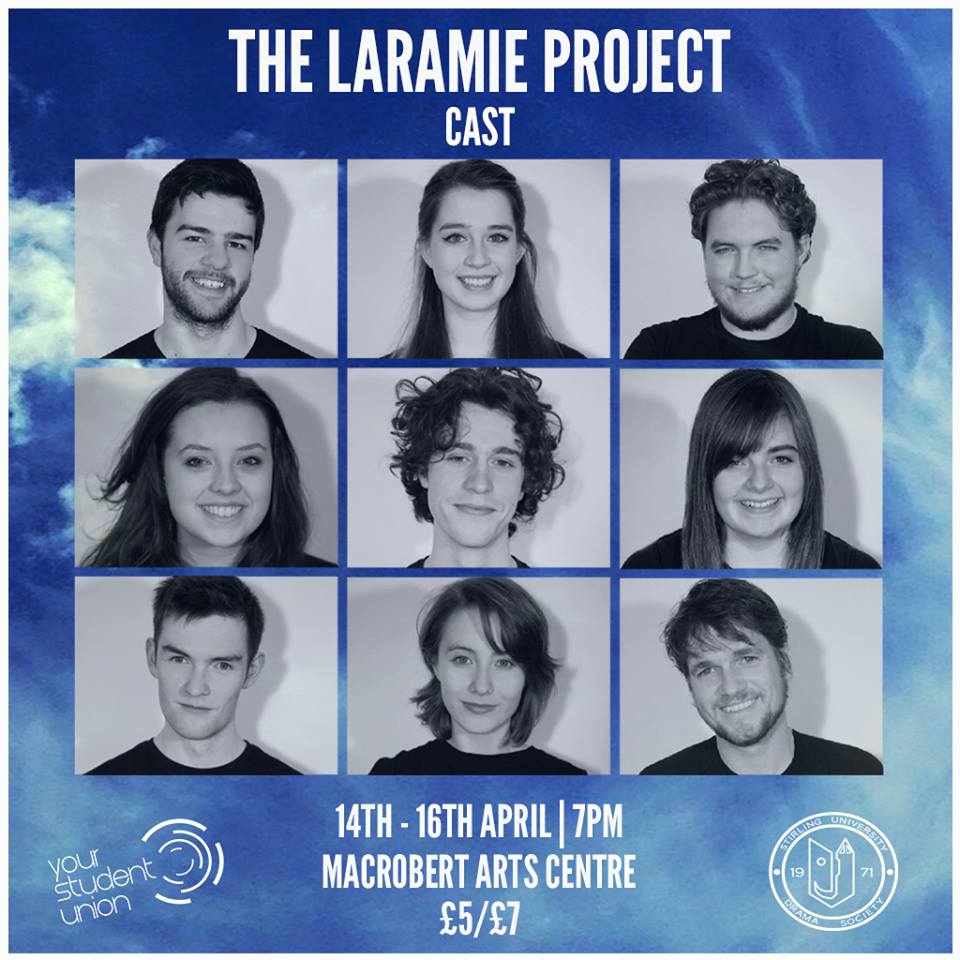 In 1998, Matthew Sheppard was kidnapped, attacked and left to die on the outskirts of a Wyoming town called Laramie. All of this happened because he was homosexual. In light of his death, the community of Laramie and the USA as a nation entered into a controversial debate about the rights, attitudes and social treatment of those with diverse sexualities.

As a result, Matthew’s story has been depicted in a very unique play called, The Laramie Project, and this April the Stirling University Drama Society (SUDS) has decided to perform their own interpretation of the play which will take place on the 14th-16th of April.

Brig has talked to one of the Directors, Kieran Skelton, to find out now about SUDS journey with such a sensitive and important story.

TELL ME ABOUT THE LARAMIE PROJECT?

In 1998, a 21 year old homosexual man named Matthew Shepard was found tied to a fence after suffering a homophobic beating in Laramie, Wyoming. The attack captured the attention of the national media and divided the U.S public. In the months following the incident, the Tectonic Theatre Project travelled to Laramie 6 times to conduct over 200 interviews with residents of the town. The play is the result of these interviews and shows 9 actors playing over 60 different roles in order to give the audience a glimpse of how individuals in Laramie felt after the incident.

WHY HAS SUDS CHOSEN TO PERFORM THE LARAMIE PROJECT?

The Laramie Project is very different from anything we’ve attempted in recent years. Each actor must portray multiple different roles, each of which is a real person being interviewed after a very poignant moment in their lives. Each utterance made on stage was once recorded by the Tectonic Theatre Project during their trips to Laramie, giving this play an edge rivalled by few others. Ultimately however, SUDS recognised the feeling and the messages which make The Laramie Project important. It’s a very easy play to become passionate about.

WHAT DO YOU FEEL IT’S MOST IMPORTANT MESSAGES AND THEMES ARE?

BECAUSE THE PLAY IS VERY RELVENT TO A PARTCULAR AMERICAN DEMOGRAPHIC, DO YOU FEEL IT IS RELEVANT TO A 2015 BRITISH AUDIENCE? AND WHY?

In many parts of the world legislation and attitudes towards the Lesbian, Gay, Bisexual and Transgender community have improved since 1998; however that by no means invalidates the messages presented by The Laramie Project, nor does it mean that improvements are occurring everywhere. A Laramie resident named Zubaida Ula is seen in the play to criticise those who distanced themselves from the crime. Instead she claimed that as residents of Laramie they would have “to own this crime”.  By doing this show, we are acknowledging that the issues raised are still relevant, even if we cannot always see them.

HOW ARE PEOPLE CHOSEN TO DIRECT A PLAY/PERFORMANCE IN SUDS? ARE THEY ELECTED? DO THEY PUT THEMSELVES FORWARD?

Each semester, SUDS hosts a play proposals night where individuals make a pitch to members of the society who then vote on the play they would like to do. Lucy Rodger and I put forward The Laramie Project for this semester and were very glad to see it voted in.

WHAT DIRECTIVE STYLE ARE YOU TAKING WITH THIS VERSION OF THE LARAMIE PROJECT?

In terms of direction, I knew that The Laramie Project only works if the cast are on board with the issues of the play. The actors have all been researching the people they play and really involving themselves in the process. We’re also engaging the 4th wall a lot throughout the performance in order to invite the audience into the piece.

WHY DID YOU WANT TO DIRECT THIS PLAY? WHAT IS ITS VALUE AND SIGNIFANCE TO YOU?

I have seen this play performed 3 times and have read it multiple times. I have witnessed the influence it can have on its audiences and appreciate the importance of doing it. Since the first time I saw it, it’s been an ambition of mine to be involved in it in any capacity. In a way, I want to share Matthew Shepard’s story with as many people as I can.

BECAUSE IT IS PERHAPS AN UNUSUAL FORM OF STAGE LITERATURE, DO YOU FEEL THERE HAVE BEEN ANY SIGNIFICIANT CHALLENGES IN WORKING WITH IT, AND HOW HAVE YOU OVERCOME THEM?

At times in the rehearsal room, this has been a heavy play to work on. The actors have the pressure of knowing that the actors they are portraying are actually real people and that the play is a dedication to someone’s life. They have responded well to this, but I think one of the keys to this is relaxing during the rehearsals and being able to enjoy it, as you would with any other play.

HAVE THERE BEEN ANY SURPRISINGLY POSITIVE LEARNING CURVES WITH WORKING WITH THIS PLAY?

While publicising this play, it has been refreshing to see how welcoming people have been. We have spoken with all sorts of people about the issues of The Laramie Project, and have yet to meet any negative or even hesitant individuals. Additionally, there have been moments within the rehearsal room which I’ve never felt working on other productions. I think because these are real people, the hard-hitting moments just have more of an impact. You know that what the actors are saying has actually been said before by someone in such a profound moment of their life.

HAS SUDS DONE A LOT OF WORK RESEARCHING THE STORY’S BACKGROUND AND HOW IT HAS BEEN INTERPERATED ELSEWHERE?

Each of the actors has researched their characters in depth, and have actually found very touching stories. We have also reached out to several societies on campus such as LGBT, PolSoc, Musical Theatre and Gender Equality Movement.

BECAUSE THIS IS A REAL STORY, DO YOU FEEL THERE IS ANY WEIGHT ADDED TO SUDS RESPONSIBILITY IN THEIR HANDLING OF THIS DELICATE STORY?

Yes. Definitely. There is a line in the play which reads, “I will speak with you, I will trust that if you write a play of this, that you say it right. You need to do your best to say it correct”. This is not just another play that you can mess around with. You need to really put effort into it. It’s an honour to be able to work with it. We can’t be half- hearted about this or it won’t work.

IS THERE ANYTHING YOU WANT TO SHARE WITH STIRLING STUDENTS OR OTHER RESIDENTS ABOUT WHY THEY SHOULD SEE THE LARAMIE PROJECT? OR WHAT TO EXPECT WHEN THEY DO?

The Laramie Project is unlike any play you will ever be likely to see. It’s real; every line said on stage was once said by someone experiencing a crucial part of their life. By watching The Laramie Project, you have the ability to become involved in the story of Matthew Shepard.

The Macrobert Arts Centre have #SavedYouASeat

The trash TV that got me through 2020

Belfast Review: A fairytale for the history books ★★★☆☆

'Belfast' is let down by its romanticised version of the past, but will win audiences through…