Stirling University Boat Club put in an impressive display at their first regatta of the season, as Strathclyde Country Park played host to the 2015 Strathclyde Park Regatta and Scottish Student Championships.  Staged across the weekend of 25-26 April, the event offered the first chance for the club’s freshers to compete upon the national stage, whilst simultaneously providing the season’s first opportunity to challenge for national honours.

Kicking off the weekend’s action was the Ladies Beginner Coxed Four.  A crew composed of Amy Strachan, Cat Murray, Shannon Purves, and Svenja Bernhardt, coxed by Alyssa Rodrigues, flew the flag for Stirling in their first ever competitive outing as a crew. Despite only recently coming together as a unit, the crew belied their relative inexperience to claim third place in their heat.  Agonisingly missing out on a spot in the final by a single place, there can be no doubt that this group is one to watch in future events.

Freshers Paul Gardiner and Alex Hill were next to take to the water for Stirling, as they competed in the Men’s Beginner Double Scull.  An incredible performance saw them claim SUBC’s first medal of the championship, as they stormed home to claim second place and a well-deserved silver medal.  The second fastest crew in Scotland in their discipline, you can be guaranteed that this pairing will have their sights firmly set on more honours in future.

The next event saw two SUBC members go for glory, as Elijah Mtonga and Niels Henning competed in the Open Novice Single Scull.  Mtonga was unlucky to miss out on a place in the final, being squeezed out of the qualifying positions by a single spot.  However, his club-mate Henning encountered no such trouble, easing to a win in his heat to qualify, and looking strong.

The final saw an enthralling battle, as Henning and his counterpart from Dundee University fought it out for the title.  In a close run battle, Henning did just enough to claim gold for Stirling, and provide the club’s first title of the regatta.

There was also an opportunity for Alex Hill, fresh from his silver medal earlier in the day, to enter his first ever solo race.  Competing in the Men’s Beginner Single Scull, Hill performed admirably, coming home fourth in the final.

Rounding off the action on the opening day was the Women’s Novice Double Scull, where Stirling saw themselves represented in three crews.  Amy Strachan and Cat Murray battled through the horrific conditions in their first outing as a double, gaining valuable experience for future competitions, whilst Svenja Bernhardt and Shannon Purves’ terrific effort was rewarded with a fourth place in their heat.  Rhona Smith also claimed fourth place in her heat, as she teamed up with a member of Heriot-Watt’s boat club to form a composite crew.

The weather showed no sign of relenting as the second and final day of competition arrived.  However, it proved to be no deterrent for Stirling’s representatives in the Ladies Beginner Single Scull, as Shannon Purves, Hayley March and Svenja Bernhardt took to the water. Bernhardt showed promise in her heat, as an excellent showing in the first half of her heat was ultimately only bettered by the more experienced competitors from Edinburgh and Durham, whilst March narrowly missed out on a place in the final, a strong debut race for SUBC seeing her finish fourth in her heat. Purves turned in a brilliant performance to take second place in her heat and qualify for the final, before the worsening conditions prevented her from challenging for the title.

Next up was the Open Novice Coxed Four, with senior squad members Sebastian Lawson-Thorp, Robert Nicholls, Elijah Mtonga and Niels Henning forming a strong Stirling quartet, with Alyssa Rodrigues guiding them from the cox seat. In a strong field of sixteen boats, the crew from SUBC fought their way into the final from a close heat, before finishing fifth in their final.  However, having finished as the fifth fastest boat in their class, the crew can be satisfied with their performance, as they look to kick on in the rest of the season.

The weekend drew to a close with the Ladies Beginner Double Scull. Cat Murray and Amy Strachan came up against a field including SUBC teammates Shannon Purves and Svenja Bernhardt in a race that promised to be extremely competitive.  However, both teams turned in outstanding performances.  Murray and Strachan took fourth, whilst Purves and Bernhardt showed the strength of their pairing by claiming an excellent silver medal.  With crosswinds in the region of 20mph, the scale of the achievements of both pairings cannot be underplayed.

Whilst battling against the elements as well as their opponents, the members of SUBC will undoubtedly be proud of their efforts.  With valuable experience garnered at the event, and extensive work at training beginning to pay dividends, the focus now will surely be on ensuring the success of the meet is built upon throughout the rest of the season. 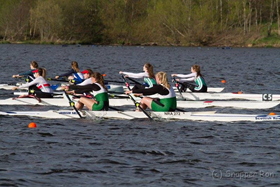 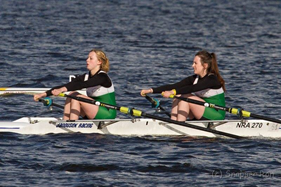 SUBC are back in action at the BUCS Regatta, held at the National Water Sports Centre in Nottingham on the 2nd to the 4th of May.

Get free entry to Fubar and donate to a good cause at the same time!