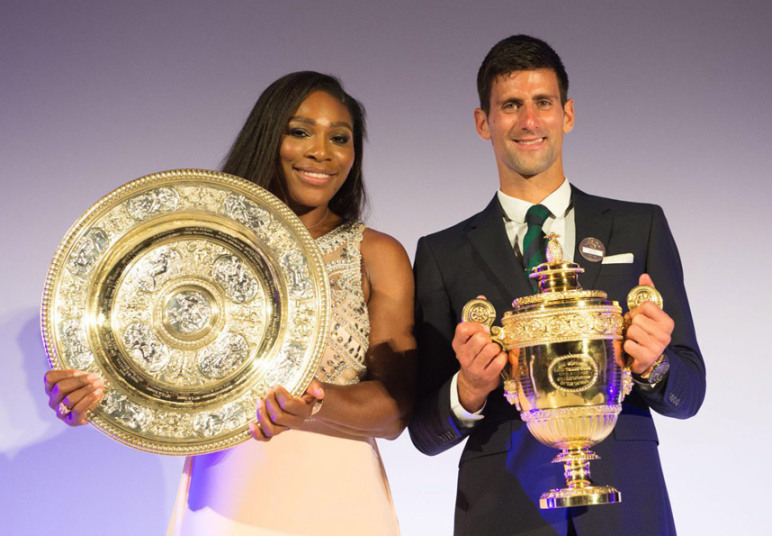 Serena Williams underlined her credentials as the world’s greatest current tennis player, as she claimed her sixth Wimbledon singles title, beating Garbine Muguruza in straight sets.  The 6-4 6-4 victory sealed the much-anticipated “Serena Slam” for the second time, as the 33 year old American became the current holder of all four Grand Slam titles, and denied Muguruza her first major title in her first Grand Slam final.

It was a nervous start from Williams, however, as three double faults in her opening service game allowed the twentieth seed Muguruza to break the fabled American’s serve at the first time of asking.  The first Spanish woman to make a Grand Slam final since Conchita Martinez at the 2000 French Open, the 21 year old showed no signs of being overawed by the occasion, frequently asking questions of the top seed with precise and powerful groundstrokes, and racing into a 4-2 lead in the first set.

Williams began to find her range, however, with some incredible movement allowing her to dominate points from the baseline, and regain the break of serve from her opponent.  An incredible forehand winner down the line brought the world number one the first set, to rapturous applause from the Centre Court crowd.

The second set began where the first left off, with Williams exerting pressure on Muguruza, and seemingly cruising to victory.  The young Spaniard was, whilst playing well, struggling to find an answer to the class of the legend across the net.  When Williams broke her to move to a 5-2 lead and about to serve for the match, it seemed that the match was close to its end.

Instead, Centre Court witnessed one of the great displays of defiance by a Grand Slam finalist.  Muguruza broke serve to love, before playing a sublime game to take the scores to 5-4.  Indeed, it appeared that the great Williams was faltering just when it mattered most.

There was to be no fairytale ending for Muguruza, however.  With that trademark serve, on its day almost unplayable, Williams wrapped up her 21st Grand Slam title, moving to within one of Steffi Graf, and, tantalisingly, within three of Margaret Court, the holder of the outright record.  Whilst the tennis media were united in their praise of Muguruza, surely destined to win a Grand Slam soon, all the talk is now of when, not if, Serena stakes her claim for the all-time record.  Who would bet against it?

In a rematch of the men’s singles final of twelve months previously, the top two players in the world faced off in the Wimbledon final.  Roger Federer was looking to add to his seven previous titles, and in doing so move clear of Pete Sampras at the top of the all-time Wimbledon singles titles chart.  In his way, however, the world number one Novak Djokovic, the defending champion and attempting to banish the memory of his loss to Stanislas Wawrinka in the final of the French Open.  With both men in great form, it was expected to be close, as it nearly always is between two greats of the game.  However, with many pundits calling his performance in his victory over Andy Murray in the semi-final one of his greatest ever, Federer went in as perhaps the slightest of slight favourites.

The first set was a tight affair, with both players breaking the other’s serve in the opening three games.  With some sublime shots played on both parts, in particular a cross court backhand from Federer that had the great and good of Centre Court on their feet, the match soon reached the quality expected of a Grand Slam final.  Despite the best efforts of both men, a tiebreak ensued, and it was Djokovic who pounced, taking it 7-1- the first set was his.

However, Federer showed just why he is regarded as one of the greatest of all time in the second set.  With neither player able to produce a break, spectators were treated to one of the all-time great tiebreaks.  Outstanding tennis from Djokovic took him to set point time after time, only for the old master to repeatedly produce moments of magic to deny him.  In all, seven set points were saved by the Swiss genius, before he claimed one of his own to take the tiebreak 12-10, and level at one set all.

Whilst other players might have buckled under the psychological fallout from the second set, Djokovic instead went to another gear.  Now consistently threatening Federer’s serve, he broke at 4-3 in the third set, and held the break to take the set 6-4.  With the 33 year old rapidly running out of answers, the Serb went for the kill.   His renowned return of serve causing his opponent grief time after time, Djokovic took the fourth set 6-3 and, with it, his third Wimbledon title, equalling the tally of coach Boris Becker.  Whilst romantics may mourn Federer’s defeat, it’s hard to look past the outstanding display of Djokovic, who underlines his credentials as world number one once again on the biggest stage.