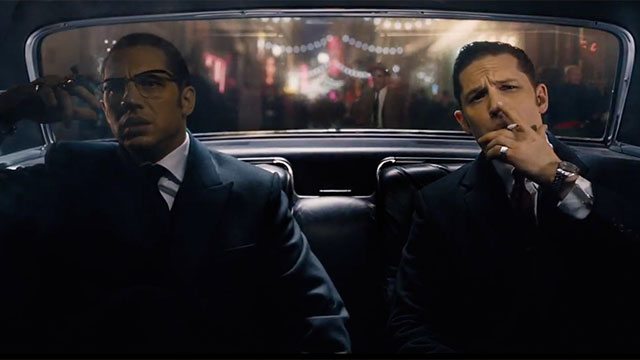 From the offset, despite the voiceover coming from Emily Browning, ‘Legend’ is clearly Tom Hardy’s film and he certainly lives up to the hype even if the film itself isn’t without its flaws.

Hardy’s one-two punch of a performance as both Ron and Reggie Kray, the notorious London gangsters, is spectacular. As the mentally unstable, openly gay Ron he gives an outlandish and erratic performance with an abundance of weirdly OTT tics.

His performance as Reggie is more dialled-down, instead employing a softly spoken cockney accent. Whilst this character can also be prone to erraticism, Reggie is played as being more suave and level-headed.

The fact that both of these characters can interact with one another at the same time on screen is astonishing. It was an amazing digital feat achieved here given that the filmmaker didn’t even need to resort to them occupying different halves of the same screen or the camera constantly flashing back and forth between individual frames of them.

Emily Browning, whilst underused despite being quite pivotal to the plot’s central arc, gave a harrowing performance as Frances – Reggie Kray’s doomed wife. Her Cockney accent was surprisingly good, especially given that she’s Australian!

Other highlights of the film are the beautiful 1960s costume and set designs as well as the soundtrack which included classics such as ‘Chapel of Love’ and ‘Somethin’ Stupid’. The fusion of jazz and blues music really set the tone and style of the film.

Much of the first half of the film was largely played for laughs, especially a brutally funny and violent brawl in a pub which was reminiscent of ‘Kingsman: The Secret Service’ earlier this year. After that, as the Kray’s empire grows, the proceedings take a turn for the dramatic.

This resulted in a bit of an issue with the film’s overall tone. Particularly given that they tried to make the audience sympathetic towards characters who employed brutally thuggish violence to achieve power and a man who abused and neglected his doting wife.

Whilst ‘Legend’, despite its length, is never dull and the plot doesn’t take a lull in the middle this uneven tone seemed to be rather jarring. Despite this it was an immensely enjoyable film, as long as you have the stomach for quite a lot of violence!

Film Review: Me and Earl and the Dying Girl

Dawn of the Small Screen Heroes