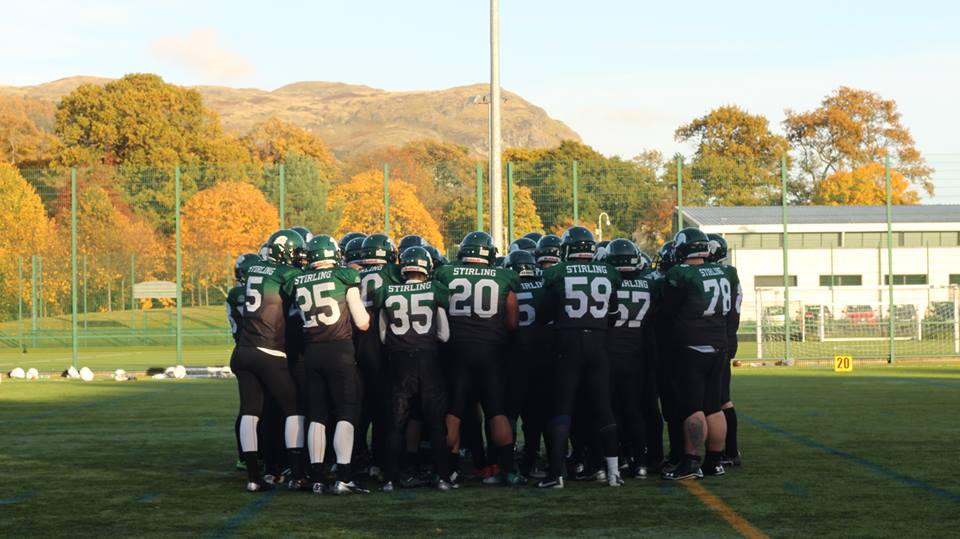 The Clansmen’s third game of the season saw them host the only other undefeated side in their division, the Durham Saints. This match was anticipated to be quite a spectacle, and it most certainly did not disappoint.

It was a wet and windy day; a difficult climate for any team to play in, as the ball gets heavier and more slippery, making it a tough day for the receivers and the quarterbacks. However a spirited Saints team got off to a tremendous start, accumulating a 22-0 lead just a minute into the second quarter. They made a lot of yards by throwing long passes to their experienced receivers, which in the first quarter the Clansmen defence just could not seem to find an answer to. The first touchdown was a lobbed pass, from 20 yards, the quarterback, found a receiver deep at the back of the end zone. However, as with every touchdown they scored, the Saints went for two points, but on this occasion failed, giving them a 6-0 lead.

Not long after, the Saints increased their lead, punching in a second touchdown. Similar to their first score, a twenty yard pass was caught, this time however the receiver caught it outside the end zone, broke a tackle and ran it home. This time they converted the two point conversion, which gave them a 14-0 lead at the end of the first quarter.

Things went from bad to worse for the boys in green. At the start of the second quarter, Durham marched the ball up the field and managed to score their third touchdown of the game. With the two points added, the Clansmen found themselves with a seemingly insurmountable 22 point deficit.

However, the Clansmen began to fight back. They finally found themselves in the end zone, but it was ruled out, the referee deeming that the Clansmen’s quarterback had stepped out of bounds, meaning no score. That drew the half to a close, with Stirling trailing 22-0.

Going into the second half, the champions knew they had a mountain to climb, but with the belief and drive in this team they started out strong. Receiving the ball after half time was the perfect opportunity for the offence to get the momentum onto the Clansmen’s side. And, thankfully, they did just that. A short screen pass was caught by Thomas Campbell on the 30 yard line, before some magnificent running and excellent blocking resulted in the Clansmen’s first points of the match. The Clansmen then added the extra two, when Bence Kovacs ran it in after Malik Mustapha obliterated a defender to create the gap.

With the offence finding their rhythm, it was up to the defence to step up and get the ball back. On the next drive for the Saints, after converting on third and long, they did just that. Back to back sacks, from Kovacs then from Andrea Pasquali, set up another third and long for the Saints. A deep pass was caught but a massive combined hit from James Herd and Ashley Hopkinson forced another fumble which was again recovered by the Clansmen. This drive took the game into the final quarter, the Saints still leading by 22-8.

After a third turnover in as many drives, the offence needed to put points on the board. On this drive they did. After gaining a lot of yards from pinpoint throws from quarterback Andres Donat Garcia, and rushing yards from Thomas Campbell, a 20 yard inside run for a touchdown by Alex Crowe made this a one score game, after the two point attempt was again converted. With time against them, though, Stirling needed the ball back.

Now the momentum was well and truly with Stirling, who knew they only needed one more touchdown to tie the match. Again, some nice gains on the ground and in the air saw the offence earn their third touchdown of the match. From the 27 yard line Garcia threw to Oskar Samuelsson, who beat his defender to the ball and broke into the end zone for a touchdown. For the first time this match, the team failed on a two point conversion, meaning that the scores were tied. From a 22 point deficit, Stirling found themselves level. But the craziness had not even begun.

The defence again forced a three and out, and being backed up to their own 10 yard line Durham made the wise choice to punt the ball. It was one of those games where you knew that it was going take something special to give Stirling the lead. That was where James Lightbody came into the frame. After receiving a catch at the 30 yard line, Lightbody incredibly broke through three tackles and then outran two opposition players to score the Clansmen’s fourth touchdown of the match, and to complete the comeback. It was 28 consecutive points for the team, and a missed PAT kept it at 28-22. It wasn’t over yet though.

Despite turning the ball over, disaster struck for Stirling on the second down, as the ball was fumbled and recovered by the Saints. With under two minutes remaining, all Durham needed was a touchdown to tie the game. To the dismay of the Clansmen, they converted on their first attempt when the quarterback found a receiver at the back of the end zone. Durham went for two points again, meaning they would either win the match if successful, or take us to overtime if they missed. Or so we thought.

On the two point conversion, however, the ball was intercepted by Ashley Hopkinson. With the momentum from catching the ball, he somehow managed to outrun all the opposition players all the way to the end zone, resulting in two points for Stirling. From staring defeat in the face, a miracle play from Hopkinson saw the craziest finish to an American football match that many of us will ever see.

The scenes of jubilation from the players, coaches and the fans on the sideline for the Clansmen were clear to see after a spectacular comeback. A match which will be remembered for years to come, for both the insane comeback and the miraculous finish, to finished 30-28 to Stirling. Never underestimate the character of the Clansmen.