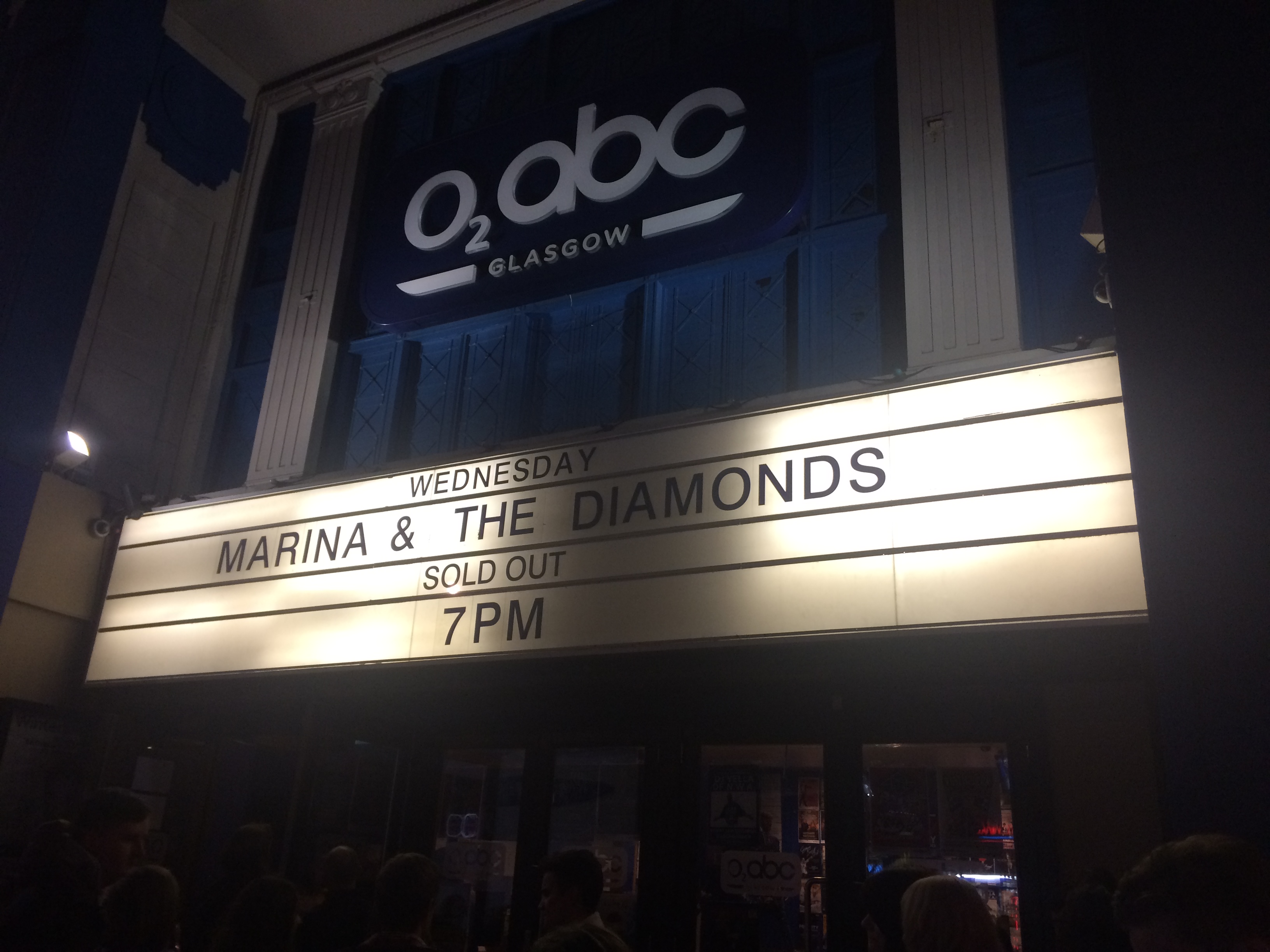 Bringing her Neon Nature tour to a sold out crowd at the O2 ABC, Marina Diamandis wowed in a live-wired performance that really highlighted her evolution as an artist.

She was supported ably, if unspectacularly, by Clock Opera – an alternative band that seemed to be trying too hard to be Alt-J. It seemed quite ironic that such an iconic artist with a suitably brash image to match was being supported by a band with no clear artistic direction. Their first couple of songs got the audience going, before their set ended up being rather monotonous.

Marina’s set was quite the opposite though. Her 90 minute performance was divided into three acts, with one for each album (The Family Jewels, Electra Heart, and Froot). This allowed her to essentially perform a bunch of her greatest hits including ‘I Am Not A Robot’, ‘Hollywood’ and ‘How To Be A Heartbreaker’, as well as most of the tracks from the latest album. It also allowed for her to represent each identity she has adopted for each album. Of course this also resulted in some grand costume changes involving a lot of latex and a lot of glitter. It was during these costume changes that her live touring band had the chance to really shine with their instrumental interludes.

The spectacular set design also had album artwork and the like on a giant screen behind her but the stage really came to life during the third act, in which Marina performed tracks from her new album Froot, with even more lights. During a stand out performance of ‘Can’t Pin Me Down’ the lyrics popped up on the screen and the audience of Diamonds went into a ballistic sing-along.

A really beautiful moment was during the encore when she performed ‘Blue’ and ‘Happy’ (some of the more introspective songs from Froot) with home videos from her childhood playing on the stage behind her. It is the fact that Marina can seamlessly go from brash pop music sing-alongs to sitting at a piano and playing haunting ballads that makes her a revelation of an artist and makes for a fascinating live performance.

It is clear that image and art are very important to Marina, with everything from the light show to the merchandise (including glow in the dark t-shirts!) contributing to the spectacle. This goes hand-in-hand with her distinctive voice and brilliantly blunt lyrics such as “Do you really want me to write a feminist anthem, I’m happy cooking dinner in the kitchen for my husband”.

In between tracks, Diamandis had a great rapport with the enthusiastic crowd. She made a lot of quips, brought out the toy dog from her last tour (much to the delight of die-hard fans whom had also seen her live then) and even started talking about Glasgow’s architecture at one point.

My only gripe with this tour is that one of my favourite Marina and the Diamonds songs, ‘Radioactive’, isn’t on the set. However this was only a minor thing and given that she played so many of her other big songs the set list didn’t disappoint.

This was definitely an immensely spectacular and fun concert and it was on such a grand scale that it seemed almost bizarre to see it in such a small, intimate venue (not that I’m complaining!). Marina Diamandis is a great live performer and didn’t disappoint tonight.

Black Friday – The Nightmare Before Christmas