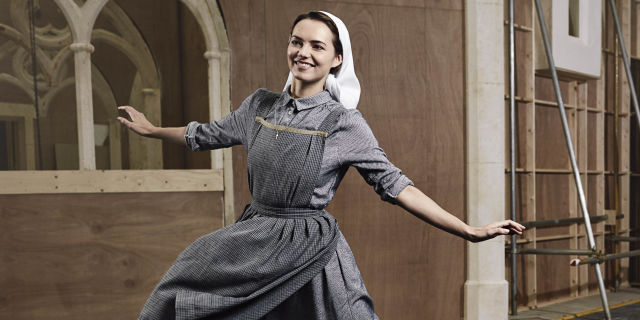 On the 20th of December, four million people tuned in across Britain to watch a new live adaptation of the Sound of Music, a production which has left a lasting impression on fans.

The two and a half hour broadcast was filmed in a studio in London and used seventeen cameras and four main sets to depict the cherished story of love across the classes and enduring integrity as dark clouds descend over Europe.

ITV director of comedy and entertainment Elaine Bedell has said: “I’m delighted for the production team, the cast and the crew that this dauntingly ambitious production of the world’s most-loved musical came together in such a brilliant way, and we are proud to have offered viewers something truly distinctive and special in our Christmas schedule.”

But what did the public think of this ambitious project?

Many commentators on Twitter have approved of the production and called it, “fresh,” “lively,” “stunning” “faultless,” and “impressive for a live show.”

The performance certainly played through without any hitches, well, all but one. Jessica Burden who played the young Marta Von Trapp fell during one scene but the incident was quickly and naturally covered up by Kara Tointon.

The scenery was generally very beautiful and atmospheric; giving the whole production a sense of reality and splendor. One viewer said, “The scenes are stunning. So much colour and depth. It was enticing and highly impressive.”

The acting was excellent. The highly talented Katherine Kelly who played the glamorous Baroness Schraeder may not have been the main attraction, but her charisma and magnetism made her the focus of attention in many scenes. Likewise, the well-known face of Alexander Armstrong who played the cheeky Max Detweiler was a cheerful and highly amusing addition to the cast.

However, not everyone was quite so pleased with this live adaptation and many took to Twitter to voice their disappointment and concerns.

For a start, some claimed that Kara Tointon’s Essex accent was distracting and, “grated,” on the rest of the production. One viewer said, “There is nothing wrong with an Essex born lead! But her accent was a stark contrast with the rest of the cast and it became uncontrollably frustrating.”

Others were not so pleased with the sets and complained that the limitation of four sets would be suitable for a live theatre production, but was shoddy for a high profile TV production that had a large budget and extensive resources.

Many viewers complained about the acting and it was referred to as, “dull,” “dead,” “unrealistic,” and, “stiff.” One reviewer referred to Kelly and Armstrong as, “The rescuers of the show! They offered the glitz and pull that the leads lacked.” Another said, “Tointon was exaggerated and Ovenden was vacant and lifeless.”

One other criticism what that the performance felt too rushed. It moved quickly between scenes without many of the linking scenes found in the film and brought forward events or songs earlier than the film did. However, this comment has generally been brushed aside and accounted for by the fact that a stage production, no matter how impressive can never offer the same pacing or movement of a film.

However, the main complaint was about the re-organisation of songs. The public have gotten used to the beloved songs from the musical and the memorable moments they appear in the film. But the live show this year changed the order and timing in which they were sung, and fans felt this took away the influence and purpose of the songs.

But what did this reviewer think? Well, in many ways I agree with both sides. I think that some of the acting and singing lacked the allure and precision necessary to live up to the film’s name or make the live adaptation compelling. However, Kelly and Armstrong were certainly sensational and truly kept the performance going.

I personally thought the sets were beautiful and of high quality and were very impressive for a stage production.

The placement of the songs was quite disappointing at times, but it is important to remember that a stage production does not have the same freedom as a film and ought to be given leeway.

Overall, the 2015 live adaptation of the Sound of Music was not perfect, but it had many more highs than lows and added something different and heart-warming to my Christmas TV schedule this year.

Christmas Films for all the Family