When Valentine’s Day comes around, it makes us all think about our favourite men and women from films and literature, and we think about that one fictional character who makes us believe in love. Now everyone is different, but for me it is Jane Austen’s men who tell it like it really is. Mr Darcy, Mr Bingley, Colonel Brandon and Mr Knightley, they’re all different, but to me, they all tell us something important about love eve in the 21st century. So let’s have a look at these two hundred year old Romeos and see what they say about romance.

Quote: “In vain have I struggled. It will not do. My feelings will not be repressed. You must allow me to tell you how ardently I admire and love you.”

Mr Darcy is without a doubt Austen’s most famous and popular Mr Right. Darcy starts off in the novel, Pride and Prejudice, as an arrogant, rude and thoroughly dislikeable person who no woman in her right mind would want to marry. But Pride and Prejudice is all about hidden depths and how in reality we need to take time to get to know people before we form opinions. And those men who come across as charming and sincere, can often be a snake in the grass, but the ones who appear selfish and unkind, are often the most genuine of all, but just need some TLC. Of course, in the end Darcy proves that he is the ideal man and that true love isn’t about dramatic romance, but is about honest and steadfast loyalty.

Quote: “She is the most beautiful creature I’ve ever seen.”

Ok, so Mr Bingley might not be the main man in the story of Pride and Prejudice, but we do have some important lessons to learn from him. Bingley is the opposite of Darcy and is the definition of sweetness and from the word go. But Bingley teaches us that our backgrounds and families may oppose our love, but if we really want to be with someone, then we have to put them first and defy all the negativity. He also reveals that everyone is different. While some women might want tall, dark and handsome, Bingley is a very different model of a man. But love isn’t about stereotypes and social expectations, but about being yourself both physically and characteristically and being with someone who accepts you just the way you are.

Quote: “There are as many forms of love as there are moments in time.”

Edmund Bertram is a controversial Austen man. Bertram, who ends up marrying his cousin Fanny Price at the end of the novel, doesn’t look at her and feel love at first sight. Nope, Edmund and Fanny live in the same house for over a decade and are as close as can be, but he doesn’t feel the tug at his heart strings for many years. Bertram chases after the shallow and manipulative Mary Crawford, but soon realises that love isn’t about looks or flirtation. Bertram finally understands that true and lasting affection is between two best friends who really get each other, and is about something much more substantial than just physical attraction. 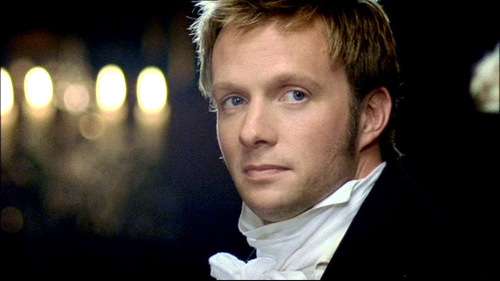 Quote: “You pierce my soul. I’m half in agony, half in hope. For you alone I think and plan.”

Once again, Captain Frederick Wentworth isn’t the most popular Austen hero. Wentworth was in love as a young man with Anne Elliot, but when he proposed she said no because she felt he needed to concentrate on his career. But years later when Anne is feeling like an old maid, Wentworth comes back into her life. But he hasn’t got starry eyes and romantic words for Anne. Nope, he offers nothing more than cold distain as he flaunts his new romances before her very eyes. But it turns out that the frosty exterior is just a façade as Wentworth and Anne are still madly in love with each other, but are just hurting from the past. So even although Wentworth might not have bucket loads of integrity or consideration, Persuasion is a book that shows that love can sometimes take a long and complex road. And even although we might not be snuggling up and eating chocolates together from day one, true love withstands time, endures all things and doesn’t fade.

Quote: “Love is never forceful or deceitful. Love is freedom.”

Colonel Brandon is the ultimate character who represents quiet and determined love and patience. When Brandon falls in love with the young and romantic Marianne, he feels that his dreams of happily ever after might just come true. But when a dashing younger man with more confidence and swagger enters the scene, it looks like Brandon’s hopes are dashed. However, when Marianne throws him aside and gets her heart broken, Brandon continues to care for her as a strong and dedicated friend. In time Marianne realises that happiness doesn’t always come with excitement and the wild extravagance of youthful romance. Enduring passion and contentment often stem from the calm assurance and stability of mature love and genuine respect. “If I loved you less, I might be able to talk about it more.”

So, I’ve saved the best for last. Mr Darcy might be on all the Austen merchandise and may be the face of 18th century male feminism and handsome hunks, but he isn’t my favourite. Nope, my number one Austen man is Mr Knightley from Emma and for that he gets two quotes. To me, Knightley represents how relationships should really be. Emma and Knightley are friends for years before either of them realise they are in love. But Knightley doesn’t spend his time flattering Emma or agreeing with her every move just so he can stay on her good side. No, Knightley challenges Emma to be the best person she can be and is always by her side as a faithful friend. So, to me, that shows that a lifetime of love isn’t about kisses and cuddles all day long, it is about two people sharing a life and knowing how to be real with each other, how to be natural and how to be in love despite all the flaws and mistakes. Knightley doesn’t love Emma because of her looks, but because he feels at home in her presence. To me this relationship is not about drama or superficial hearts and flowers, no, it is about throwing all the romantic guff that fades with time out the window and realising that long term love is realistically a challenge, but is worth it when you’re with your best friend.

So I think the lesson of this Valentine’s story is that no matter whether you like Georgian classical literature and romantic novels or not, all of these Austen men have something to teach us about the essential elements of love and relationships that transcends time.