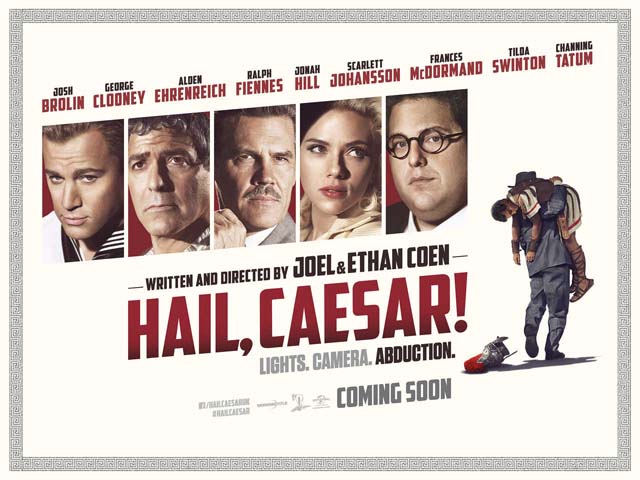 From the 17th – 28th February Glasgow will be the place to be for film fans as the Glasgow Film Festival (GFF) takes place, with 308 events taking place across the city from the IMAX to the GFT.

Proving how lucrative the festival is becoming to the British film industry, the festival is kicking off with the UK premiere of the new Coen Brothers’ film Hail, Caesar! just days after its world premiere at the world renowned Berlin Film Festival.

Not only that but the closing gala screening will see the UK premiere of yet another highly anticipated film, the Oscar nominated Anomalisa.

Aside from the huge opening and closing gala screenings there are many other events taking place over the duration of the GFF. Another UK premiere that will be taking place is that of the new supernatural horror movie The Forest as part of the FrightFest strand of the festival. Game of Thrones star Natalie Dormer will be making a red carpet appearance on 25th February.

For all the Disney fans out there, there will also be an exclusive screening of the new Disney animation Zootropolis which isn’t out on general release until 25th March.

Aside from the premieres of such big releases there will also be screenings of classic films from the years of 1976, 1986, and 1996 such as Carrie (the classic, not the crappy remake), Top Gun, and Aliens at the IMAX cinema.

However if you’re looking for what are guaranteed to be truly original and spectacular cinema experiences, there will also be screenings of classic movies in unorthodox venues. These include Raiders of the Lost Ark at the Kelvingrove Art Gallery & Museum and Baz Luhrmann’s Romeo + Juliet in the city-centre mansion house Trades Hall.

As well as hundreds of film screenings there will also be events including Q&As for film fans interested in getting more inside knowledge on the craft and the industry as a whole. Discussions will be held with everyone from stuntmen to arthouse film directors.

Other strands that form part of the GFF include the Glasgow Youth Film Festival (curated by 15-18 year olds and features the work of many first-time filmmakers) and the Glasgow Short Film Festival so there really is something for everyone in what is guaranteed to be a great week of film.

Everything Went Fine: So This Is Your Life ★★★☆☆

Cameras in the courtroom: a schadenfreude spectacle, or justice televised?

Would we care so deeply about a case if the cameras were not there?…

FOOD: McDonald's was the first American fast-food chain to open in the Soviet Union.…

MUSIC: Florence + The Machine are back with their fifth album, 'Dance Fever.'…

Agony Auncle: I feel like I’ve never orgasmed before

Many vagina owners find it hard to climax from just penetration alone.…

The award ceremony returns to the Macrobert after an online hiatus.…