Following the winter break, the Clansmen started out 2016 knowing that a win in their next three matches would confirm them as number one seeds in the playoffs. With two successive away matches that were never going to be easy, they made trips down south to face the Sheffield Hallam Warriors and the Derby Braves.

The Clansmen carried on their great form from the first half of the season and got off to a terrific start to the match. The first quarter saw the Clansmen score two touchdowns. The first of which was a fantastic 38 yard scramble from quarterback Garcia; the second was an 80 yard touchdown with Garcia finding wide receiver Lightbody, who burned his defender before receiving the catch and running it in.

The second quarter saw another two touchdowns for the Clansmen; however these scores were broken up by Sheffield’s first score of the game. The first score came from another deep pass to Lightbody, this time an 86 yard touchdown to put Stirling 21 points ahead. On their next drive, however, the Warriors responded with a touchdown of their own. After several flags and a deep catch to their wide receiver that got Sheffield onto the Stirling two yard line, a short two yard run followed by a two point conversion saw the deficit cut to 13 points. Towards the end of the half another deep pass to Lightbody, who was tackled after a 60 yard gain, set up the Clansmen in a great field position. From the 18 yard line running back Lubangu gained 16 yards on the ground to set Stirling up at the opponent’s two yard line.  Garcia converted a simple two yard pass to wide receiver Neilson for the touchdown. A fumble on the field goal meant that it was 27-8 to Stirling at halftime. 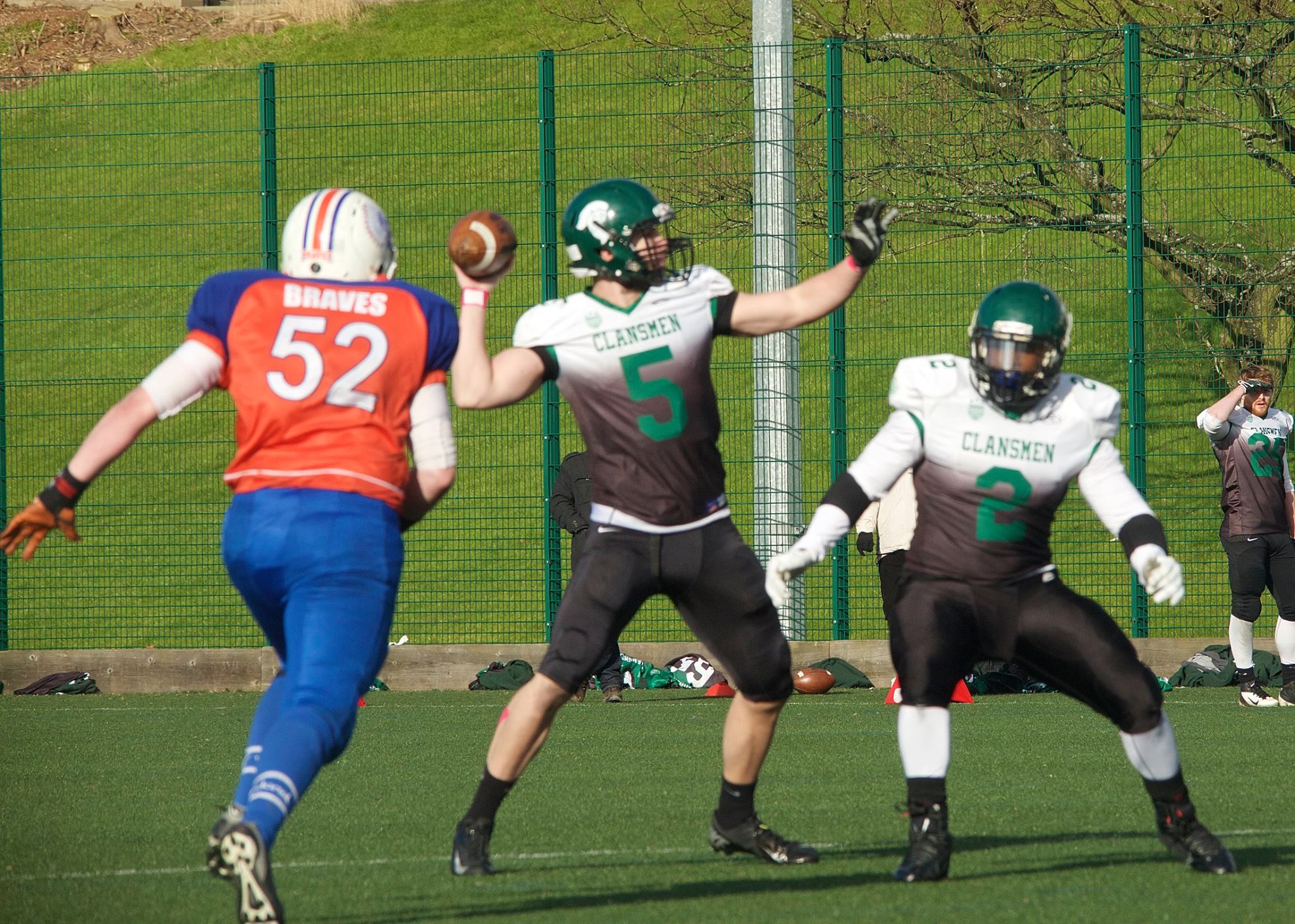 A disappointing second half resulted in only one touchdown for Stirling, and it came on the last play of the match. Before this the only talking point was a fumble recovery from Sheffield that didn’t result in any score, and an interception from cornerback Ogwuche that set up the final Stirling drive of the match. After gaining some nice rushing yards Stirling found themselves in the opposition red zone and from here Garcia through a 17-yard touchdown pass to Samuelsson on the last play of the match. As the match was already won the PAT was not attempted so the final score was 33-8.

A great first half performance from the Clansmen was slightly marred by a disappointing second half, and the team knew that if they wanted to beat the Braves in their next match they would need to up their game.

After a disappointing second half this match was expected to be a tight affair. It was anything but. From the start Stirling, on offense and defense, took the game by the scruff of the neck. Throughout the entirety of the match the defense held strong and Derby only managed to break into the Stirling half on their first drive. Despite forcing numerous fumbles and swatting down catches the Clansmen defense never managed any turnovers.

The offense was also outstanding. Derby could not find an answer to the fluid and quick paced offense and were punished for it as Stirling put up a whopping six touchdowns, the highest recorded so far this season.

In the first quarter the offense scored two touchdowns, the first coming courtesy of wide receiver Lightbody. Garcia found him in the flats and he outran all the defenders for an 80 yard touchdown. The second touchdown was scored by a quarterback run from 15 yards out by Garcia, a play after a fantastic 48 yard run from running back Campbell. This PAT was converted giving Stirling a 13-0 lead to end the first quarter.

The momentum carried on into the second quarter with more excellent play on defense. The offense’s first drive of the quarter resulted in another touchdown; another rushing touchdown from Garcia, this one ran in from 36 yards out. For the next drive the offense started in the opposition half, after the defense forced yet another three and out. The offense capitalised and scored their fourth touchdown of the match. Samuelsson received his first touchdown reception of the match, Garcia finding him with a 15 yard pass after the receiver had found space in the endzone. Atkinson converted both of these PATs meaning that going into half time the Clansmen led 27-0.

Much like the last game, Stirling had a brilliant first half, but they wanted to ensure that they didn’t drop off like in the second half of the Sheffield game. Thankfully, they got the second half off to a perfect start. From the kickoff, free safety Hopkinson returned the ball from his own 12 yard line all the way to the opposition endzone, resulting in the Clansmen’s first special teams touchdown of the year. The following drive saw another first for the Clansmen this year. A safety. When trying to punt in their own endzone the pressure forced by the Stirling defense was too much and the punter kicked the ball out the back of the third consecutive drive Stirling managed to score, this one punched in by Crowe. He received the ball at the 40 yard line from a screen play and managed to break off three tackles before scoring. This would be the last score of the game; both teams holding strong on defense for the remainder of the match, meaning a 43-0 win in favour of Stirling.

A truly remarkable performance from Stirling confirmed a 7-0 start. The offense and defense both played superb, the team’s first clean sheet of the season, and the offense looked unstoppable, with the special teams looking dangerous as well. The last regular season match is at home to a sturdy Loughborough side, and the Clansmen will be looking to complete an undefeated league season.

The beautiful sky at night