It is almost March, and that means the finer weather will be upon us and so will the tourist season. Stirling has a variety of places to visit and here are a few that will be opening in the spring, or will be having extended opening hours. Whether you’re just visiting Scotland for a semester, are entertaining family and friends, or have lived here for years, these places are the top places to visit in Stirling.

Stirling Castle is perhaps the town’s most iconic and popular tourist attraction. Situated at the top of Castle Hill and upon a dramatic crag, it holds the key to much of Scotland’s history. It is surrounded on three sides by steep cliffs, giving it a strong defensive position and dramatic history. Its strategic location, guarding what was, until the 1890s, the farthest downstream crossing of the River Forth, has made it an important fortification from the earliest times. Most of the principal buildings of the castle date from the fifteenth and sixteenth centuries, but  the oldest structure has survived since the fourteenth century. Several Scottish Kings and Queens have been crowned in Stirling Castle, including the infamous, Mary Queen of Scots in 1542. There have been at least eight sieges of Stirling Castle, many of which were during the Wars of Independence from 1296-1314, with the last being in 1746 when Bonnie Prince Charlie tried to sack the Castle. 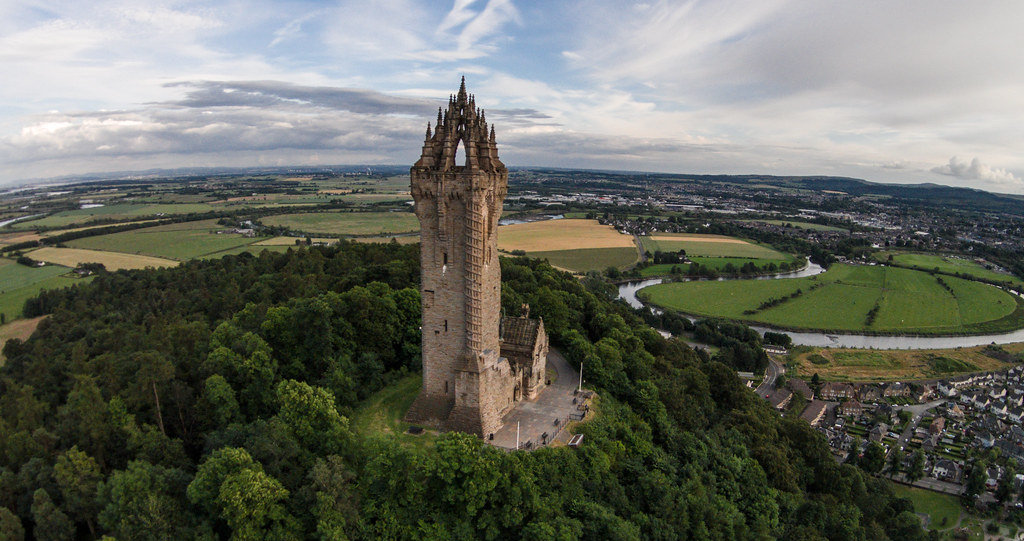 In the 19th century, there was an increased interest in the concept of Scottish national identity. William Wallace who was executed in 1305 for leading the Wars of Independence has become one of Scotland’s most famous figures and his name has been preserved through the arts over the centuries. As a result, in the 1850s the Stirling community decided to commemorate Wallace and discussed how they could best do this. Eventually, a monument was planned. So in 1861, the first stone of the tower was laid and in 1869 the 67 meter landmark was completed. The monument was made in the Victorian Gothic style and was designed by architect, John Thomas Rochead, and cost a total of £18,000, which came from public funding and international sponsorship. The tower stands on the Abbey Craig, which is a volcanic rock above Cambuskenneth Abbey, from which Wallace is believed to have watched the gathering of King Edward’s army just before the Battle of Stirling Bridge. A number of artifacts believed to have belonged to Wallace are on display inside the monument, including the Wallace Sword which is 5ft, 4 inches long and weighing three kilograms. Visitors can also climb the 247 steps to the viewing gallery which offers fantastic views of Stirling and the surrounding area.

Blair Drummond Safari Park is a zoo and safari five miles from Stirling. The zoo which opened to the public in 1970 has 120 acres of land which features drive-through reserves, a boat safari, and a safari bus that is free to visitors. Like many safari parks, Blair Drummond features deer, southern white rhinoceros, camels, African lions, ostriches, Siberian tigers, zebras, sea lions, otters, elephants, monkeys, chimpanzees and more. Argyll’s Lodging is Scotland’s most splendid and complete example of a 17th century townhouse. Situated on the hill that leads to Stirling Castle, its fine architecture marks it out as a property intended for a great nobleman serving the Royal Court. The house has many exquisite historical artifacts and architecture, including the Renaissance façade, the fireplace in the drawing room, and the recreated tapestries and elaborate chair of state. The Stirling Smith Art Gallery and Museum is an institution based in Stirling which promotes Scottish cultural and historical heritage. It holds local and national art of various styles and schools. Since opening in 1874, the gallery and museum has developed its collection and displays historical artifacts from around Stirlingshire as well as work by contemporary artists. it also opens to the public for art lectures and exhibitions of local work.

The best places to visit in Edinburgh and Glasgow