A third consecutive victory since the winter break confirmed an unbeaten regular season under new Head Coach Victor Peredo, as another comfortable win saw the side come away with a 42-3 victory at home to the Loughborough Students.

Stirling once again came out and showed why they are the reigning champions, dominating on both offense and defense. For the second consecutive week, the offense scored six touchdowns without any conceded by the defense.

The first half saw the Clansmen shoot into a 28-3 lead, despite a slow first quarter which saw only one score. The score came after a QB run from Garcia, which saw him rush 12 yards for a touchdown after a long drive from the Clansmen offence. Some good defense then saw Stirling get the ball back to start the second quarter, albeit on their own 20 yard line. After some nice rushing yards, the team found themselves on the Loughborough 18 yard line. From here, Garcia threw the ball to receiver Crowe, who found himself open after running a post route. 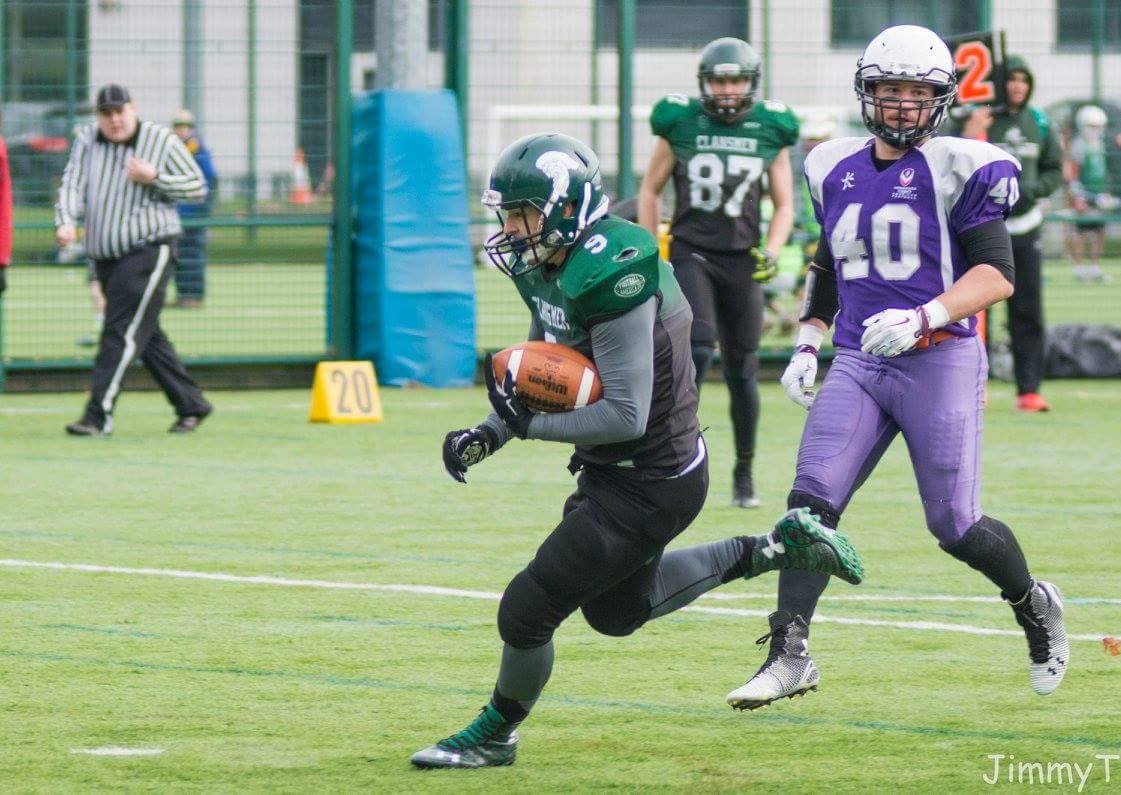 The following drive resulted in Loughborough’s first, and only, score of the game. After a decent drive, the Students found themselves in the Clansmen red zone. However, some solid defense forced Loughborough into kicking a short 12 yard field goal and getting their first points on the board. On the next drive, though, Crowe got his second touchdown. Following a fantastic kick return from free safety Hopkinson to set up Stirling’s offence in the Loughborough half, from the 26 yard line Crowe stepped in at quarterback. A wildcat play saw him fool the defense and run it into the end zone for his second touchdown of the match.

Back to back punts set up the final score of the half, which again saw the Clansmen offense start from deep in their own half, but yet again they scored a touchdown. Back to back receptions from running back Campbell set Stirling up at the Loughborough 43 yard line. A deep pass from Garcia found Crowe who caught the ball on the 5 yard line and punched in the touchdown, helped by some solid blocking from fellow receiver Lightbody. So a spectacular first half from the Clansmen saw them 25 points ahead, with the man of the half Alex Crowe, who had scored a hat-trick of touchdowns.

The second half saw the tempo of the game slow down and saw only two scores, both of which came in the third quarter and both of which were scored by the Clansmen. The first came from the first drive of the second half – Stirling starting from their own twenty yard line – saw a magnificent 45 yard run from Garcia which set up the offense on the Loughborough 38 yard line. Garcia threw a wide receiver screen to Lightbody who, after some good blocking by the offensive line, ran 35 yards after the reception to score Stirling’s fifth touchdown of the match.

The next touchdown was a special one. Veteran player on the team, kicker and receiver Greg Atkinson, who captained the side on his last regular season match for the team after four years of playing, grabbed his first score for the team. It was a one yard rushing score that was that was celebrated jubilantly by the Stirling players and supporters at the side of the pitch. He then converted his sixth PAT of the match, meaning a very good day at the office for the receiver. That was the final score of the match; however one more talking point is that Hopkinson recorded another interception for the season, which was the only turnover of the match.

This victory made it eight wins out of eight matches and topped off a fantastic and memorable season for the Clansmen that ended in the perfect way. Looking ahead to the playoffs, Stirling will need to record three more wins in order to retain their title of British National champions. They start their playoff run this Sunday, with a home match to the Bath Killer Bees.