The Clansmen hosted the Bath Killer Bees in the playoff quarter-finals, which proved to be a highly entertaining match from the start. In unseasonably warm conditions, and playing against a Killer Bees side raring for kick off, the Clansmen knew this could prove to be a difficult team to overcome.

Bath came into the match as underdogs and knew that to stand a chance they would need to perform well- and they got off to a perfect start. Receiving the ball to start the match, some well executed throws from the QB and some hard earned rushing yards from the running back saw them score the first touchdown of the match, as a short pass from the 3-yard line was well caught by the receiver. The Bees went for two points but were stopped by solid blocking, meaning that Bath were up 6-0 after the first drive.

The Clansmen offence came out equally as strong. Some impressive rushing yards gained by Campbell and Garcia and a 15 yard reception from Samuelsson set up the Clan in the red zone. On third down, Garcia did fantastically well to evade the Bath pass rush and, on the run, found veteran receiver Neilson who managed to stay in bounds to catch the ball and cut back between two defenders for a magnificent touchdown. An Atkinson PAT gave Stirling the lead by a point. The second offensive drive brought a second score for Bath, this time being held on third down by the Clansmen defence, meaning the Bees held a narrow two point lead going into the end of the first quarter. 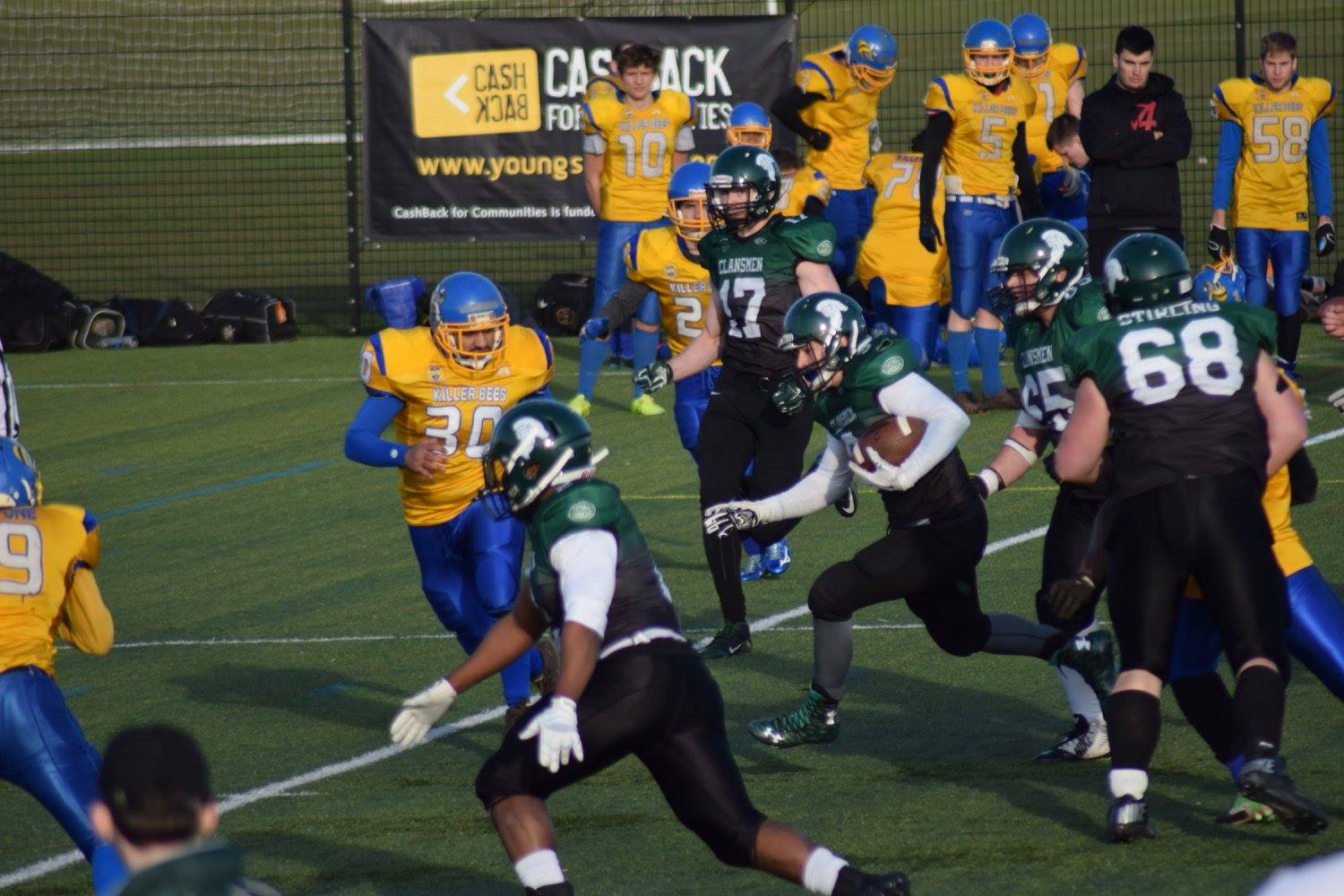 After back to back punts from each team, Stirling started with the ball deep in the Bath half.  A lot of back spin on the Bath punt led to the ball landing at their own 30-yard line. The Clansmen offence soon made them pay, as Crowe scored from a jet sweep from the six-yard line for his first touchdown of the day. A wise decision from Garcia to run the ball on the PAT gave Stirling two points, making the score 15-9 in favour of the boys in green. This score gave the Clan all the momentum they needed and a fantastic special team effort stopped Bath’s kick return within ten yards of their own end zone. This time the Clansmen defence scored. A tackle for a loss on the running back pinned Bath to the three yard line. Kovacs, Mustapha and McColl then swarmed the Killer Bee’s QB and scored a safety, getting Stirling another two points on the board.

The Clansmen’s momentum didn’t stop here as they put up another two touchdowns before the half, both scored by high flying Alex Crowe. The first was another rushing score, this time from the 4 yard line. The second, following soon after, was a well caught nine yard reception which extended Stirling’s lead to 31-9. Bath then put together some nice yards and very quickly scored a touchdown. After some big gains in the air and two long scrambles by the QB, a pass from the Stirling 17 yard line was caught for a Killer Bees touchdown. The PAT was fumbled, meaning at halftime the Clansmen led 31-15. 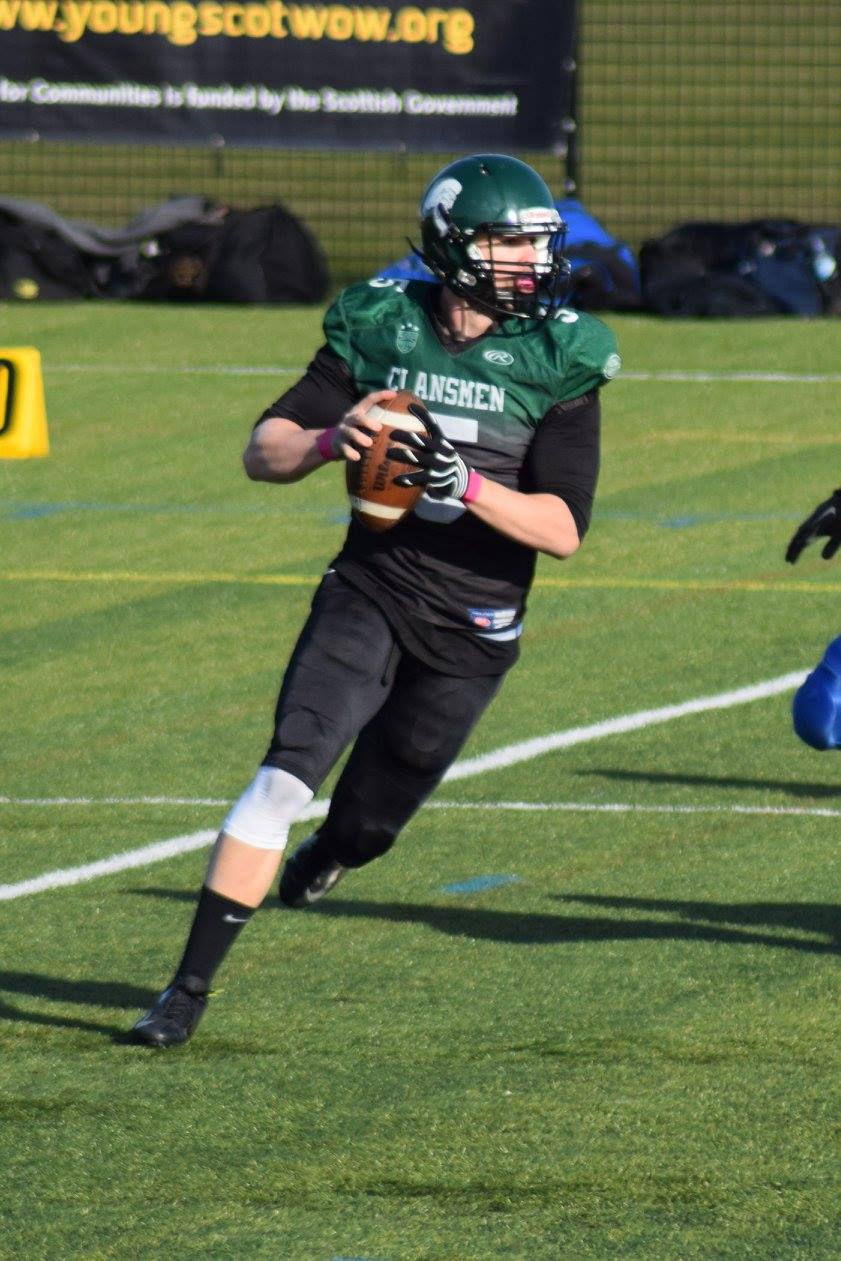 Another tremendous play on special teams was the sting in the tail for the Killer Bees. From his own 10 yard line, recruited receiver Penny returned the opening kickoff of the second half for a touchdown for the special team’s second score of the season. This was due to some great blocking from teammates and great vision from Penny to find the space between the gaps in the Bath kicking team. After Atkinson converted his fifth PAT of the day, Stirling were ahead by 23 points.

The next drive then saw Bath’s final score of the game. After some nice receptions from the wide receivers and some more solid rushing yards, the Bees found themselves on the Clansmen one-yard line. Then, after three flags on the defence, Bath finally scored after the QB threw to a receiver who was on a slant route. The PAT was fumbled, meaning Stirling led by 38-21.

The Clansmen responded by scoring two more touchdowns before the end of the quarter. The first was scored by Samuelsson who caught the ball on a post route, thrown from the five yard line, before another rushing touchdown saw yet another score for Crowe to record  the team’s season high of four touchdowns in one match. 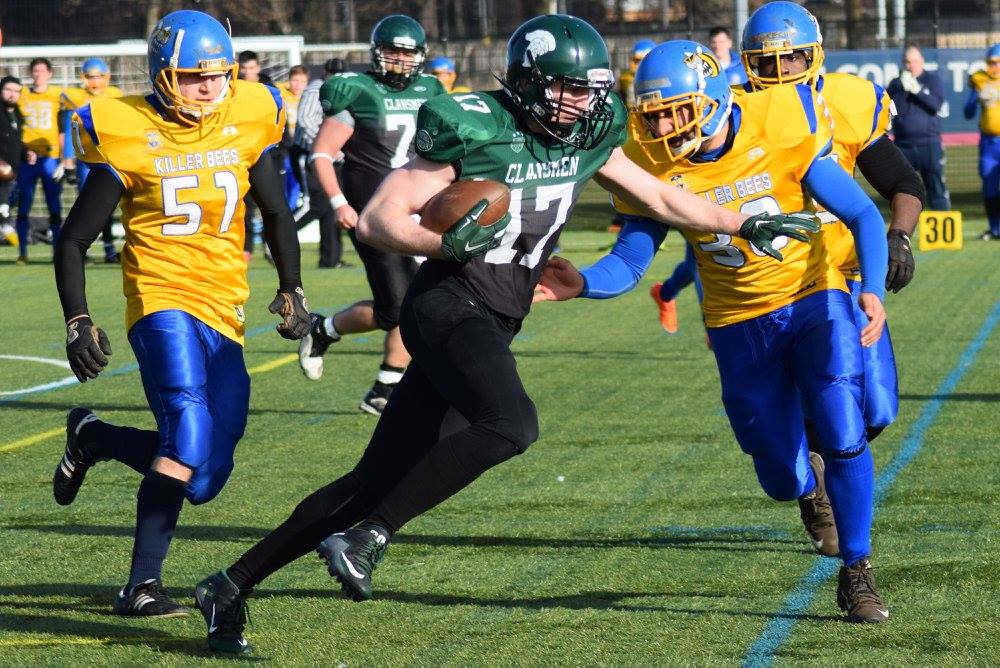 The final quarter saw the least action of the match; however it did contain one final touchdown for the Clansmen. Again taking advantage of their versatility, the offence gained both great rushing yards and passing yards on the drive down the field. A quarterback run from Garcia from the 12 yard line saw Stirling score their eighth and final touchdown of the match. Atkinson converted meaning that “Greg the Leg” went for a perfect 8 out of 8 on PATs and helped the Clansmen to a very convincing 59-21 victory over the Bath Killer Bees.

A great performance again from all areas of the team, with seven scores for offence and one score for both defence and special teams. The offensive line deserves great credit for helping create four rushing touchdowns and putting up effective blocks for the three passing touchdowns. However, for the second week in a row the man of the match has to go to Alex Crowe who had an incredible game, scoring four touchdowns.