For their playoff semi-final the Clansmen hosted the Hertfordshire Hurricanes in a repeat of last year’s national final. However, this match was played at Stirling on a pitch on which Clansmen have never been beaten, so this would be a very tricky match for the Hurricanes.

With every game since the turn of the year the Clansmen just seem to be getting better and better. This match was no different. After a defensive stop on the first drive of the match the Stirling offence started with the ball just inside their own half. After some good gains were called back due to flags, Garcia took a shot down the field from the 45 yard line to wide receiver Neilson on a post route, who caught the ball and ran it in for the first touchdown of the game. A converted PAT made the score 7-0.

A second defensive stand led to a punt from the Hurricanes on consecutive offensive drives; however, this punt started the Clansmen on their own 9-yard line. After some nice running gains from Campbell and Crowe, the Hurricanes forced a fumble and recovered the ball in midfield. After gaining some good yards from running the ball, Hertfordshire attempted a field goal which was snapped too early and bounced off the helmet of the kick holder. The fumble was recovered by Stirling, again starting the offence deep in their own territory. This time a massive 50-yard gain from a pass caught by Lightbody saw the Clansmen inside the opposition red zone. The clock then ran down, meaning the start of the second quarter, and on the third play Stirling doubled their lead, after a short six yard QB run by Garcia was scored. At the start of the second quarter, the score was 14-0 to Stirling. 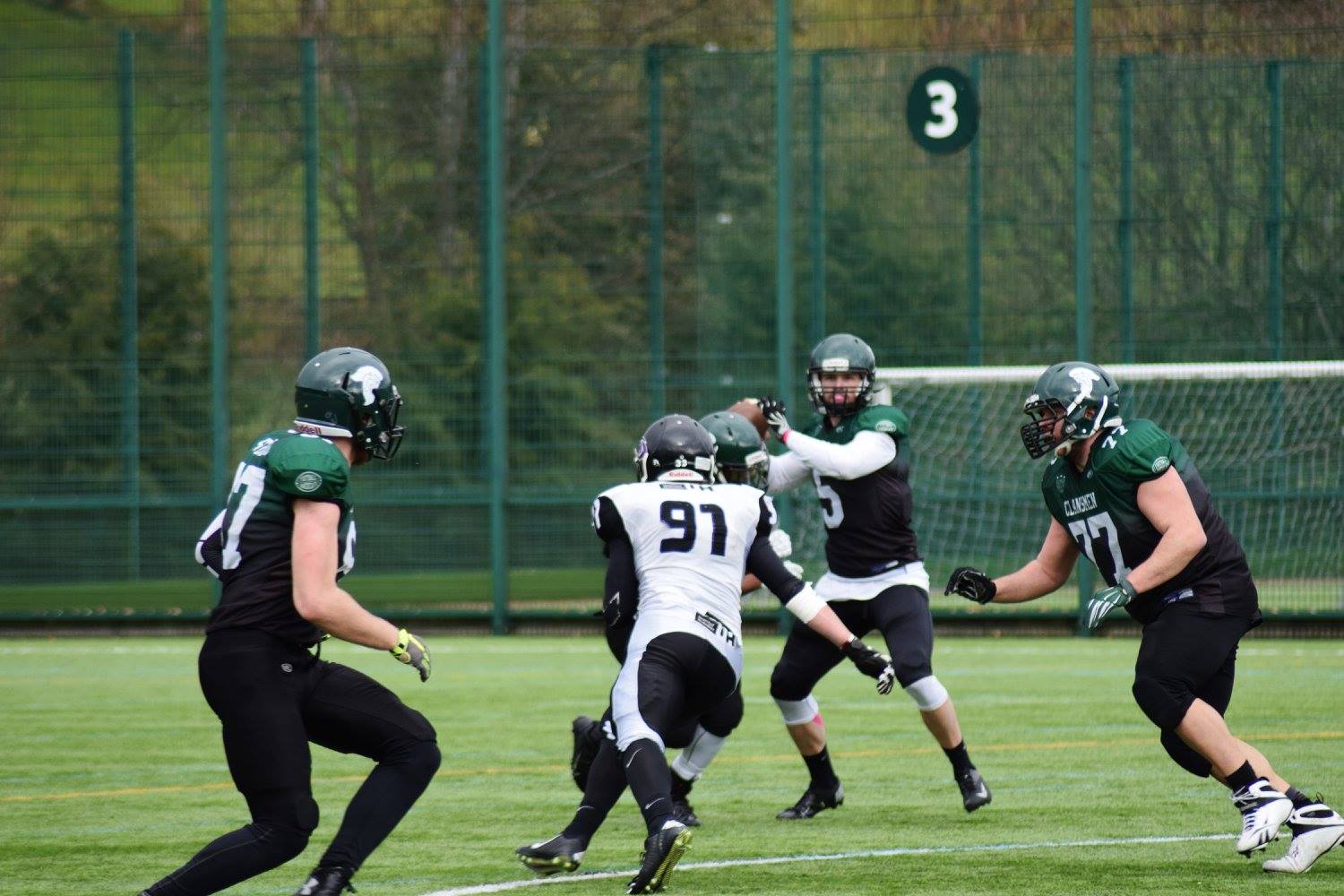 Hertfordshire then responded to get their first score of the match. Some great plays from the Hurricanes’ running back, a solid gain from a screen play and some good rushing yards, set up the away side on the Stirling five-yard line. The QB threw to a wide receiver, who ran a corner route and caught the ball with both feet in bounds at the back of the end zone. The PAT was converted meaning the score was 14-7.

Stirling then started to dominate proceedings, however, putting up two more touchdowns before halftime. The first touchdown was set up by yet another deep reception from Lightbody, who burned his receiver and caught the ball for a 38 yard gain. From the 20-yard line, Crowe stepped in at QB and, after two rushing plays, the team scored their third touchdown of the day. This one was a three yard run from Crowe that was created by some efficient blocking by the offensive line and receivers.

The following kick off saw some excellent work from the special teams that managed to stop Hertfordshire on their own one-yard line. Three plays later, a fumble forced by Samuelsson and recovered by Hopkinson set up the Clansmen in fantastic field position. Another short QB run, Garcia’s second touchdown of the game, put Stirling up 28-7 at half time.

The start of the second half saw Stirling receive the ball. After a well put together drive, making it to the Hertfordshire 25 yard line, a fantastic interception from a Hurricane linebacker kept the Hertfordshire hopes alive. This drive led to another field goal attempt. However, there was not enough distance on the kick, so Hopkinson caught the ball and ran it back to the Clansmen 30-yard line where the offence again took over. After some rushing yards were stopped by the Hurricanes, from two yards inside the Clansmen half Garcia threw a deep pass to Crowe who caught it after freeing himself from his defender and punched in his second touchdown of the day, taking his record to six touchdowns in the two playoff matches so far. This gave Stirling a 35-7 lead heading into the final quarter, meaning the team was only 12 minutes away from a third consecutive national final. 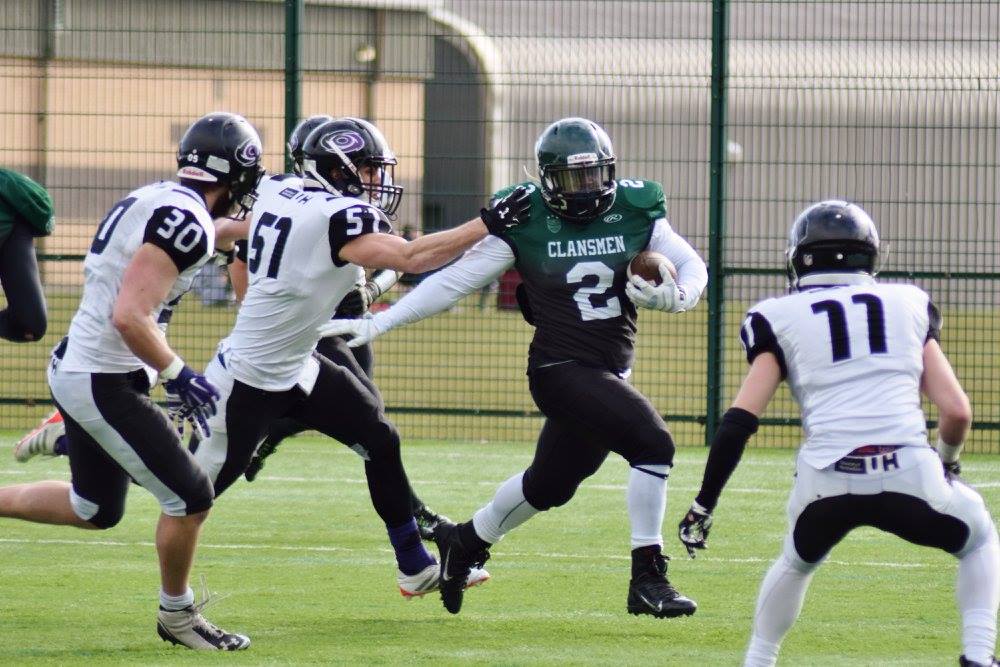 The first drive of the fourth quarter resulted in Hertfordshire’s second, and final, score of the match. This time the QB found his wide receiver after a short two yard pass that was caught inside the end zone, running a shallow slant. Then, a fake PAT was well snuffed out by the Stirling special team which left the score at 35-13 with only ten minutes left on the clock. After a punt from the Clansmen, the Hertfordshire offence again found themselves in field goal range. For the third time this match they failed to convert, as they tried a fake which again was read by the Stirling defense. The final score of the match was a deserving touchdown from receiver Lightbody. Garcia found him in the flats, received on the Clansmen 28 yard line, and he broke through three tackles and outran the defence for Stirling’s sixth and final touchdown of the match. Another perfect kicking day from Atkinson meant the final score was 42-13 in favour of the boys in green, sending the side through to the final.

The MVP for the match was Andrea Pasquali, who dominated the line on both sides of the ball and also performed fantastically on special teams.

Another emphatic victory, meaning the Clansmen have scored at least five touchdowns in every match they have played so far in 2016. The team is flying high and are raring to go in what should be a fantastic final against fellow undefeated side the Birmingham Lions in Leeds on March 20th. A wonderful season for the team so far will hopefully be topped off with a third consecutive British Championship, which would be a BUCS American Football record.