Lauren Marriott, the Union’s Vice President Communities, has revealed her personal disappointment at the University’s decision to delay a serious re-evaluation of graduation costs – which she called “a smack in the face” for students – until the next academic year.

Students graduating this year will be asked to pay £50 for their degree certificate – irrespective of whether or not they attend their graduation ceremony – and £48 for compulsory ceremonial robes if they do choose to attend.

Marriott told Brig she had taken detailed research from a survey of Stirling students on graduation costs to a meeting with the Academic Registrar last Semester, and had left the meeting “feeling really hopeful” that some progress would be made, particularly on the £50 fee for non-attendees.

After waiting months for a decision, Marriott was informed on 24 February that the Academic Registrar would not be looking into revising graduation costs until the academic year 2016/17.

“For me, that’s not good enough,” said Marriott.

Marriott responded to the Registrar via email:

I must confess that as I have been working on this all year, I am disappointed with the proposed timescales given that this was discussed last semester when we looked over the survey outcomes.

I feel that even some small step should be taken to satisfy the student want for a fairer graduation price. For me, even those that cannot attend this year, not being charged £50 would be an amazing achievement. As tickets do not go on sale until 20th April, I feel that this is still something the university can achieve in this time scale. I feel like this has a really big impact on accessibility and student experience.

Every year, once Graduation invitations go out, social media is a flood with discontent at the costs associated with the ceremony. This is a pledge I ran on for my second year as a sabbatical officer, and I would feel like I had really let students down if nothing could be changed to better the situation this year.

Weeks later, she has still not received a response.

The survey of over 200 Stirling students and graduates that Marriott carried out revealed nearly three-quarters felt obliged to attend their graduation ceremony to make it “special”, and that 81% felt the same way about purchasing robes.

The survey also revealed that crushing majorities of students and graduates felt that current graduation costs were unfair. 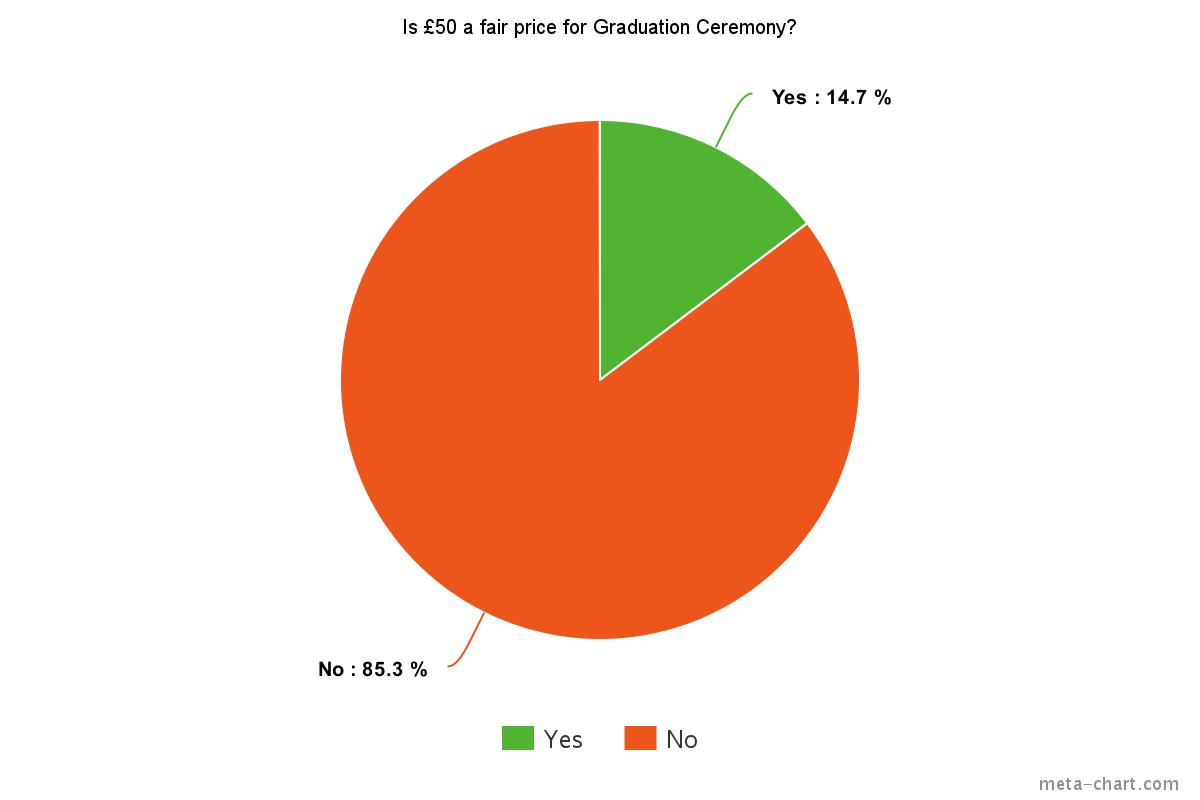 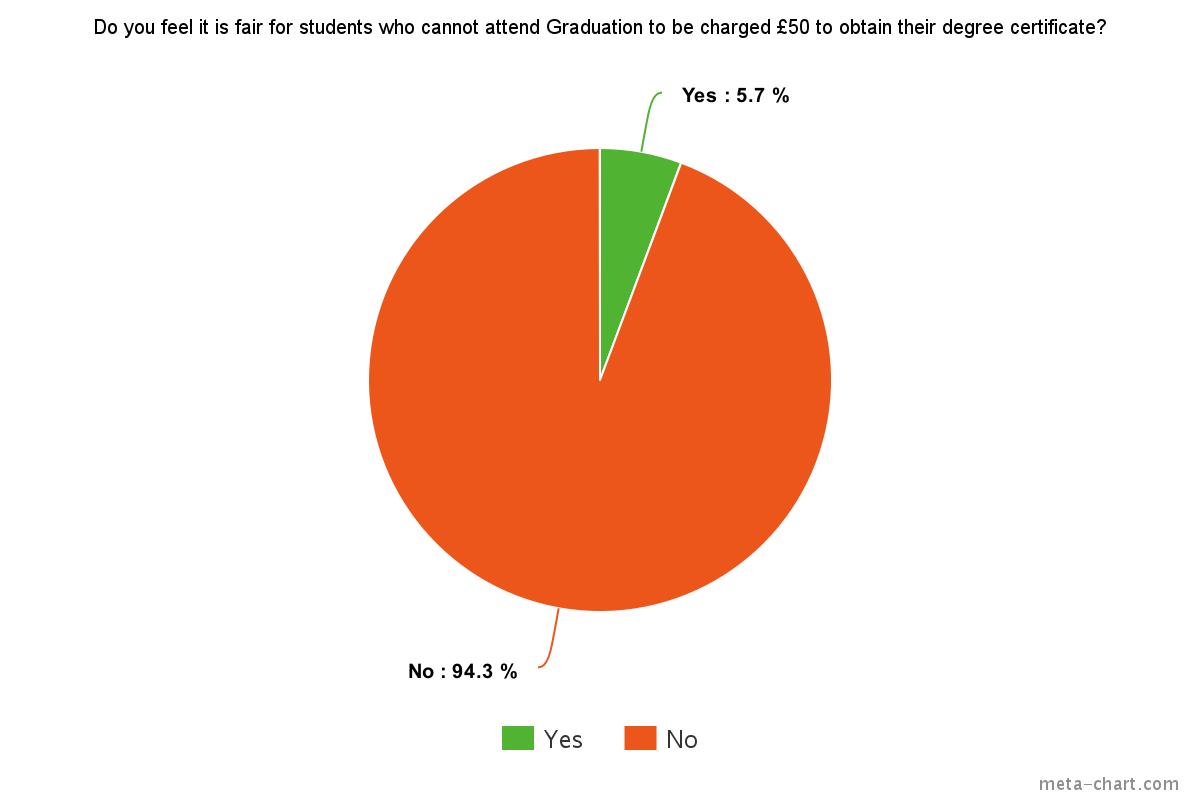 The situation is, you get an e-mail on the 20th April and it’s all very exciting –

“‘Congratulations, you’re going to graduate! We would like to invite you to attend your Graduation Ceremony, but that’ll be £50 for the privilege please, and we want another £48 from you to pay for the robes that you have to wear, and you’re probably going to need to wear something nice so you’ll probably have to buy a new outfit, and you’ll probably want to take your parents out for dinner as well to say thank you so that’s just some more money – oh but don’t worry, if you don’t want to come don’t worry about it, we’ll just take £50 for the certificate.’

“That is not OK.” – Lauren Marriott

Marriott also highlighted that graduates only receive 2 tickets for their ceremony, and that any extra cost another £12 each, and that students wishing to attend their Graduation Ball need to fork out another £60.

She also mocked the cost of degree certificates. “I can print off a nice shiny certificate for 59p at Mail Boxes… I want to know where those £50 fees are going, and if the University makes a profit.”

Marriott has been collecting student responses to graduation costs to take to Uni management in a bid to make them reconsider.

“I’m always told as a sabbatical officer to pick my battles,” said Marriott. “This is one that I’m not willing to back down on. I’m very concerned that because I’m leaving, this is just going to get brushed under the carpet.”

But a candidate to be next year’s Union President, Alex Frost, has also poured scorn on graduation costs, calling them “an insult to those that have put in the maximum amount of effort possible into getting their degree.”

Personally, I’m angry knowing that the university is charging £50 for merely attending the ceremony (in a bloody sports hall), after tuition fees alone have put me in £28,000 worth of debt…

“With the amount of money coming in from 8,200+ undergrads and 3,400+ postgrads, I cant help but feel that the graduation fee is taking the piss.”

Other students were similarly outraged at the price of graduation. Ismay Hutton, a final-year Film and Media student, posted on Facebook:

I’ve worked hard for four years, and in the end it can literally all be for nothing if I don’t fork out over £50? It’s genuinely insulting.”

Naomi Leigh Anderson, an 18 year-old History and Law student, told Brig that having to pay £50 for “that vital piece of paper” was “an outrage”. As for graduation robes, Anderson had an idea:

“I believe that for robes it should be a deposit of, say, £20, that you put down when you receive the robes but get back once you return them.”

Get Ready for Sprimmer with River Island