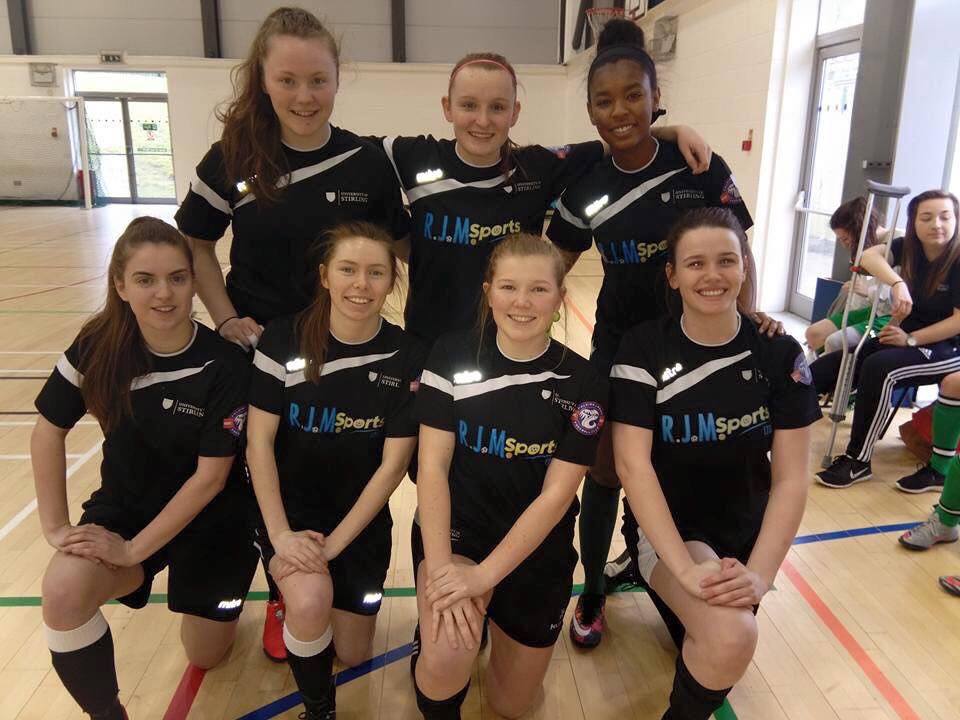 In a truly remarkable outcome, after only three years at this university the sport of Futsal now has two national title winning teams from Stirling. In a follow up to their male counterparts, Stirling women’s futsal won the Scottish Universities Championship earlier this year in Livingston. This means that they progressed to the BUCs last 16 which they played in yesterday.

The side was only established in October 2015 by footballers who wanted to try out the indoor version of their sport. Since then they have gone from strength to strength to the point where they could establish a 2nd team.

The championship consistent of two round robin tournaments, where the Stirling 1st and 2nd teams played against Edinburgh University’s 1st and 2nd teams. With a large pool of raw talent, the women’s side benefitted from the experience of futsal coach Francisco De Sa Fardilha which prepared them for the first round. Although even with raw talent the fundamental skills showed as Stirling 1st won all three games by a total of 21 goals to 3.

For the second round the team was without the extra experience, but they made up for it in grit and determination. Besides the difficulties of selecting and separating 1st and 2nd teams while maintaining collective morale, the team had to source extra kit which is usually done during the summer months. However, whatever difficulties existed in the run up to the event clearly did not hurt their performance. The Stirling 1st were again on top form as they won by a collective score of 18 goal to 3, with a 9-0 drubbing of Edinburgh 2nd the pick of the performances.

If the Scottish league did not provide sufficient competition, then the team have beaten their sceptics in the British championships with wins over York 2nd and Manchester 1st. Yesterday afternoon Stirling confirmed their place in the BUCs quarter finals with a 5-0 victory against Northumbria University 3rd.

Team captain Rebecca Blair has stated that the ultimate aim is to win the British championship. So with the men’s and women’s sides making strides this season, this reporter thinks it is fair to say that Brig will be hearing much more from Stirling Futsal

Be the Belle of the Ball with Quiz

Get Ready for Sprimmer with River Island