Amendments designed to rein in the “astronomical pay packets” of university principals were either blocked or voted down last week as the Scottish Parliament voted through a nonetheless groundbreaking higher education bill.

The Higher Education Governance Bill passed in Holyrood by 92 votes to 17, but had proved controversial with university managements around the country due to proposals to introduce elected chairs onto the governing bodies of all Scottish universities.

Alison Johnstone, Green Lothians MSP, attempted to table an amendment that would have legally required remuneration committees – who set the wages of university principals – to consider the pay ratio between the highest and the lowest-paid staff at their institution.

Figures released last month by the Union of Colleges and Universities (UCU) showed that Stirling’s Principal and Vice-Chancellor, Gerry McCormac, had the second highest pay ratio between his salary and the average salary of his staff in Scotland. 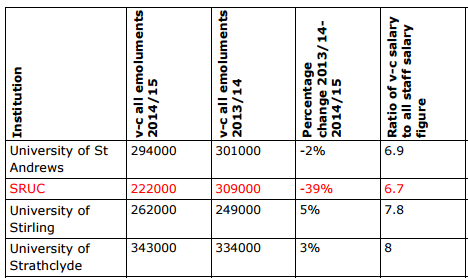 Johnstone’s amendment was blocked from the final vote on the grounds that, according to Education Minister Angela Constance, it was “outwith the legislative competence” of the Scottish Parliament, adding:

“It is not for the Scottish ministers to intervene statutorily in how pay and conditions are set by autonomous bodies.”

A further amendment, put forward by Labour MSP Mark Griffin, to bring staff and student reps onto remuneration committees, was voted down 80 votes to 30.

While university lecturers are being pushed into zero hour contracts and services staff are kept on poverty pay, Scotland’s university management are reaping astronomical pay packets out of the publicly funded institutions they run. This is not right and it’s not fair, and it’s time we do something about it.

“University principals have the highest pay ratio in the entire public sector and this ratio in Scotland is even higher than the UK average. After years of pay restraint in the public sector, people find these vast levels of wage inequality harder and harder to stomach. You don’t have to be a mathematics graduate to understand that a 15% pay increase for someone on a salary of hundreds of thousands of pounds if worth a lot more than the same increase for someone on an average wage.”

This overall remuneration and pay increase was actually quite modest compared to some, with Strathclyde’s Jim McDonald netting £343,000 a year, while the University of Dundee’s Principal, Peter Downes, received a 13% pay rise.

As in previous years, the University of Stirling said McCormac’s pay increase would be donated to the Vice-Chancellor’s fund, which was put in place to provide financial support to student groups and projects, and of which this newspaper has been a beneficiary.

A University spokesperson told Brig: “For the last three years the Principal has donated all pay award increases to the Vice-Chancellor’s Fund, which supports projects to enhance and enrich the student experience.”

However, the minutes for the remuneration committee meeting which decided this pay increase were redacted, according to the UCU report, despite the previous year’s minutes having been released in full.

The UCU said that as a result, the setting of principal pay at Stirling had become “less transparent.”

The University did not answer our query on why these minutes were redacted, instead sending us a quote defending McCormac’s travel and hotel expenses, which we did not ask about.