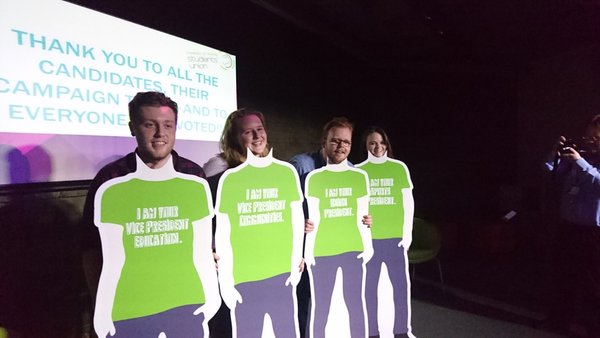 Dave Keenan has sent a message to Stirling University students after he was elected Union President on Tuesday night, saying: “I will fight for you”.

Keenan won all 3 rounds of voting, coming up with a 50% margin in the final round, in front of a packed out Venue.

Jess Morris was re-elected Sports Union President with almost twice as many votes as her fellow candidate Steven Watson.

In the other races, Jess Logan was elected VP Communities, taking over from the ever popular Lauren Marriot. Matt Adie was also elected VP Education, in one of the closest fought contests of the night.

Keenan himself said that the following day, he would be e-mailing the Senior Management Team and introducing himself.

Sports President Jess Morris, obviously on an emotional high, struggled to get her words out while talking to Brig, eventually managing to say “I’m so proud of all of the people on my team. They have worked so hard”.

Blue is the colour of Winter