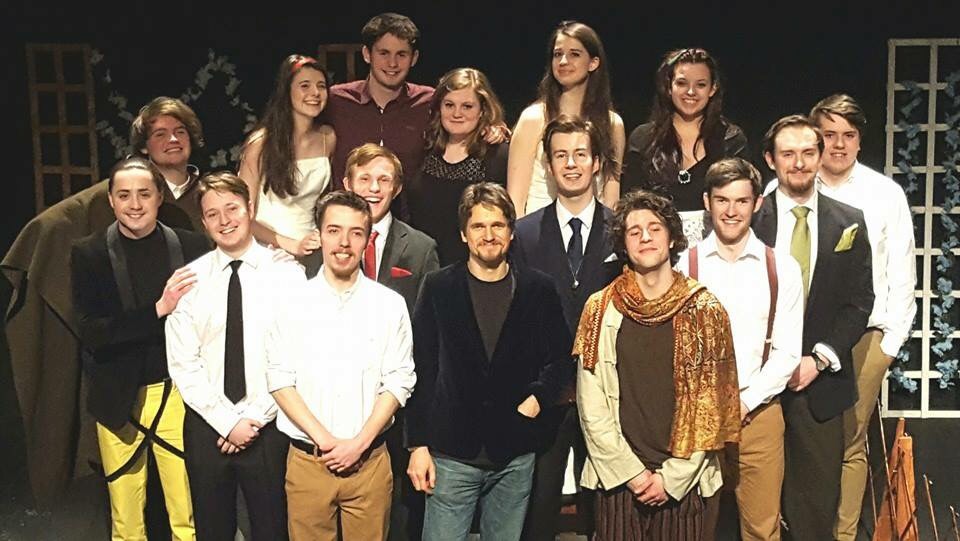 And may I say, as someone who had no previous knowledge of the play, it was incredible and frankly hilarious.

For those who do not know the plot, bear with me as I attempt to explain. There is a great deal going on in the story with an array of rather confused and conflicting characters, all seeking unrequited love and pretending to be something, or more, someone they aren’t.

In the wrong hands, this complex piece of theatre could have become messy and confused at the best of times. However through the careful skill of Director, Chrissie MacDonald, and Producer, Kieran Skelton, the talented cast portrayed each character and scene in such depth and made the audience believe in them with what seemed like little effort.

Every single actor did a fantastic job, but for me the night was stolen by Christopher  Campbell who portrayed Malvolio. Every word that came out of his mouth and every movement he made seemed to contain so much of the character, filled with the emotion and attitude required for such a role.

At early points in the play, when Malvolio’s life hadn’t yet started falling apart, he held himself and spoke with such snootiness and it made him so fantastically detestable, that the audience was all the more happy to see him burn as the subplot developed.

However, when Campbell’s character was trying to win over Olivia after reading a fake letter from her declaring her love for him, that scene was one of my favourites. Dressed in suspender braces and bright yellow trousers, Campbell made the audience roar with his hilarious movement and tone in this declaration of affection.

Calum Swan, James Craig and Megan Milne, (portraying Sir Toby Belch, Sir Andrew Aguecheek and Maria), as a triple act, also stood out as key in forming this shows’ comical appeal. The drunken exchanges between Swan and Craig seemed effortless as they bounced off one another and kept the audience out of breath with laughter.

This was then added to by Milne’s attitude towards the two of them and their drunken antics. Her whole persona was entirely convincing and despite Milne being very emotional about her final show, this never once interfered with her on-point portrayal of the character. Another one of the images sticking in my mind was Milne’s excessive banana eating with more attitude than I’ve ever see someone consume food.

I could write another thousands words in this article and not come close to describing the performance of George Gilman in this show; so I’m going to keep this relatively short. His take on the local fool, Feste, was the heart, brain, face and legs of the plot. With guitar in hand, Gilman was there narrating yet participating in this story. Encountering almost every character in isolation, Gilman had an easy rapport with each of them. He could simply walk into a scene and suddenly it was his to dance around with, make fun of, or on some occasions, simply lie down and sing with. He skilfully bridged the gap between song, dialogue and monologue.

The performance given by members of SUDS in their first year was exceptional. Kirstie  Will playing the part of Olivia was without fault. She was Olivia and Olivia was her. Her mannerisms throughout the play was extremely impressive. With hands placed on top of one another, back straight and chin up, she was in all accounts “a proper lady”.

This was only seen to disappear in the very deliberate fashion of Olivia’s romantic pursuit of Cesario (or a disguised Viola, portrayed by Tessa Richards. The two worked so well together in the high energy cat and mouse chase around the stage.

Having mentioned Tessa Richards, let’s talk about her performance. Being a woman playing a woman who is herself playing a man, seems like such an undertaking, having to act upon her acting. But Richards pulled it off. Whether it only be lowering her voice only to let it jump up a certain moment. The performance was admirable in the complete believability of the character’s struggle in dealing with the masculine and feminine side of herself.

Cameron Watson and Andrew Hart also made for a great duo. First being removed from the main storyline, we saw the two work well together in putting across their sense of brotherhood; the performances let the audience feel the connection between the two.

The way Ed Whitaker assumed the role of one of Orsino’s servants was hilarious. The slow, shaky nature in which Whitaker carried out every was a constant and sustainable joke.

Calum Moore, (Director of SUDS’ previous production, August: Osage County) played a confident Fabian and was the only character who referenced the fourth wall.

Michael Mullen played several roles within the play and put his very personal stamp on each of them. With his expressions drawing more attention and laughter than the dialogue surrounding them.

Jonathan Wilson also portrayed several roles, the ship’s captain standing out as the best as he comforted Olivia and hatched her plan to disguise herself as a man.

The stage design was additionally excellent. With the two gardens of the two households indicated only by plants and small fences. It is a shame the society had such a small space to work with as sometimes I feel like their movement was restricted greatly by the fence that divided the stage in two. Some of the livelier scenes would have really benefited from a bigger stage and less of an obvious divide between spaces. However, the society worked with what they had and used the space as best they could to create the Illyrian gardens and streets.

Overall, I left completely blown away by yet another incredible production by SUDS. Each of the cast put their all into their character and looked like they were having so much fun while doing it. A huge congratulations to everyone involved and especially to Chrissie MacDonald and Kieran Skelton for a Shakespeare production which could match the professionals. I will without doubt, I will always have good memories about Twelfth Night.

Am I a good student or a bad one?