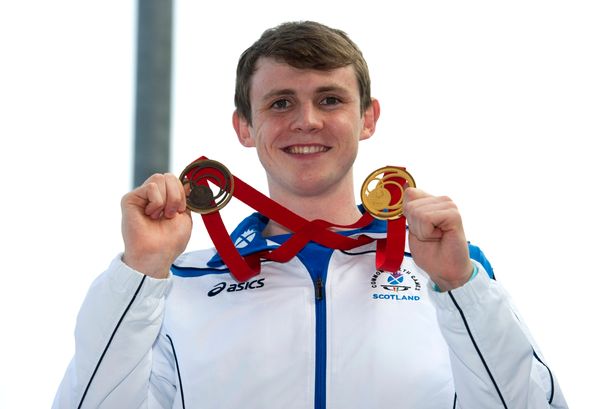 In his four years at the University of Stirling, swimmer Ross Murdoch has won a gold medal at the 2014 Commonwealth Games in Glasgow, and a bronze medal at the World Championships last year. With his sights now set on Olympic glory Brig sports editor interviews Murdoch about sacrifices, triumph and his hopes for the future.

First of all what does it feel like to be chosen for the final British Olympic squad?

To be chosen for the squad is a great honour for me. Only a handful of sports men and women get the opportunity. I’m absolutely delighted. I’m committed to doing everything possible to make my club and country proud.

You began swimming at the age of six. At what point did you commit to competing at such a high standard?

I started going to the pool when I was four. It was supposed to help me cope with hyperactivity.I began going regularly at the age of six and after two years I finally joined a competitive club. Throughout school I tried to focus primarily on excelling at academics, so swimming became my second priority. I had always intended to return to a high level of competitive swimming after finishing school, but my education at least provides me with a Plan B. After school I attended college for a year where I really began to increase my standard of training: swimming 6 times per week, with 3 gym sessions on top.

How much have you sacrificed since you began serious training to make it to a world class level?

The main sacrifice during this period was the loss of regular contact with friends from my school days. In 2012, when I came to Stirling University, I had to sacrifice a great deal of quality of life. The financial demands of supporting myself away from home meant that I had to work as a coach despite attending training 10 times a week and keeping up my academic studies-despite the best efforts of my family. Fortunately, I obtained funding from British Swimming and the Winning Students scholarship programme which helped my concentrate on my qualification for the 2013 World Championships.

What has been your favourite experience in your competitive swimming career so far?

The most memorable experience has to be walking around the pool on the day of the Commonwealth 200m breaststroke final. It was July 24th, my grandfather’s birthday, and my whole family was in the stands. It was so rewarding to see the great joy which winning that final race brought to my family and to thousands of Scots in the stadium. It was my way of giving back to my family for all the support they have given me.

What impact has the University of Stirling swimming programme had on your progress over the last four years?

Besides the funding that they have provided, the impact of Stirling swimming programme has been tremendous. The quality of the personnel is second to none in the whole country. Although we have fewer swimmers than Bath, Stirling has trained four boys who have made it onto the squad for the upcoming Olympics. For Scottish swimming specifically, Stirling is a key institute in the development of talent here. Half of the Scots of the Olympic swimming squad are from Stirling. My coaches are Ben Higson and Steven Tigg. They run the whole swimming programme, and their hard work is reflected in the standards which this programme has produced.

Do you have any thoughts for your career after the Olympic Games?

Well my intention is to train through another four year Olympic cycle to Tokyo in 2020 and also make it to the 2018 Commonwealth Games and the World Championships in between.Just keep the ball rolling. I will keep studying because my education will be the key to my long term future. I have no solid plans for a future job. Perhaps I’ll become a PE teacher or join the police force. Something with real responsibility towards others.

Squash and the Olympics: Will the racquet sport ever be on the world’s biggest stage?