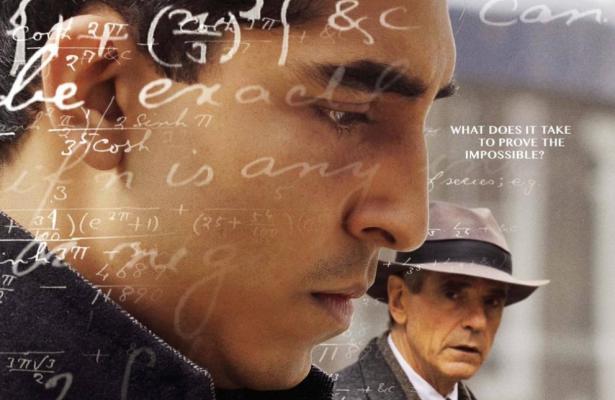 This British film explores the life of one of the world’s most revered mathematicians, Srinivasa Ramanujan Iyengar (Dev Patel).

Growing up in impoverished Madras, India, Ramanujan has a natural fascination and innate, yet wildly unique understanding of maths. But not just any maths; undiscovered and unchartered maths.

Frustrated by his deprived background and inability to develop his findings, Ramanujan sends his unpublished jottings to a series of prominent persons and schools. Eventually his works turn up on the desk of none other than G.H Hardy (Jeremy Irons) who is one of Cambridge’s most revered mathematical minds.

Mesmerised and intrigued by this unknown Indian man’s assertions, he invites him to Cambridge to study and publish his works. For someone who has never left Madras, the long and lonely voyage across the sea to Britain in the early 20th century is not only an adventure but an insight into a frightening new existence.

Once in England, Ramanujan struggles constantly to understand England and retain his own identity. For one, he is in a new place with new sites, customs and a culture he has never seen before. The first time he sees snow is remarkable and rather touching. But not only is Britain a strange and fresh force to recon with; his education offers challenges and confusions of its own. For a man who has never gone beyond a basic education, the gruelling and rigid regime of Cambridge plays with his mind and conflicts with his natural ability to understand mathematics.

After years of struggling to prove himself amongst a prejudice elite society, living through the Great, being separated from his mother and wife and dealing with racist abuses, he finally gets his work published.

But even although Ramanujan is a young man on the brink of many discoveries, he develops a serious illness and his life is in danger. While pushing himself in a desperate bid to leave a legacy, his health rapidly deteriorates and he is forced to abandon his studies. But before he does, Cambridge makes him a Fellow, and his contributions to mathematics is forever recognised despite the obstacles of his race and poverty in a time of intellectual and social exclusiveness.

Overall, the film was phenomenal and had the beautiful class and sophistication that British cinema creates. It was wonderful to see the life story of such an extraordinary man who has contributed to: mathematical analysis, number theory, infinite series and continued fractions to such an extent that his methods are still used today to decipher evolving scientific discoveries.

The cast were first-rate, with Dev Patel standing out per usual as a highly versatile and worthy actor. The classical British cast of Jeremy Irons, Toby Jones, Jeremy Northam and Anthony Calf, allowed the eloquence of the story and its themes to be delivered with extraordinary care.

It wasn’t a loud film with over dramatised and cheapened scenes. It was tasteful and elegant. The strength of the content was allowed to flow seamlessly through well-shaped scripting, directing and acting and dealt with a powerful story in a clever way.