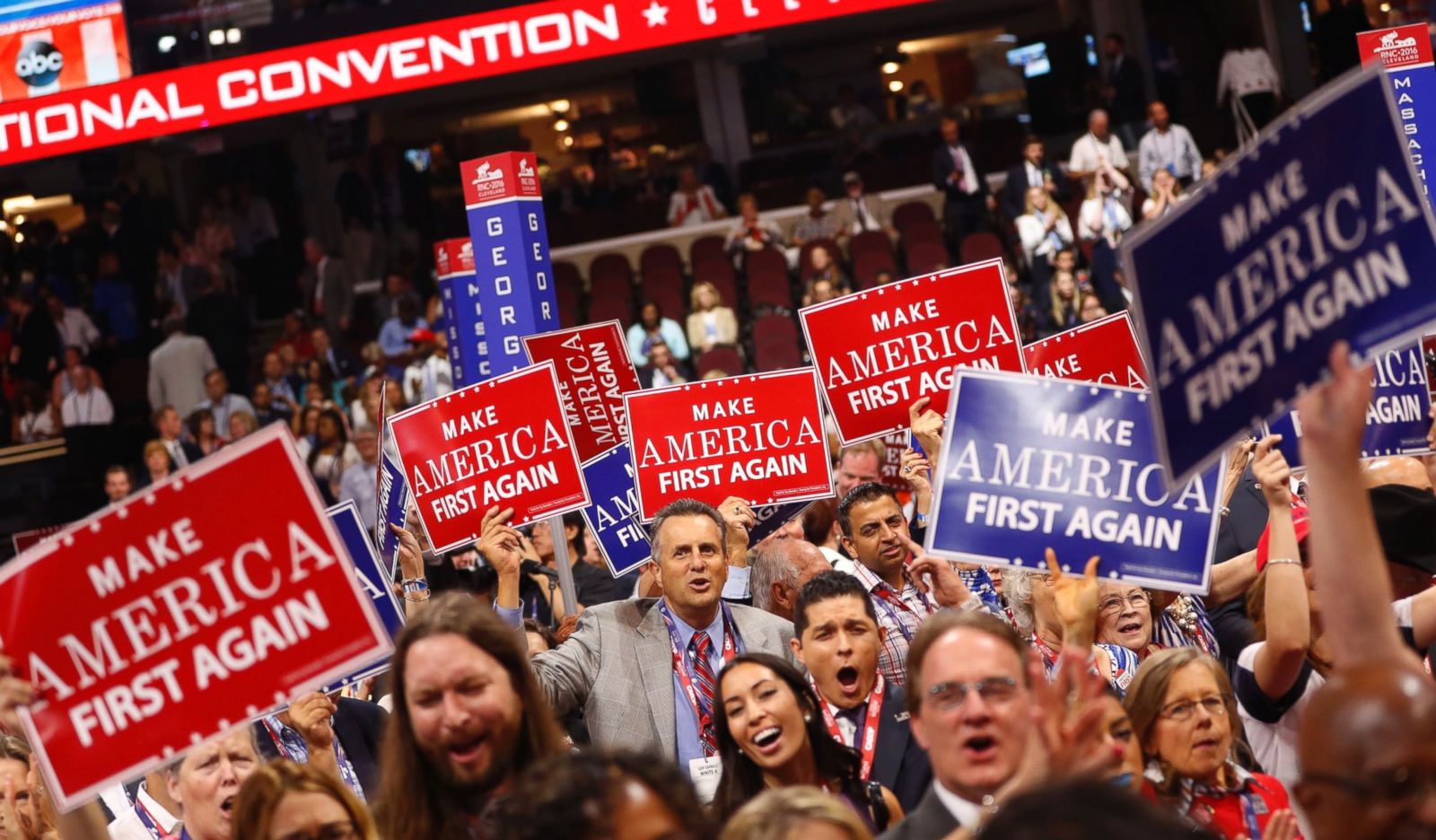 The Republican National Convention has been taking place for the last 3 days in Cleveland, Ohio.

The point of the convention is to nominate the Republican candidate for President of the United States, which we all now know, is Donald Trump.

This year, it appears that the Trump nomination has had a knock on effect on the convention, which resembled a bad LSD trip endured in a room full of rednecks.

Personally, I watched the convention using a feed found on Youtube being streamed by Fox 10 Phoenix, a local affiliate of the Rupert Murdoch owned channel. The beginning of the stream showed very little, a hard camera shot of people milling around the inside of the Quicken Loan Arena, taking their seats and chatting.

Then it all went a little strange.

In a small corner of the arena, music began to be played. Not from a PA system, but from a live band.

This isn’t the strange part, at least not yet.

Before long, the entirety of the convention centre was packed out by delegates and spectators, and they were rocking. A slew of cowboy hats, glitter, and anti-Hilary Clinton signs could be seen bobbing and weaving rhythmically, and some not so rhythmically, to the strains of Johnny Cash and REO Speedwagon.

Imagine if you would, a small-time Britpop style band playing Oasis’ “Cigarettes and Alcohol” in the corner of the ACC in Liverpool, during the Labour party conference this year.

Not content with simply playing their songs to keep the crowd somewhat entertained, but playing to the crowd during instrumentals with phrases such as “come on Labour party put your hands in the air!” To which all the attendees would enthusiastically oblige. Or if they were to say “Let’s hear it for Jeremy Corbyn!” Again, met with a volley of loving cheers.

That’s just the beginning, the actual speaking part of the conference was more of a trip. I don’t mean the politicians who spoke, not Scott, Walker, Cruz or Gingrich, but the non-politicians.

There was a pastor of a mega church who spent his speech screaming into a microphone, with surprising charisma, to the screams and cheers of the crowd. There was the nutraceutical saleswoman, who walked on stage and spent the majority of her speech discussing how she set up a circus when she was younger, before proclaiming that Trump would be a good ringmaster, because she definitely has the expertise to make that judgement.

What all this shows a viewer from somewhere other than the US is that their politics isn’t about boring policy ideas, long meetings in a room filled with other overpaid, underworked elected officials or even about helping people. It’s about entertainment. It’s a show, that’s why there’s a band playing beforehand, that’s why the crowd reacts like they would if they were at a Cleveland Cavaliers game, and not a political convention.

Would it be even slightly feasible for a rendition of Rule Britannia to begin after Theresa May announces a cut to NHS funding? I highly doubt it. We can see this entertainment element throughout the campaigns, the flash, brash, entertaining candidate is the victor and could be the leader of the country.

The use of a myriad of insults and jibes directed towards his opponents and critics has put him in a prime place to win, and it has culminated at the convention.

One final point, I urge you, nay, I implore you, go to Youtube at about 1am tonight. Find a feed, preferably the live feed from Fox 10 Phoenix, and watch it. You will not be disappointed. In that, you won’t be disappointed in an entertainment sense. You’ll be massively disappointed at the state of politics in one of the world’s biggest superpowers.