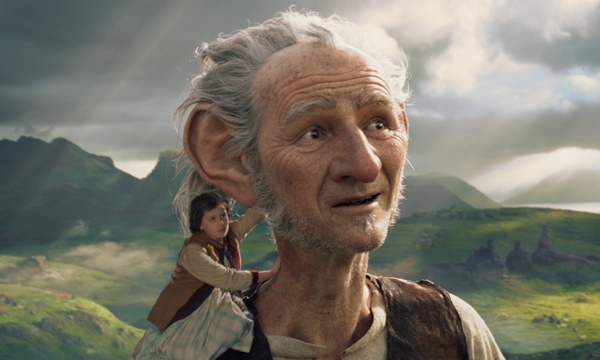 When I went to see The BFG, I had every intention of disliking it.

As a bit of a film snob and a fan of Roald Dahl’s beloved children’s books, I thought director Steven Spielberg and writer Melissa Mathison – for whom this film was her final writing credit before passing away in November last year – might just turn it into a tacky blockbuster.

But boy was I wrong. The BFG has turned out to be one of my favourite films of 2016 so far.

Anyway, I don’t really need to explain what it is all about. But I since we all love it so much, sit quietly children, while I tell you a story.

Published in 1982, the book begins with a little girl called Sophie (Ruby Barnhill) as she lives in her curious little world in an old fashioned London Orphanage.

But one spooky night during the witching hour, she sees something very odd indeed. It is a dark figure in the street and it is peering into windows. But that is not all, the mysterious stranger is taller than the buildings.

Then suddenly he sees her and before Sophie knows it, a massive hand slips into her bedroom and steals her away. He swiftly flees and the pair go galloping across fields and seas and travel to a distant foreign land.

When Sophie becomes accustomed to her surroundings, she finds her kidnapper is in fact a giant (Mark Rylance) and she fears for her life. However, she soon realises that he is just a big friendly giant (the BFG).

Her new friend is a rugged, ragged man who is hundreds of years old and lives in a little house in the country. In his spare time, he catches dreams and blows them through a horn into the bedroom of children, so their slumber can be filled with wonder.

Nevertheless, it is not long before the villains of the piece arrive on the scene. It turns out that giant country is filled with, well, giants. But they’re not all as splendiferus as our leading man, as they’re a bunch of grumbling, stumbling, child-chewing rotters. Yes, these monsters stomp across the world every night and feast on children human beans – oh, I mean beings – who have been snatched from their beds.

So after a few days of life-threatening and mind-boggling adventures, Sophie and the BFG hatch a plan to save all the children.

They concoct a dream for the Queen of England (Penelope Wilton) where she envisages all that Sophie has found out about the giants, the children, and of course, the BFG. When she wakes, the Queen is startled to find her odd dream is in fact coming true and she meets Sophie and the BFG and they plot to stop the munching monsters.

So after a risky plan has been carried out and the armed forces have successfully deposited the baddies on a little island covered in foul snozzcumbers, the BFG can live in peace in his quiet land and Sophie can finally find a home.

OK, so as I said earlier, I loved it. I felt that every aspect was very cleverly handled and even although there were a few tweaks that didn’t match the book, the film stayed close to the heart of the novel and Dahl’s themes.

The visuals were striking, with the BFG’s home and dream country looking  gorgeous. The vibrancy of the CGI was subtle enough to make it breath-taking, without being showy.

However, most importantly, Sophie and the BFG were all I could have hoped for. First of all, I am always really impressed by child actors who not only manage to act with convicting competence but do so with a set and other characters that aren’t really there. Young Ruby Barnhill made me feel like the Sophie from the book, with all her looks and quirks, had come to life.

Next to her, the BFG was exactly as he should have been. He was kind, gentle, vulnerable and like a quaint, elderly country man from old times. It seems silly to say, but his eyes were full of dazzling depth and his voice was soft. He was so adorable that I filled out the adoption papers right there and then in the dark.

So after a summer of utter gobbelfunk  and gobeltiglump at the cinema, I would strongly recommend you go and see this film if you want a scrumdiddlyumptious take on this classic children’s novel.

A country for all - except you, of course