PolSocWatch is a monthly rundown of what the political societies on campus are up to. This month we are focusing (as you might expect) on their Give It A Go events for Freshers. 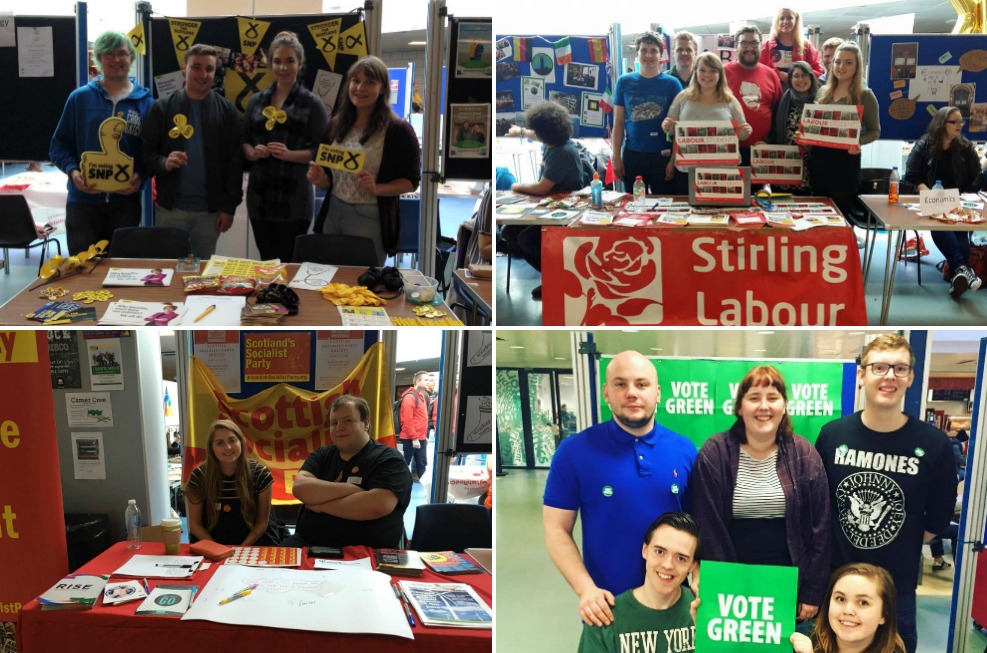 So, another academic is year is upon us.

For political anoraks, activists and student party members, this is also the time that political campaigning kicks back into gear on campus – and Stirling has a reputation as a highly politically active campus to protect.

What are all the political societies up to for Freshers season and beyond?

First up, let’s deal with the colossus that is SUSNA (Stirling University Scottish Nationalist Association), who are of course part of that even bigger colossus, the SNP.

For its Give It A Go, the society will be taking its members and interested newbies into Stirling town for some romantic nationalist sightseeing.

SUSNA president Christina Hendry said: “This year SUSNA has big things planned. For our Give It A Go we’ll be ‘seeing the sights’ in the centre of Stirling.

“We’ll be meeting in the atrium at 7:30pm on Monday September 19, where we’ll then be split into teams before heading into town to complete various tasks.

“Come along to experience the social side of the society, all welcome!”

Christina is hoping for a busy and successful year, and told Brig the society would also be welcoming the SNP Students National Council in October.

“We’ll be debating and discussing a range of topics with other students from around Scotland,” she said.

“We’ll also be welcoming Councillors, MSPs and MPs to the university to take your questions and discuss issues that matter to you.”

Meanwhile, Stirling University Labour Society have been growing in numbers and strength over the past year on campus, and are planning to hit the ground running with
a Give It A Go event including speeches from Neil Findlay MSP and prominent socialist campaigner and writer Cat Boyd.

The society’s event, called “What is 21st Century Socialism?”, will be on Tuesday September 20 at 7pm in Cottrell A5 lecture theatre.

President Rachel Bradshaw told Brig it would be “a night of debate with speakers Neil Findlay and Cat Boyd and other MSPs and Trade Unionists, discussing a variety of topics about the stance of socialism in today’s society as well as where socialism’s place is in the
future.”

She added: “The event will also cover the challenges that socialists of the 21st century face today, and questions will also be taken from the audience at the end of the event.

“This is an event to give students the chance to meet the society and see what we are planning to do this year.

“We hope to see you there and at our weekly meetings, check our social media for more details!”

They are also next week’s ‘Society Spotlight’, and will be holding a pub quiz in the Union at 9pm on Monday.

Another society which has put themselves on the map in the past year is the University of Stirling Conservative Society – by simple virtue of the fact of its existence, which for a couple of years was hard to find proof of.

The society will be holding its Give It A Go on Monday September 19 in Cottrell 2B42 – or you can meet them in the atrium first at 7pm. It is their first “Pizza and Politics” session of many to come throughout the year, and is basically eating pizza and talking about politics.

It could prove difficult time-wise for any Tartan Tories among you, or just any SNP supporters who really like pizza and/or arguing with Tories, but in theory there’s time for a quick bite and rant before jetting off on SUSNA’s magical mystery tour.

President Gregor Ironside assured Brig: “We’ll be having a friendly evening where people of all political persuasions are welcome to come and have pizza with us.”

Meanwhile, the Stirling University Greens will be hosting what has been dubbed a “Green Party Party”, which sounds wild.

It will be kicking off in the atrium at 7pm on Tuesday September 20, which will probably be a problem for any of the Green-leaning but pro-Corbyn Labour entryists I keep hearing about, given that it directly clashes with Labour’s event.

The Facebook page for the event says: “Stirling Uni Greens are a fun, active political society on campus who aim to promote the Scottish Green Party amongst students and the
local community.

“If issues like the environment, equality, radical democracy and peace are important to you then we might just be a good fit.

“All are welcome to our first event of the semester, whether you are already a Green Party member or are just curious.

“There will be party games like pass the parcel and musical statues, time to get to know current members and the committee and some special guests. We’d love to see you there!”

The big meanies at the University of Stirling SSP never got back to me, but I totally don’t care. They’re definitely around, but as far as I can see are not holding any kind of Give It A Go.

But I have it on good authority that Stirling Uni SSP and the general Stirling SSP are, to all intents and purposes, basically the same. To that end, the Stirling branch are holding a curry night in Rana’s on Friar Street in… well, it started ten minutes ago, at the time of publication.

I’m not saying it’s not a bit short notice, but if you’re a true socialist, you’ll get your coat and go – NOW, DO IT NOW.

According to Facebook: “Anyone who is interested in the uni society is welcome to come along!” They used an exclamation mark, which is commonly known as the best way to express enthusiasm with internet words without endorsing the cultural hollowness of emojis.

Finally, yer actual PolSoc are having a mock Parliament event for its Give It A Go, starting at 7pm on Thursday September 22 in Cottrell 2A9/A11 (which is *cough* the same venue for Brig‘s *cough* Give It A Go on Tuesday).

PolSoc – or Stirling University Politics Society – have also generously allowed for some post-Brexit commiseration drinking in the Union after their event.

Facebook informs us: “After a brief introduction to the society and committee, you’ll split into small teams and work to create your very own political party, complete with coups, symbols, backstabbing and terrible puns – you May have been warned.

And that rounds up PolSocWatch for this month – see you here in October for the next instalment!

Jeremy Corbyn: Momentum, but not much mass

The fire is not out in the independence movement