Back in 2012, the night before he won the programme, I tweeted that “James Arthur might be the first properly good artist to come from The X Factor if treated correctly”.

Fast-forward just under four years later and James Arthur is on the up again, ready to release his second album on Simon Cowell’s label, Syco.

In that time, however, things haven’t been plain sailing for Arthur. He was dropped by Syco in 2014, two years after winning the The X Factor and releasing the highest selling winner’s single ever – a cover of Shontelle’s ‘Impossible’ –  an achievement that still stands to this day.

Arthur initially left the label by mutual agreement, after attracting a string of controversies, including rapping homophobic lyrics at an event, something which angered Simon Cowell no end.

But he’s back. Arthur’s new single, ‘Say You Won’t Let Go’, is top of the charts, and he has just become the first artist ever to be re-signed by Syco, a label notorious for dropping talent show winners like flies.

But what happened to change Arthur’s fortunes? For a start, ‘Say You Won’t Let Go’ is a beautiful, brilliant song, written himself. He’s an extremely talented singer and songwriter – one who clearly captures the imagination of the public – something that cannot be said of previous X Factor winners such as Ben Haenow or Sam Bailey. Both were dropped by Cowell – not undeservedly – just over a year after their victories, in 2016 and 2015 respectively.

On a recent This Morning interview, Arthur admitted that he was suffering with depression before, during and after his time on The X Factor, and that he struggled to deal with the fame, attention and scrutiny appearing on, and ultimately winning, such a big TV show inevitably brings.

Arthur, at one stage, seemed to bring controversy wherever he went, including arguing with fellow X Factor alumni Lucy Spraggan, as well as dissing label-mates, the world’s biggest boyband – One Direction – in 2014. He’s admitted to being “embarrassed” by his behaviour since winning the show, and seems genuinely apologetic, as well as in a place in which he is far better equipped at dealing with the trappings of fame.

Cowell must see something different in Arthur to the man he was when he dropped him two years ago, as being the first act he has ever re-signed is no mean feat. The recent change in perception over Arthur is somewhat remarkable. His Twitter following has shot up, he’s on course for a number one single, and the public and press seem to genuinely want him to succeed.

The Sun have gone from calling him “the biggest bell-end in pop” in 2013 to saying, this week, that “it’s great to see him doing so well”. Quite the turnaround. Cowell obviously kept a close eye on Arthur following their split, and clearly he’s knuckled down and focused on the music enough to convince the X Factor supremo that he’s worth another shot.

James Arthur has earned his second chance, and if ‘Say You Won’t Let Go’ is anything to go by, then snapping him up once again is a clever move by Cowell and Syco. And who knows, maybe my tweet will prove correct. Albeit four years later.

James Arthur’s second album, the aptly titled ‘Back From The Edge’, is released on November 4th. 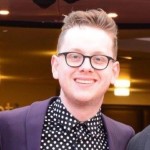 Theatre Preview: A witty twist for Donizetti’s The Elixir of Love