We could all learn a thing or two from philosophy.

Questions of what makes a citizen a citizen, who can and how we participate in the processes of democracy (if democracy is even preferable), whether our own concepts of participation and democracy stand the sniff test, and who we should look to in an age of increasing intolerance all crop up.

Many of us who have received a state school education will have learned most of the basics: Maths, English, a few sciences, perhaps a language or two, Modern Studies, History, and so on.

One that gets a particularly skewed reputation is RMPS. Often seen as a “soft subject” and “wooly”, Religious, Moral and Philosophical Studies should provide students with the tools to become critical thinkers and inclusive individuals.

I know myself I regarded RMPS as a rather easy ride; it was all just making dream catchers, and learning about Buddhism and Krishna’s wives.

Where I feel, upon reflection, RMPS was lacking was its third area of interest: Philosophy.

From Plato to Descartes, from Hume to Crick, from Hobbes to Macpherson, each philosopher – both ancient and contemporary – can inform our understanding of our place in the world, at a time when things seem to be moving inexorably out of control.

Ofttimes we take the rat race for granted, assuming this is the only way things can be, instead of daring to reach out with our imaginations to a better possibility beyond.

Do we have to live in a representative democracy, or could we become more like a classical direct democracy, where citizens would rotate through official positions and directly vote on the issues of the day? 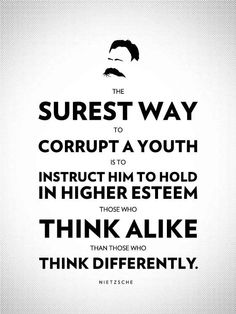 It might not even sound so crazy: Recent discourses in the UK have seen cities and regions seeking greater autonomy, and with the power of the Internet who is to say we cannot have great public debates online?

As we have seen in recent years, moves to suppress any one religions way of life will have adverse effects on the social cohesion we should all be allowed to enjoy.

This he wrote in ‘A Letter Concerning Toleration’, which to this day speaks down the generations about the importance of accepting social diversity.

Philosophy – love of wisdom – encourages enquiry and critical thinking, debate, and the ability to accept opinions not your own. It forces us to look outside the boxes we place around ourselves and others in order to achieve a new and, perhaps, better means of living in the future.

It is not just mystical backdrops with profound quotes written across them, philosophy is a continuous process towards understanding, and enhances our ability to empathise and feel motivated to help those at the receiving end of hate.

Without philosophy becoming integral to education throughout our formative years, we risk allowing the dead dogmas to win over, and for the sickness of parochialism to spread throughout the world.

As Socrates said: “The unexamined life is not worth living.”

How important is traveling as a student?