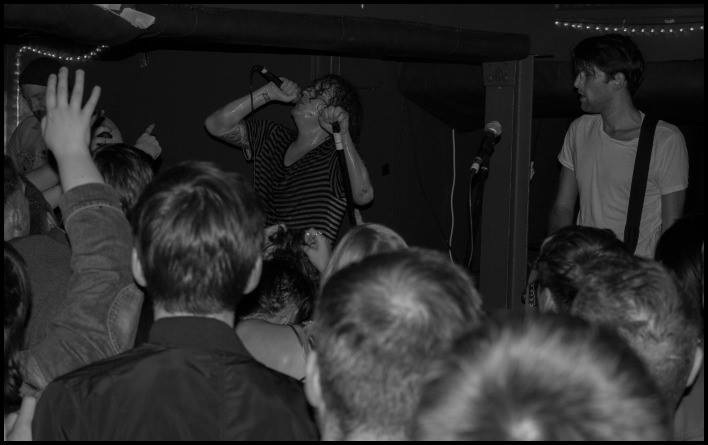 Curiously enough, it is often the acts you least anticipate seeing that put on the most memorable performances. For the fifth time this year, I have had my middling expectations for a live act completely blown apart, and if I take one thing away from 2016 (other than nobody and nothing is safe), it’s to never underestimate a band.

I originally intended to practice concert photography during the Pigeon Detectives: took my light levels; got a space so close to the front I was practically onstage. By the time they hit ‘I Found Out’ – two songs into their set – I had to drop those ambitions, partly due to an explosive crowd surging forward and threatening to break my camera, but also because I didn’t realise how much I actually liked them until I saw them in person – it didn’t seem right taking photographs when my overriding feeling was to dance along.

Hailing from Leeds, the Pigeon Detectives are very much a product of their time, their time being that early 2000’s wave of British Indie that included The Libertines, Arctic Monkeys, The Cribs etc, the latter of whom are one of their closer musical comparisons. The Pigeon Detectives have enjoyed relative success with platinum certifications and major festival slots, but have been very quiet since the release of their 2013 album ‘We Met at Sea’.

In many ways, this tour is a comeback for them, a chance to prove that they are still relevant, and to build up hype for their upcoming LP. They’re back to playing smaller venues, Broadcast surely being about as small as they come. Even vocalist Matt Bowman remarks on how low the roof is, and how the column that runs up the centre of the room is perfectly positioned for him to crack his head off.

The band do not allow venue size to neuter them however. In fact, it plays to their advantage. It was tempting to make a joke about an aging indie band that has recently fallen off the radar having a song called ‘Everybody Wants Me’ but based on the crowd’s reaction, a lot of people do. A sold out show, the audience surges as a unit, reacting to every song with manic fervour, frequently threatening to rush the stage. In fact, as the band closes their set with ‘I’m Not Sorry’, the crowd makes good on this threat, swarming the stage to the point where you can’t actually see the band leave. Not a bad response for a gig that clashed with the return of Still Game.

The Pigeon Detectives absolutely earn this response, playing like their careers depend on it, but still with a looseness that indicates they are enjoying themselves as much as the crowd are. Opening with ‘Emergency’, the band blitz through an hour-long set list that covers all their major hits, mostly ticking those off their debut and sophomore albums but still finding time for the Scottish debut of their new track ‘Lose Control’, which definitely fosters enthusiasm for a new release that Matt confirms will be out next spring.

Taking a break has not hampered the band’s performance abilities: the band sounds unfaultably tight, and Matt effortlessly works the crowd with Daltrey-esque microphone gymnastics (made all the more impressive by the low ceiling), pouring a fridge worth of water on the front row, and in one of the most uplifting moments of the night, taking an audience member’s phone off of them, filming each individual band member, the increasingly frenetic crowd, then returning their phone, safe in the knowledge that he has probably made somebody’s week. There seems to be genuine reverence for the audience, like the band are genuinely honoured to just be playing to an enthusiastic crowd again.

This is the kind of gig that makes fans of casual listeners. There is little doubt to me that the Pigeon Detectives will swiftly work their way back up to larger venues in the future. But before then, they return to Glasgow in March to play Stereo, and as much as I hate to forcibly plug anything, I’ve got to recommend it to anybody with even a passing interest in the band. Even if you only know them through ‘Angus, Thongs, and Perfect Snogging’, you’re not going to regret checking them out.

Album Review: Scaled and Icy by Twenty One Pilots

A local father has called for more action from Stirling Council to eradicate Giant Hogweed, after…

Team GB's Duncan Scott closes in on a historic medal tally at the Tokyo Olympics.…

Break-ups, beef, and bags packed for home - the Love Island Villa has had a busy…