Valentine’s Day is a good occasion to get out for a proper meal. There are loads of dimly-lit, cozy places around Stirling and Bridge of Allan (The Crook Bar is a nearby, mellow spot, The Birds and the Bees, or – if you feel really generous – the Sheriffmuir Inn).

However, if you’d rather chill and stay in (and save some cash, especially if you went to the Sheriffmuir Inn last time), why not treat your plus-one, or a pal, to a proper gourmet steak made in your own kitchen?

Ignore all the fear-mongering the pristine-white-aproned cooking show chefs try to instill in their viewers, regarding the virtually unattainable ‘art of cooking a steak’. That’s just hornswoggle, as are the numerous ‘trade secrets’ they feign sharing with their audience.

These range from never using salt on raw beef, never cutting the steak prior to a 20-minute rest period, only using cast-iron skillets for searing, etcetera.

Being required to prepare the coveted medium-rare filet mignon for my Culinary Arts practicum, I quickly found that all said ‘tips’ are completely inconsequential if the following three paramount rules of preparing steak are observed (I can also vouch that no honest chef’s apron will ever realistically be white).

I cannot stress this enough. Whatever your cut of meat (outlined below), whatever level of freshness, whatever sauce you plan on using, a marinade can only improve the end result. In other words, there is no steak that a marinade can harm.

The point of it is to infuse flavour, and tenderise. It’s the marinade that will make your steak-knife slide through the fillet in that satisfying way, not the way the steak was prepared.

In the case of a tenderloin, it will also infuse flavour as the leaner cuts are tender but lacking any particular taste; and in cases of the flavourful, tougher cuts, a good marinade will make them more manageable and less chewy.

Searing, or sealing, is browning the steak on all sides in a sizzling pan. For some cuts, this will be succeeded by oven-roasting, especially if you chose a bone-in steak. For the leaner cuts, such as strip or fillet steaks, you can prepare them directly in the frying pan without any further fuss.

Patting the steak completely dry before you sear it is essential for thorough cooking. If there’s any liquid on it apart from oil or butter then it simply won’t brown, but will dry from the outside in.

The ‘traditional’ popular steak cut is tenderloin; it comes from the cow’s least used muscle, which ensures tenderness, is very lean, and the most expensive. It’s versatile though: as mentioned above, it doesn’t have a very strong flavour, so you can use virtually any sauce and marinade with it. 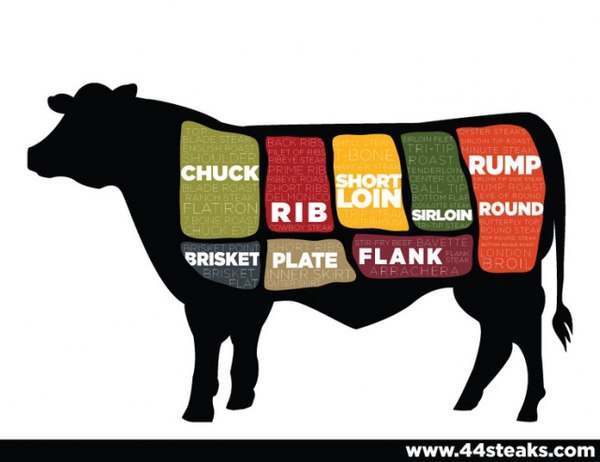 This is the most common contemporary choice as it’s more flavourful and cheap, and deemed less extravagant (i.e. not pretentious). Same goes for the sirloin.

The bone-in steaks are the T-bone, rib-eye and the porterhouse, among others, all of which are usually best prepared on a gas grill. There’s also the rump or round – a far-back cut, and brisket – a chest cut, both of which are best slow-cooked.

For our intents and purposes, pick between a tenderloin, a strip or a sirloin cut, as they have similar cooking times and methods.

This is a pretty easy recipe, using minimal ingredients. Make sure to marinade the steak at least 8 hours before cooking, but preferably overnight.

Tesco has good cuts of tenderloin and sirloin for about £5. For this recipe, I got a £6 tenderloin from M&S, because they cut them slightly thicker, which keeps them from overcooking too easily.

The rest of the ingredients (portioned for 2 fillet, strip or sirloin steaks) are as follows.

A good drizzle of olive oil

Chop up the garlic and the herbs, mix everything together, and ideally pour into a zip-lock sandwich bag together with the steaks. If you don’t have one, just mix everything in a bowl, add the steaks and cover. It’s not necessary to season the meat at this point, since the marinade will be pretty salty and spicy already. Place in fridge.

About an hour before your dinner is scheduled, take the bowl or bag out of the fridge and let it come to room temperature, which will loosen the steak fibers.

While you wait, get started on the sauce:

A sprig of thyme

A dash of dry white wine

Ideally you’d be cooking the sauce and the steak at the same time, but multitasking can get pretty fussy, so prepare this first and keep it warm on a low heat.

Chop the shallot or onion and put it in a deep pan over medium-high heat with the olive oil. Chop the mushroom finely, but leave a few quartered. Once the onion becomes soft, in about 2-3 minutes, add the mushrooms and thyme. After another five minutes add salt and pepper (add a bit of chili, if that’s your thing), and stir. Add the soured cream or yogurt (don’t use single or double cream, they would make it too heavy), mustard and wine, and lower the heat, stirring occasionally for about 10 more mins. Check for salt, and put to the side.

For the steaks, put a pan on high heat and melt a small knob of butter in it. Add some olive oil, a garlic clove and a thyme sprig (optional). Make sure the pan is piping hot. Also preheat your oven to 180C. Remove the steaks from the marinade and pat them completely dry. Season well with salt and a bit of black pepper.

Why so much salt if the marinade was already super-salty? ‘Cause science: long-chain carbohydrates in cooked food tend to neutralise natural salt by binding in the sodium ions, so that salt needs to be replaced for flavour.

Put the steaks in the pan, and resist the temptation to move them or check on them for about a minute and a half. Then flip them over, and repeat for another minute and a half. If you managed to find thicker cuts, then also sear the edges, holding the steaks up vertically with tongs or a sharp knife, about 15 seconds per side.

Once all seared, loosely wrap them in tinfoil, and put them in the oven for about 3-4 mins, for medium-rare. The ones I made only needed 2-3 minutes in the oven. Don’t be afraid to cut a piece to check its done-ness.

Remove them from the oven, still wrapped, and let them rest for 5-10 minutes.

Then transfer them to plates, either whole or carved, pour the sauce over them, and serve with your favorite side (anything from green salad, to mash, to crusty bread. Wedges go nice with the sauce, I find), a lit candle, and a bottle of wine. Enjoy!

Plan B: In a scenario where something goes awry, don’t panic or throw away the steaks – chances are they can still be salvaged as less-romantic but endlessly-practical beef fajitas. Just chop them up, mix them with stir-fried onion and bell pepper, wrap in a tortilla with garlic mayo and easy pico de gallo, and have the mushroom sauce with tortilla chips.

Treat the vegetarians in your life this Christmas with Veggie Wellington

A beginner’s guide to a gluten-free Christmas

"Coming Out" of old habits