Among these, the Arts and Humanities Faculty accounted for over 1300 of these, a figure the faculty is worried is “unsustainable”.

Meanwhile three other faculties – the School of Management, the Faculty of Natural Sciences, and the Faculty of Health Sciences and Sport – only accounted for around 300 extension requests each.

The second highest was the Faculty of Social Sciences, which filed over 1100 extension requests during Autumn semester.

There are over 12,800 students at Stirling, including around 9450 undergraduate students and 3390 postgraduates.

Brig obtained the figures through freedom of information, but was denied a breakdown of the requests by division and department and by reasons for the requests due to prohibitive cost.

The university’s freedom of information unit claimed that the expense of collating all the requested information would cost nearly £2000 in staff time.

According to the university’s policy on assessment and academic misconduct, a faculty record must be kept of extensions granted.

Extensions can only be given in exceptional circumstances, such as unavoidable detention elsewhere, like a hospital or court visit, as well as medical grounds or compassionate grounds, such as the death of a loved one or serious mental health problems.

Other exceptional grounds are considered on a case-by-case basis. 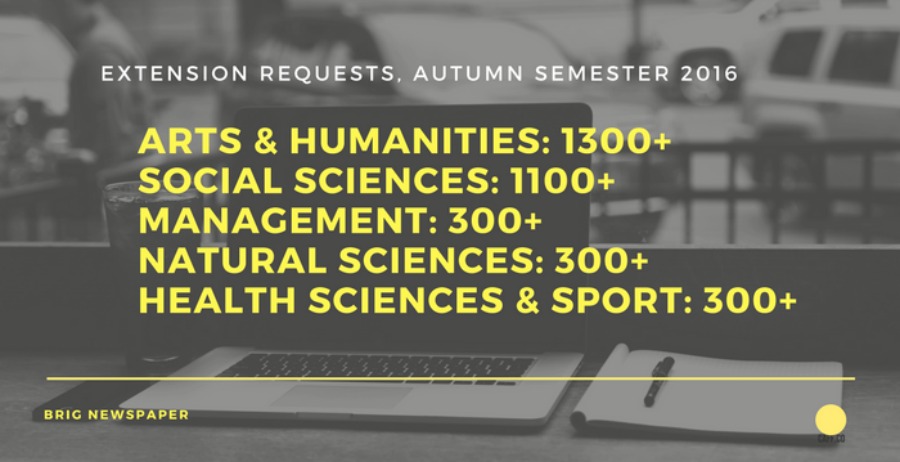 VP Education Matt Adie said: “At present, a student in POLU9CR [a politics module] could apply for an extension given in a certain circumstance and be granted a week’s extension, whilst a student, citing the exact same reason on a different module, could be given one for only three days.

“As part of this, it was highlighted that Arts and Humanities had received over 1300 extension requests and they were concerned this would be unsustainable going forward.

“Part of the outcome of this was that the university agreed to adjust the regulations for coursework-only modules – allowing students to submit coursework beyond the end of teaching – which was previously not allowed.

“Standardisation around the granting of extensions is being picked up in the ongoing review of the ARUA.”

ARUA stands for the Agreed Record of University Adjustments, which is an outline of adjustments that tutors should make to an individual’s learning experience to better support their needs.

A spokesperson for the university said: “Extensions for coursework may be granted in exceptional circumstances and are agreed by module co-ordinators in advance.

“The university may consider granting an extension on medical or compassionate grounds, and students can access additional support in these circumstances.

“An extension may also be granted when it is mandatory for a student to be away from campus.

“This can apply to students who are representing the university, including scholars who participate in national and international sporting competitions.”