Entries for the Stirling Marathon dried up pretty quickly, perhaps leaving you scuppered from some motivation in your training regime. However, if you are still looking for a challenge, here are seven spring and summer challenges to keep you moving forwards.

Come on, how could you not mention another home race? The Dumyat Hill Race has been going strong since 1973.

Interesting story – the race started after a university psychologist at Stirling bet £1 that it was impossible to make the trip from the Gannochy to the iconic top of Dumyat in under one hour.

Safe to say, the bet was lost, and it has been held every year since. Or so the story goes.

Entries can be made here, and there are just 38 spaces available on the night!

Feeling fresh after your jaunt up Dumyat? Why not hop on over to Callander for a 10K, or a 5K or 1K fun run a few days later?

The event, organised by Skiddadle, covers both tarmac and trail, so it is a nice 60/40 balance for those transition runners among you, or those out to see the beautiful scenery.

Callander sits close to Ben Ledi, one of the Central Belt’s most iconic summits, and has some excellent chip shops, coffee shops and delis.

The race is part of the Trossachs 10K series, so if you fancy a run around Balquhidder, Killin or Aberfoyle, then check out the rest of the series at Skiddadle’s website.

The distance is set because of the sponsors Radio Forth, whose frequency is 97.3FM. It will also see the money raised from the event split between Cash for Kids and Mercy Corps, two excellent charities.

The route will take in the two Forth bridges, so there will be no lack of sightseeing on this trip on two wheels. Plus, it is a lot more affordable than some other sportives.

Feeling a little courageous? Well, perhaps tackling the iconic climbs of Crow Road and Duke’s Pass in one day is for you. If you are feeling doubly fit, then how about adding another pass of Duke’s to sweeten the deal?

The Trossachs Ton offers two routes: the Classic (120K) and the Champion (170K) routes. The route encompasses some of the most beautiful roads in the Trossachs, with the Champion route swinging around Loch Katrine before the second pass of the Duke’s Pass climb.

Both routes start outside Stirling, so not far to go until you are on the starting line. 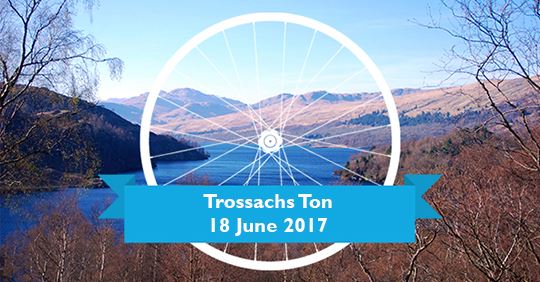 Another one close to home, Pedal for Parkinson’s will be held in Stirling on August 6 this year, with entry costing just £25.

With three distance options, this event is for people of any riding ability, so do not worry about not finding one at your level. If you are a higher calibre rider, I would opt for the Trossachs Ton, though.

Again helping a fantastic charity, the race will start outside Stirling High School, hopefully featuring some summer weather along the way!

Something a little less mainstream, but with a powerful story behind it. Tom Robb suffered from dementia, and in August 2012 disappeared into the forest he had lived and farmed close to for over 50 years.

Now, a race is run in his name, with the entry fee going towards Alzheimer’s Scotland and the Ochil Mountain Rescue team.

For a great cause at little cost, runners can experience the natural beauty of Carron Valley, just outside Stirling.

By now, students will be heading back to university, but no need to be glum! You can start off the university semester by lacing up and running 10K around Stirling.

For Freshers, it is a great chance to see the city you are going to be confin- I mean, living in for the next little while.

Central Athletics describes the race as “flat and fast – ideal for first time 10K runners”, so you should have no qualms about this one.

The race has been a staple in the Central Athletics calendar since 2009, so why not get involved in a bit of history and give it a shot!