Inside sources at Stirling Council claim that new councillor Alastair Majury, 35, was “talked out of resigning at the last second” after coming under fire for his notorious social media rants.

The Conservative councillor, elected last week to the Dunblane and Bridge of Allan ward, was discovered to be behind a anonymous Twitter account used to spread offensive views from a pro-Union perspective.

Using the Twitter handle Mulder1981, Majury likened the SNP to Nazis and accused the party of focusing too much on Trident and gay marriage instead of tackling poverty. 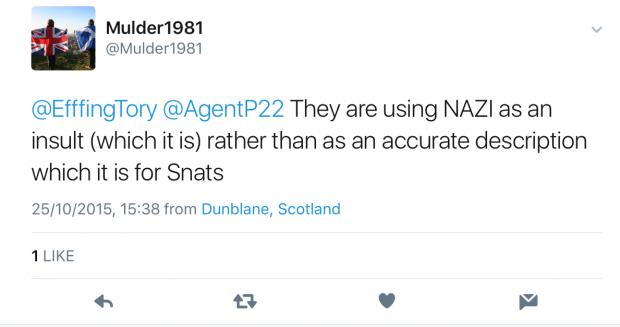 The account had become well known during the Scottish independence referendum after researchers at the University of Glasgow’s Policy Scotland institute named it as one of the No campaigns most influential accounts on social media.

The revelation that Majury was behind the tweets sparked criticism and the new councillor was planning to resign until he was convinced to stay, Brig understands.

It also recently emerged that the councillor had used a dating website to boast the size of his penis, claiming it was “7-8 inches” long.

He added: “I can’t believe that most women would be satisfied with less than 5inches (or even less than 6?), other than in ‘other ways’.”

On his dating profile on 7orbetter.com, Majury stated he was “looking to meet intelligent women who knew what they want.”

A spokesman for the Scottish Conservatives said: “The comments highlighted are completely unacceptable, and Cllr Majury apologises sincerely for any upset they have caused.

“He has been warned in no uncertain terms that this kind of conduct cannot be repeated.”

An SNP spokesman criticised the “abusive extremism”, saying: “This is yet another example of Tories welcoming abusive extremism into their party, emerging just days after Mr Majury was elected.

“People across Stirling will be deeply concerned that someone with this kind of opinion is now in charge of running their local public services and local schools.

“The Tories have become UKIP – they must take immediate action to show that this kind of opinion is not tolerated in their party.”