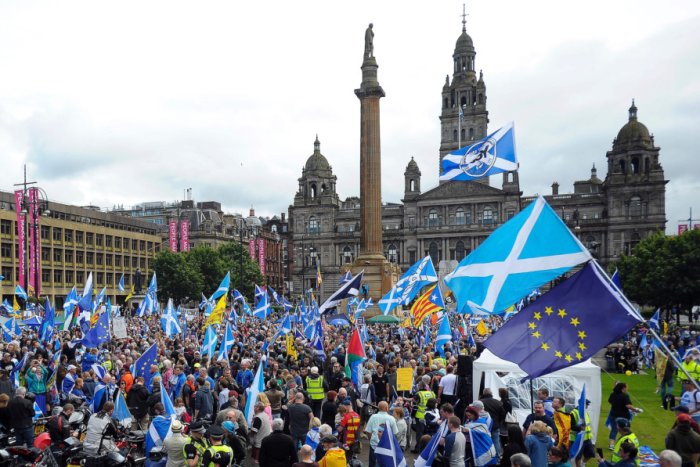 Opinion polls taken since the 2014 referendum paint a picture of support slowly trickling away from independence. Polls don’t tell the whole story, but they correlate with what we are seeing on the ground.

Formerly active and vibrant Yes groups have either folded, become social gatherings or are dominated by nationalists detached from reality.

Comparing the SNP of 2014/15 – buoyed by 100,000 new members and electoral domination – to today seems like day and night. The Nationalists have paid a huge price for not making the case for independence at any election since the referendum – and allowing themselves to be chased away from the issue by the Unionists.

The Yes campaign we got behind in 2014 found strength in its diversity. A majority of Yes supporters weren’t tribally SNP, and the Yes coalition helped reach out, particularly to old Labour supporters.

Today, the movement is too closely tied to the SNP. Their electoral failures are seen to represent a setback for independence. In reality there are many independence supporters who find it difficult to vote for the SNP when they duck the issue, and there are more leftwing manifestos on offer.

It took the 2017 General Election, where the SNP held on to a majority in Scotland by the skin of their teeth, to sound alarm bells. I was an independence activist before I joined the SSP and I’m infuriated to see the movement that we built from 2012 so dominated by a single party. It makes us weaker.

We’re now facing a new ‘threat’ in Jeremy Corbyn. He appears to many to offer a different route to the same social democratic goals independence offered.

His popularity in some quarters is based on backing Keynesian policies that may make working people’s lives better. That’s a natural attraction to people on poverty wages, waiting for a house or living at the sharp end of austerity.

His honesty and integrity has cut through the spin of modern politics and inspired many to imagine an alternative to neoliberalism. But he can’t achieve much within a party machine fundamentally opposed to his vision.

On the other hand, he has outmanoeuvred a fiscally conservative SNP who, acting as the independence flag-bearers, have defended the status quo. And none more so than by latching on to the idea the EU is some progressive organisation to be supported at all costs.

This prevents us from making independence about transformative change. That’s going to be necessary to win over Scotland’s working class majority – many of whom voted Leave in 2016 in the hope of any sort of change.

By seeking clarity on key social and economic issues and by being ambitious, we can align independence with struggles like that of the McDonald’s workers currently on strike.

The thousands of hospitality and retail workers in Scotland, who currently only dream of a £10/h Living Wage and secure employment and through guaranteed hours contract, can be persuaded that the only way to achieve these demands is through Independence. But we have to agree that’s what we want.

We can thank Corbyn for popularising ideas that we agree on then disagree on his vision of a British route to socialism and his misplaced faith in the Labour Party as its apparent vehicle.

This means the Independence movement must above all make a coherent and persuasive case and answer ‘what do we want Independence for?’ and ‘what went wrong last time?’.  Only then can we work out how we are going to get there.

This article was first published in the Scottish Left Review.