It isn’t often I make my way to report on a sports match, but as we are trying to write for as many sections as possible at Brig, I decided to bite the bullet.

With this in mind, out I went to a game of the only sport I thought I could sit through over an hour of without feeling the need to shout something on the edge of being politically incorrect simply to fit into the crowd – ultimate frisbee.

October 20 saw the Stirling and Edinburgh Men’s 1st face off in what was Stirling’s first game of the season as the newformed team.

For any other of the athletically challenged among you, here is a (short) list of the things I learned standing on a cold Wednesday afternoon by the side of a pitch, watching an ultimate frisbee game for the first time.

1. When someone shouts “hard D”, it’s not what you think

Not long had I arrived at the side of the pitch with the game just getting under way when I begin to hear a select few phrases that stood out as odd to me.  For all these athletic boys to be running around shouting phrases such as “Who’s gonna get the D?” and “HARD D! HARD D!” at each other in this environment.

I’m not sure when the decision was made between the inception of ultimate frisbee as a sport and this particular game being played to shorten ”Defence” to THE D. But watching this game, it was clear it had reached a point in which the humorous, self-aware nature of the odd phrase being used had worn off, and now it was just part of the sporting lingo, with no one drawing attention to the innuendo being so casually thrown around.

Now, I’m not one to perpetuate smut written in this newspaper, but I did find myself cracking a smile or two at the side of this pitch hearing these dirty, sweaty boys shouting these sinful atrocities at one another in such joyous disregard.

2. The intermission isn’t at a specific time, so you can’t plan your tactical pee

I had been by the side of the pitch now for a good while and my bladder was beginning to send me frequent thumbs-up emojs to get my attention. I’m not sure how long I had been standing, but I began to wonder exactly when there was going to be an intermission for the audience to get themselves an overpriced ice cream, stretch their legs and, yes, relieve themselves in the little boys’ room.

With theatre – a world you can probably tell I’m a little more used to dealing with – you know where you stand (or, in fact, sit) when it comes to judging how quickly to consume your liquids during the first act. Yet, here it was anyone’s guess exactly when to dart for the urinals so as to not miss any of the performance.

It transpired that the intermission did not fall at a specific time but at a specific score, when a team reaches a certain number of points, seven to be exact. The game’s length as a whole is also determined by score, with the game coming to a close when either team reaches 15 points, with an upper limit for curtain call at 90 minutes for the sake of the performers and spectators combined.

Having learned this, next time I very well may plan my liquid consumption and pre-game toilet visits more cautiously.

After spending the first little while trying to get used to the structure of the game and figure out the rules (which I will get onto later) I believed I had the concept down.

A moment then came when Stirling had thrown into the end zone, with someone making a catch and it very much seeming like our team had scored. Cheers and congratulations soon followed, yet as the game went on and I enquired about the score, it turned out that point had not been counted.

Turns out the other team had challenged the point and, as a result, the point was not given. This was called a Pick, and happens when a member of the opposing team is blocked from running after the person on your team they were watching by another member of your team, I think.

Challenges like this are always upheld because… (smooth segue into next point? yes I think so)

4. There is no referee in ultimate frisbee

So after the point I believed to be Stirling scoring was not counted, I began to wonder who made the ultimate call about the challenge to this ‘ultimate’ game. To my surprise I learned that there was no referee present at this game, or in fact at any frisbee games. Ultimate frisbee is rather unique in the fact it is self-refereed by the teams playing the game.

This is in place to promote good will and good sportsmanship within the game. It makes for a less aggressive, more friendly atmosphere on the pitch, and was pleasant to see in contrast to other sports that see referees breaking up fights on a match by match basis. 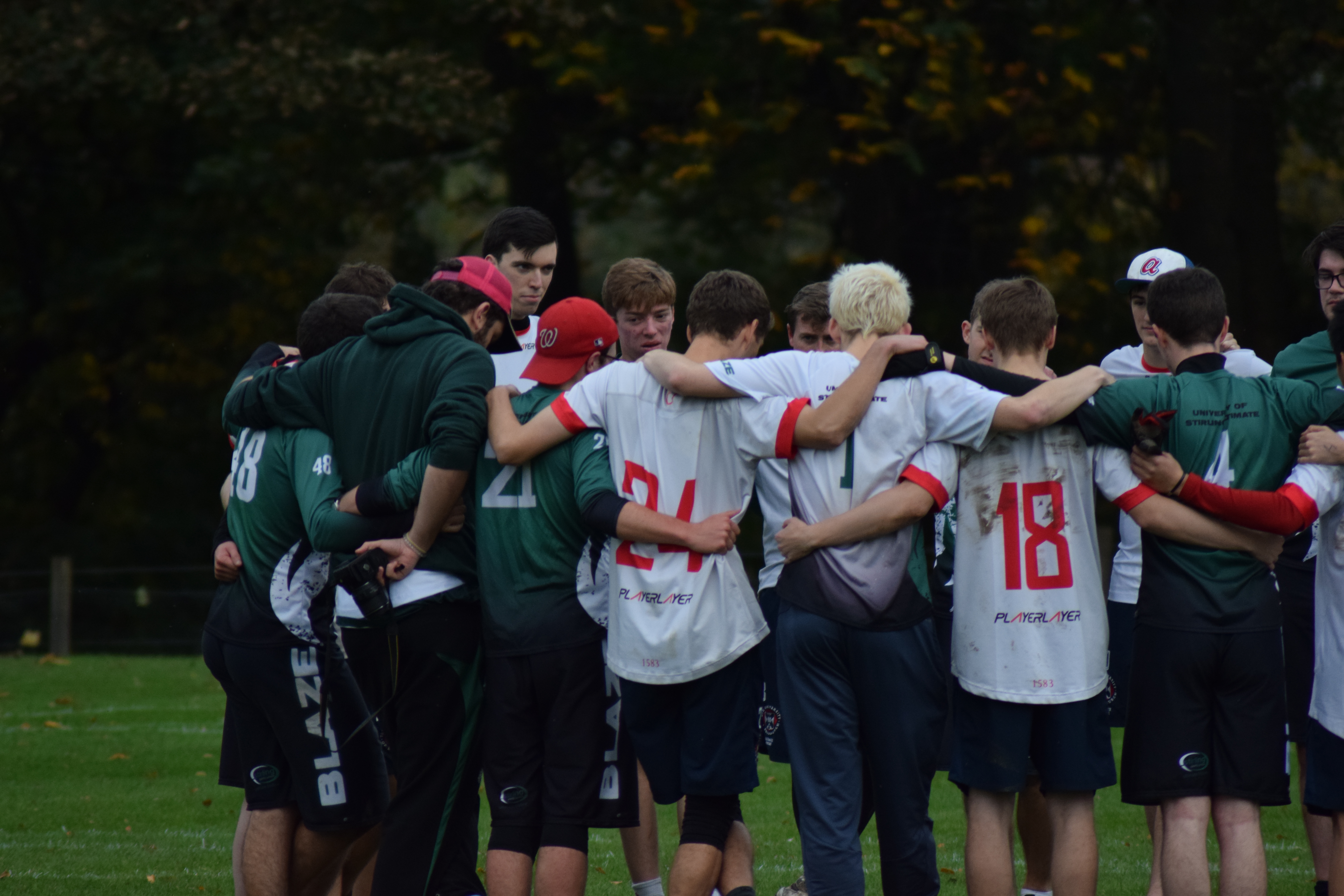 5.  Its pretty much American football, just with a circular piece of plastic and less touching

From the moment the disc is caught by that team, the are trying to throw the disc behind the line it was initially thrown from but have someone from their team behind this line to catch it – if they catch it, that’s a point.

With that very simple description, do you not think that sounds very familiar to American football? Take away the shoulder pads, change the thing they are throwing and make it less brutal-looking, and there you have it – ultimate frisbee. Ultimate frisbee doesn’t have the scrum-like “42, 62, 28 HIKE!” thing going on every few minutes, and there is less aimless colliding of bodies, but apart from that they are near identical games.

Yet despite this similarity one of them gets a reputation as a very macho alpha-male physically demanding sport while the other, well let’s just say isn’t quite graced with the same glowing reputation. Which neatly brings me onto my final finding.

6. Contrary to popular belief, it is a real sport.

Even as someone who doesn’t play ultimate frisbee, one joke I hear most often surrounding the game is how it isn’t a real sport. Truth be told, I have engaged in the perpetuation of this ongoing joke; what can I say? It’s an easy target – people throw frisbees for dogs.

However, after a long misty afternoon standing pitch side I personally felt tired from simply being stationary there, so for these players to be running, diving and throwing across this pitch at the rate that they were, well, I don’t know what people want from a sport if not that.

The boys came off the pitch, covered in mud, red-faced and panting, what could be more sporty. Thus I would conclude that ultimate frisbee is a sport and very possibly an enjoyable one to watch, granted you plan your bathroom trips accordingly.

208 days without a government