An unusual match, in which there were less than 15 attempted passes between the two teams. This led to the game being the quickest in my three-year tenure of covering the Clansmen, taking two hours and nine minutes from kick-off to the final whistle.

A rather stale first half that felt very repetitive for the most part, moved along quickly. Both teams relentlessly ran the ball and the score at halftime was 6-3 in favour of the visitors. After the Clansmen took the lead via a chip shot field goal, Leeds Beckett replied by rushing in for a short touchdown. A blocked PAT and a blocked field goal later in the half by Stirling, ensured the Clansmen were only three points down at halftime.

The game came to life in the second half, thankfully, and Stirling really stepped up their game. On the opening kickoff of the half, Nixon carried the ball up to the Carnegie 35 yard line. This good return was enough to spark Stirling into life as they briskly marched the ball down the field on the ground and eventually into the endzone for their first touchdown of the day. Running back from the one-yard line, Bawa carried the ball for a quick touchdown which was exactly the incentive that Stirling needed after a poor first half. The PAT was blocked, the third blocked kick of the game, so Stirling led 9-6.

Leeds Beckett then responded immediately with a touchdown of their own.  Another drive on the ground saw them motor through the Stirling defence and eventually the Carnegie QB kept the ball on a read option from the seven yard line and barrelled in for a touchdown. After a two point conversion was completed the score was 14-9 in favour of Leeds Beckett. The next Stirling drive took the game into the third quarter, so the score was 14-9 with only the fourth quarter remaining.

Last week’s MVP against Derby, Thomas Campbell, again took over the match and managed to score another two touchdowns, which brings him up to five touchdowns after only two games this season. The Clansmen defence chipped in with their first score of the season by scoring a safety prior to either of Campbell’s touchdowns, as Calvache touched down the Carnegie kicker who had recovered an overshot snap in the endzone. Stirling’s defence held strong for the rest of the quarter and never let in a score, meaning Stirling held on to the win.

Not the best performance from last year’s national champs. However, a win is a win. A convincing 15-0 in the final quarter gave the team a much-needed confidence boost before the bye week. After the bye week? On the road to Durham. Should be a cracker. 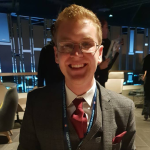