It can be said that 2017 was an insane year for politics. The political scale has shifted from crumbling to despair to absolutely bonkers. From North Korea, Trump, Brexit and everything in between, the political landscape has changed drastically. Here at Brig Politics, we bring you our political predictions for 2018.

Keep in mind that none of us have a special telescope into the future or a window that lets us see. Politics is fragile and always has been. By the time this article is up, things can change significantly. This is what we feel will happen over the next year, based on 2017 and its predecessors.

1. Rise of populism and Euroscepticism in Europe

With the Italian election around the corner, right wing populism has seen a massive rise within Europe the past year. From the AfD winning a significant proportion of voters in Germany, to the rise of the National Front in France, we can see the effect populism is having. Across the Atlantic, Charlottesville showed that politics is repeating history and this is frightening to see. Euroscepticism is a rising phenomenon in Europe, with Brexit, and the European parliament becoming more fractured than ever. Will other nations join the exit of Europe with Britain? Will right populists rise in Italy and across the rest of Europe?

2. Theresa May and Crown Prince of Saudi Arabia could be found “in bed together” following the Prince’s visit to the UK in 2018

Just like she was found cosying up to Trump and the DUP, a similar image will be released as May looks at the Prince, Mohammad bin Salman, in awe. There is a clear relationship between UK and Saudi after London signed off on more than £3.3 billion worth of arms sales to Riyadh, since 2015. The Prince continues his attempt to reform Saudi Arabia – he is trying to grab full power with both hands, something May can only dream of. Could they be discussing a new deal, something to protect the UK during a Brexit future?

Tensions have been rising as North Korea threatens with nuclear weapon tests. Donald Trump and Kim Jong-un have been bickering since Trump came into power and the most recent sanctions act forced by the UN on North Korea has put a further strain on relationships. Could Kim Jong-un throw his toys out the pram and play with his missiles as a reaction to the sanctions? It is a worrying time and 2018 could be the year all the talks come to a head. 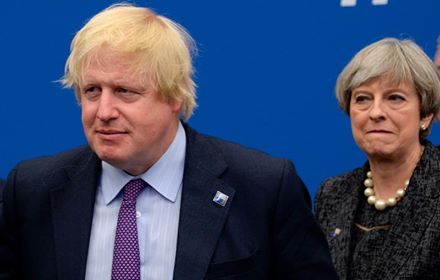 Theresa ‘may’ resign, leaving the gap for Boris to fill?   Credit: Politico

4. Theresa May resigns as Prime Minister

Taking over from David Cameron to lead the country through Brexit was never going to be an easy ride, and I think it’s fair to say it has not been an easy ride for Theresa May.

She has faced rather public backlash from some of her own backbenchers and has struggled on despite it. With the loss of Damien Green from  the cabinet, May is arguably in a vulnerable position, with rumours hinting at a cabinet reshuffle to stabilize the PM’s position.

While Brexit negotiations have finally moved on to the next stage, the outcome will likely be weaker than initially expected and this ultimately could ruin May as leader as her hard-Brexit backbenchers increase pressure.

With the damage surely already done, it is only a matter of time before people such as Boris Johnson step in to replace Theresa May.

Jeremy Corbyn closed the gap between Labour and the Conservatives a little further in the snap general election by attracting the youth vote. He has made no secret that he could see himself as the next PM in the not too distant future.

If my first prediction is correct, it is likely another general election would be called and Theresa May’s successor would fall to Corbyn’s Labour government.

Corbyn himself said he could see himself as the next PM in the next year.

He said “There will probably be another general election in the next 12 months. I think we’d probably win it, with a majority, but we’re working very hard on that.”

The Organisation for Economic Co-operation and Development (OECD) have predicted that the United Kingdom’s economy will slow rapidly in 2018. In light of Brexit, this is not good news. In general, the economy is looking fragile and as of late, Bitcoin has been skyrocketing and also plummeting. Common knowledge tells us that the market is volatile and extremely vulnerable. With the introduction of new currencies such as the “crypto-currency”, 2018 will be a big year for the economy, and global stock markets.  Could Bitcoin’s glory days be over before we know it?

Nearly a year after the resignation of Martin McGuinness and the first collapse of the Stormont power-sharing government in 2017, major parties are still failing to come together and rebuild a working government. The DUP and Sinn Fien are at each others’ throats, and issues of equality and integrity have been the cause of deadlock at “talks” between parties. In order to move on and prevent direct rule, both main parties must come to an agreement.

Equal marriage in Northern Ireland has still not been legalised. Therefore, I believe 2018 will be the year that the DUP no longer use their veto powers this way, and if the nation wants equal marriage, it will happen. Once a working government is up and running, the lobbying will begin and the government will be under a lot of pressure to ensure equality in Northern Ireland.

8. Jerusalem is the catalyst

We have seen the reaction and outrage Trump’s decision has caused. It is not a surprise because US foreign policy sucks. The move made by the US president has caused years of progress to halt and unwind. Any chance of peace talks between Israel, Palestine and the US (always the third wheel?) are gone. Therefore, we can expect more states who sided with the US to move their embassies to Jerusalem and more conflict than ever. Furthermore, the Palestinian Boycott, Divestment and Sanctions (BDS) movement is growing in numbers, reaching a wider audience. What will be the repercussions for all those involved in the Israeli-Palestinian conflict?

9. The SNP to lose its grip on Scotland

While Scottish elections are a while off, each passing year in politics serves to shape the outcome of upcoming elections, and I suspect this one will be no different. The SNP have soared in popularity in the last ten years, especially gaining 56 seats in the UK general election in 2015.

However, it must be argued that their popularity is beginning to dwindle away as they face fierce opposition in the Scottish government. The snap election and the council elections both witnessed SNP loses to Conservatives. The fact is, the general election saw high profile politicians lose their seats such as Alex Salmond and Angus Robertson.

I predict that over the next year the SNP could see their support continue to shrink which could have a detrimental effect on their future in government. In order to fight off Ruth Davidson, do they need to have a stringent look over their policy agendas, including independence?

Leave us a comment on what you think will happen this year in the political landscape.

Election 2020: How Biden’s appointment may impact the US, and UK in wider implications

US election victory: what next for America?

The University of Stirling has welcomed first cohort of students into new Graduate Apprenticeship Programme.…

After their extraordinary exhibition of talent during SUDS on Screen, the Stirling University Drama Society (SUDS)…

Christmas on the Square has all the laughter, loss, and love of previous festive favourites but…

Our exchange in Hong Kong- and why we left early