Sixteen fixtures, one day – keep up to date with all the action as it happens right here on our live blog! Our reporters will be out and about around campus throughout the day, so check back here for all the news on Stirling’s Big Wednesday.

20:58: And that’s a wrap! Thank you for joining us on our coverage of Stirling’s Big Wednesday – we hope you’ve enjoyed it as much as we have, and enjoy the rest of your evening!

20:20: Massive three pointer from Stirling! The deficit is down to 41-34. Momentum with the home team.

20:12: Full house in the Gannochy for the final fixture of the day. Disclaimer: only one bench shown here…

19:52: A reminder that Brig Bleeds Green will be live on the Brig Sport Facebook page after the conclusion of the men’s basketball! Tune in then!

19:43: Half time, and St Andrews hold a narrow lead. It’s 20-17 to the visitors – big second half required from the Stirling boys.

19:37: That leaves men’s basketball as the only game still going on Stirling’s Big Wednesday – they trail 18-16 with two minutes left in the half.

19:26: Fantastic team try from Stirling, and the home side bring up the half century! 52-10 in the closing stages

19:16: More disciplinary trouble for Stirling at the men’s rugby, as a second man is shown a yellow card. There’s now be more cards than tries this half…

19:14: It’s currently 9-6 to the visitors halfway through the first quarter

19:10: Our final fixture of the day has tipped off! Men’s basketball 2s are taking on their counterparts from St Andrews in the Gannochy. 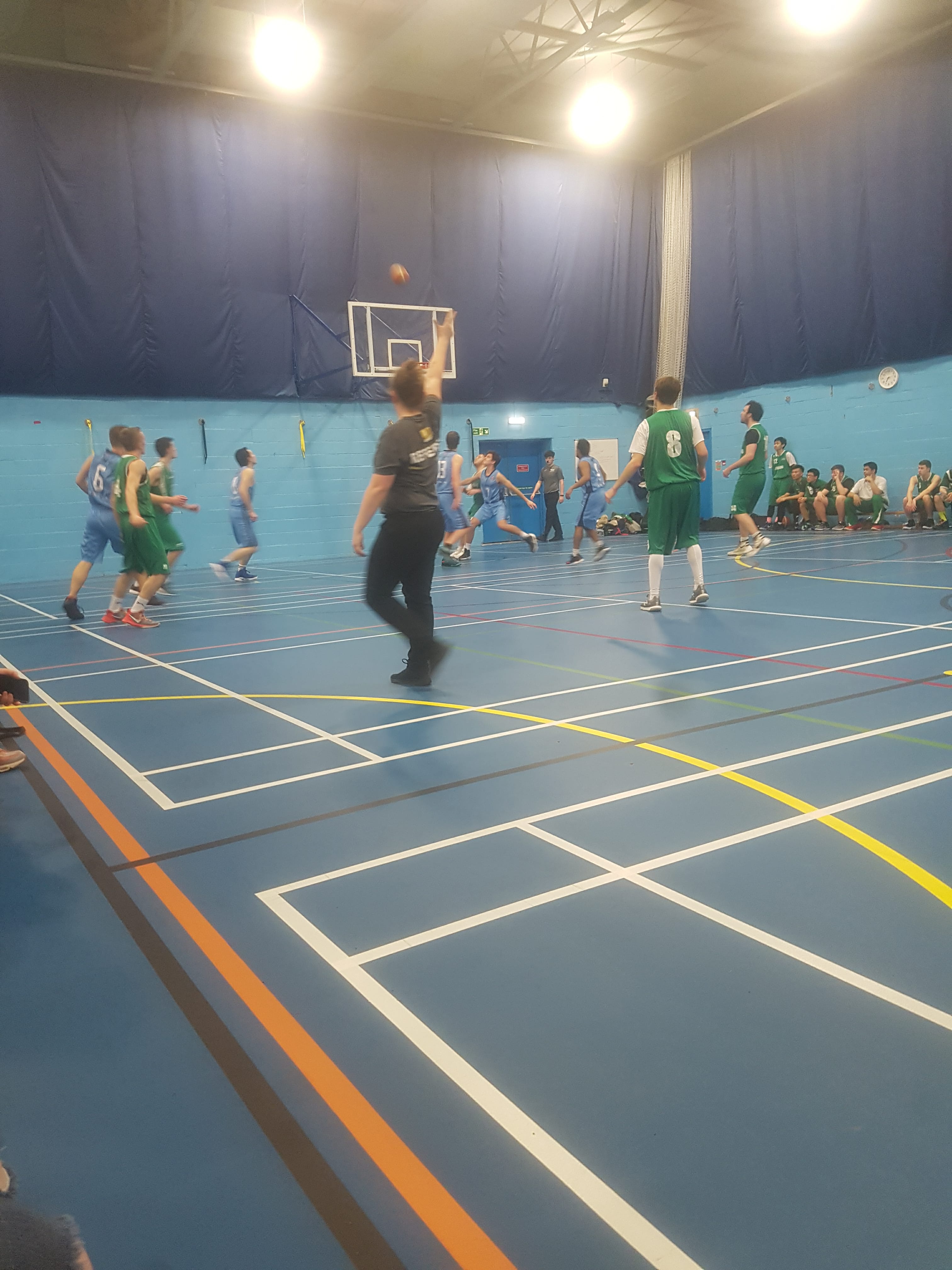 19:07: No score updates to bring you from men’s rugby, but Stirling find themselves down a man after Greg Vears was sent to the sin bin.

18:56: Some news from earlier to bring you as well, as Stirling’s swim team outclassed Edinburgh to win 166-82 at the National Swimming Academy on campus.

18:45: Half time at Stirling County, and Stirling hold a 33-3 lead over Aberdeen 2s. Strong showing so far!

18:36: FULL TIME – Simply outstanding from Stirling in the women’s basketball. They run out 78-31 winners. Truly dominant. 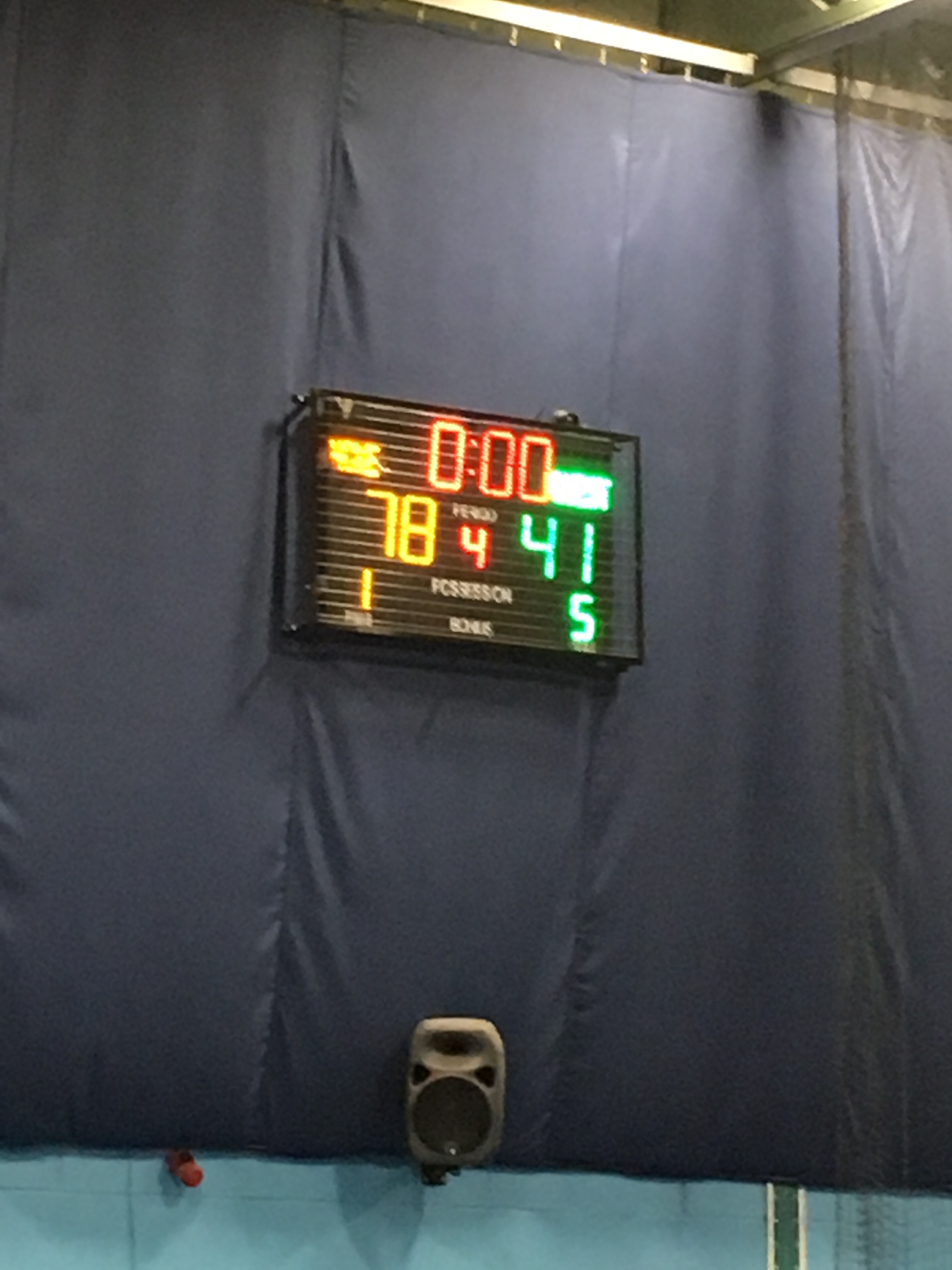 18:31: LENGTH OF THE FIELD! Couper finishes off a flowing move from his own try line, and Stirling are in again. 33-0.

18:29: A small taste of the atmosphere at County… Credit to Jess McGurk.

18:24: Women’s basketball and men’s rugby battling it out to be the most impressive so far. It’s 63-37 to the hosts at the Gannochy, whilst Stirling now lead 24-0 at Stirling County.

18:17: Women’s basketball showing why they’re undefeated this season. They will take a 56-29 lead into the final quarter. Unstoppable so far…

18:08: First try of the evening, and it’s gone Stirling’s way! With the conversion, the home side lead 7-0 after as many minutes.

18:01: We are underway at Stirling County. Can men’s rugby protect their unbeaten run this season?

17:55: Just going to leave this here… Five minutes to go until kick off at Stirling County!

17:40: No let up from the women’s basketball, as Stirling take their lead to 31-15 at the start of the second quarter.

17:36: FULL TIME – Nothing to choose between the men’s hockey sides, as a brilliant save in the dying minutes from Stirling’s goalkeeper makes sure the home side take a 2-2 draw.

17:32: Stirling are dominant in the opening quarter of the women’s basketball. They take a 26-10 lead into the first interval against Heriot-Watt.

17:23: Meanwhile, Stirling’s women’s basketballers are off to a flyer – they lead 11-2 as we approach the end of the first quarter. 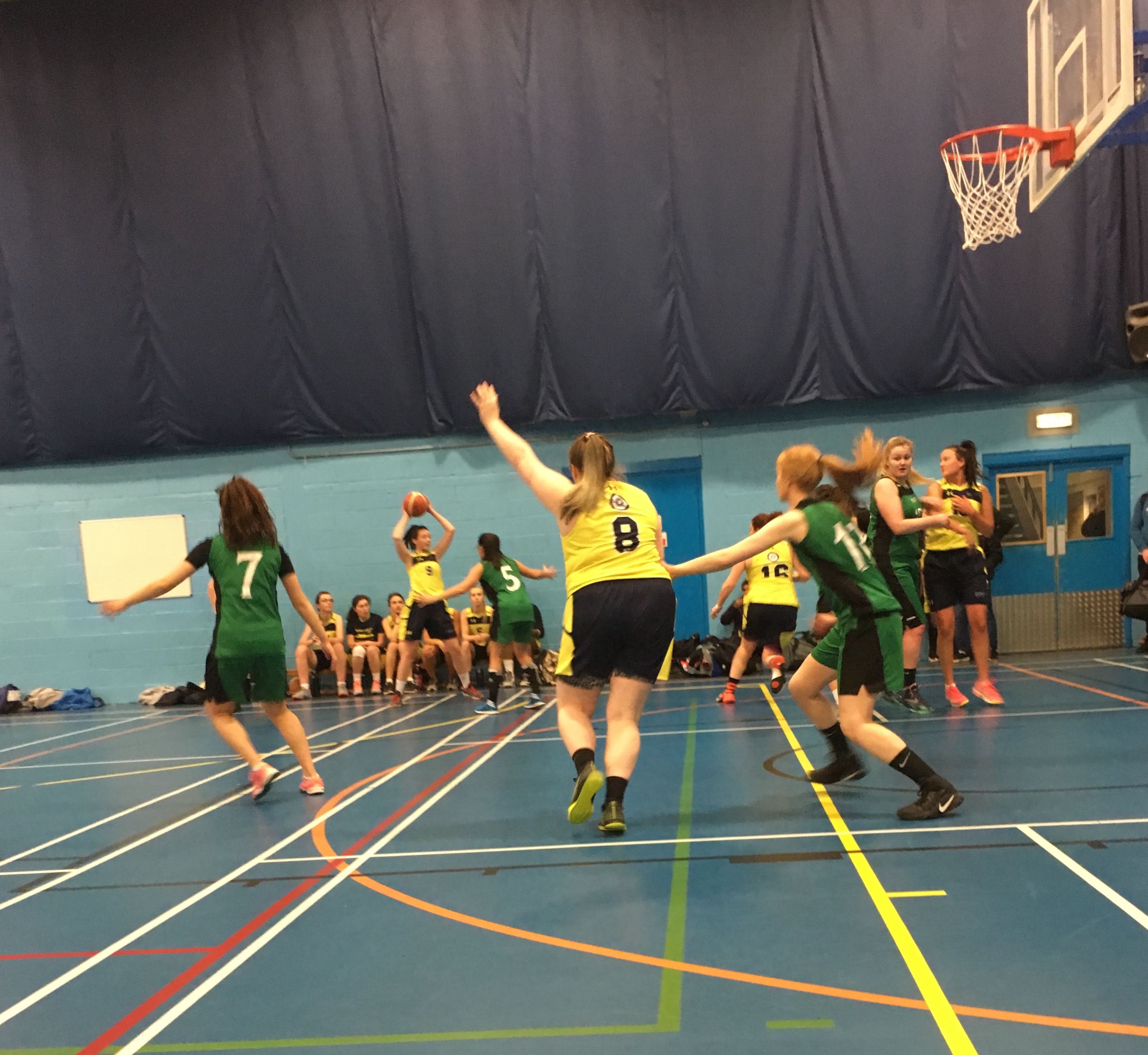 17:15: Stirling continuing to press in the men’s hockey, as they hit the post twice in quick succession. Glasgow’s goalkeeper is having a blinder too, still tied at 1-1.

17:01: Breakthrough! Stirling’s men grab the first goal of the game in the hockey, sending the crowd wild.

17:00: That’s it! Stirling sneak a narrow 2-1 won against Strathclyde, meaning it’s a full house of football wins for Stirling teams on Big Wednesday!

16:54: Half time, and still goalless in the men’s hockey.  Neither Stirling or Glasgow have been able to find a breakthrough thus far.

16:52: WHAT A GOAL! Stirling take the lead against Strathclyde with a wonder goal. 2-1, not long to play.

16:48: Still 1-1 in the women’s football, but Stirling pressing with intent. A shot whistles wide of the post as the clock ticks down…

16:25: Stirling’s men’s tennis 3s have lost to Edinburgh. 10-2 in favour of the capital outfit was how it finished in the tennis centre.

16:21: Early chance for Glasgow, but denied by the Stirling goalkeeper. Great save.

16:17: Our final hockey match of the day is underway! Stirling men’s 1s take on Glasgow 2s under the floodlights.

16:04: Half time – Stirling and Strathclyde’s women’s footballers are unable to be split at the break, the sides level at 1-1.

16:02: All over in the women’s hockey, and it’s a defeat for Stirling 1s. They’re edged out 2-0 by Edinburgh, the visitors proving just too strong on the day.

15.58: A reminder that we still have men’s hockey, basketball and rugby still to come, as well as women’s basketball. Stay tuned!

15:48: Meanwhile, Stirling women’s 2s football are battling it out with Strathclyde on the 3G. Still 1-1 as we approach half-time.

15:42: And it’s a clean sweep of results for the men’s football team, as the 4s complete a dominant display to win 4-1 against Glasgow Caledonian 1s.

15:37: All over for the Stirling men’s football 3s, and they’ve come from behind to take a deserved 3-1 victory!

15:31: Men’s football 4s have grabbed another goal. They now lead 4-0. A dominant display from the home side.

15:20: Second half underway at the womens hockey – big effort required from the girls in green, as they trail Edinburgh 2-0.

15:03: Edinburgh grab a second against Stirling women’s hockey 1s, after a defensive lapse by the home side. Coming up to half time in that one.

15:00: FULL TIME: Stirling hold on for the win against Abertay, with the 3-2 victory securing their place in BUCS Scottish 1A!

14:55: Hamish Campbell has lost his singles match against Edinburgh in the tennis centre. Stirling up against it.

14:53: Drama! Abertay pressing for an equaliser, but Stirling’s goalkeeper produces a spectacular display of bravery to protect the 3-2 lead!

14:51: Back in the tennis centre, Stirling’s Lukas Dahl found himself edged out in his singles match against Edinburgh. Still all to play for in the tie though.

14:47: Abertay pull a couple of goals back in quick succession, and suddenly Stirling men’s 2s find their lead cut to 3-2. Nervy closing stages in store…

14:36: Goals all over the place! Men’s football 2s are in cruise control, scoring their third of the afternoon, whilst men’s 3s have come from behind to lead 2-1 as we approach half-time.

14:28: Better news for Stirling men’s football 4s though, as a goal from Becker doubles their lead!

14:23: Mixed fortunes for our men’s footballers so far. 3s currently find themselves down 1-0, but both 2s and 4s currently lead!

14:06: Dramatic counter attack ends with a Stirling forward wiped out by the keeper, unfortunately no goal was scored from it. Still 2-1 to UWS.

13:59: UWS with a shot that nearly slid past the Stirling keeper but went just wide, rocketing off the post. Game still tied 1-1.

13:44: Durham beat the Stirling pair of Earnshaw and Abbott in a champions tiebreak to take the overall result.

Next on court, its men’s 4s against Edinburgh 3s. Updates as they come in!

13:26 Stirling has tied the game after firing a shot past the UWS goalkeeper. It’s 1-1 with eight minutes to go in the half.

13:08: University of West Scotland (UWS) notches the first goal off a peanlty corner against the the Stirling 3’s despite being short three athletes.

12:55: Stirling women’s hockey 3s are first up on the hockey pitch – they face UWS in just a few minutes!

12:40: Our first outdoors fixture of the day is almost upon us, so our reporters are heading out shortly!

12:19: Our photographers are ready to get out and about though – check them out, modelling the latest in media team fashion!

12:03: Bit of a lull here as players prepare for the next action on court. A reminder, we’ve got hockey for you from 1, and some football for you from 1.15. Stick around!

11:38: Some very excited spectators in attendance too…

11:35: Earnshaw takes the win for Stirling, meaning that Stirling need to win the doubles matches to tie the overall match with Durham.

11:31: Closing stages of the men’s tennis 2s, as Matt Earnshaw looks to wrap up the result…

11:18: Everyone loves a bit of a competition, right? Get involved with the scorecard challenge! All for a good cause, and prizes to be won.

11:04 Can now confirm that women’s rugby have unfortunately been forced to cancel their match this afternoon at Stirling County due to an unplayable pitch.

The men’s team are still scheduled to play Aberdeen at 6pm however, so make sure to get along and support your university!

10:55: Matt Earnshaw is into a third set against Henry Beesley, let’s go Stirling!

10:34: Still waiting on confirmation of various fixtures, but let us know which game you’re looking forward to most! Tweet us @brignewspaper with the hashtag #StirBigWeds

10:09: So just to confirm, both women’s lacrosse and men’s football 5s have fallen foul of the overnight weather. Men’s football 4s will now play at the Gannochy, and we’ll keep you updated as to any further fixture changes as and when we find out.

09:26: We’re off and running today despite the overnight weather, with men’s tennis kicking us off in the Gannochy. More updates to follow!

08:55: It’s set to be a busy day in store, with 16 fixtures set to take place across the University of Stirling campus, as well as Stirling County RFC, throughout the day. For the full list of matches taking place today, click here.