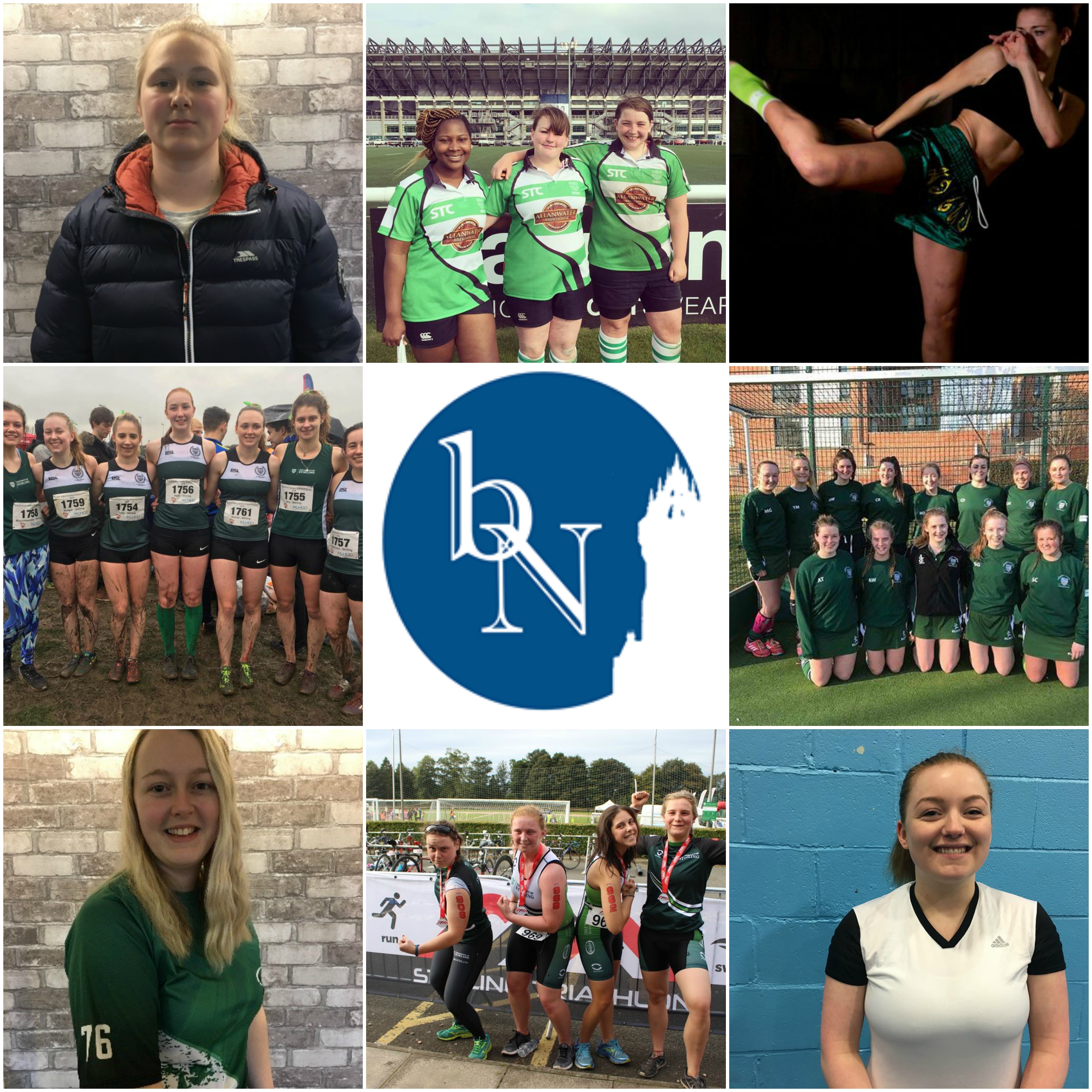 They’re University of Stirling female athletes, and they’re proud to be leaders for equality.

“I feel like a big thing for women is that they’re like ‘oh, it’s not very visible,’” rugby vice-captain India Rome said. “It’s kind of seen as inferior to men’s, but here at Stirling I do feel like we put a lot of effort into helping women’s sport and just as much as they do for any other team. Hopefully this shows [women] not to be afraid and to just go for it, and enjoy themselves.”

Tennis player Marta Krauze agrees, with the pride of representing her university obvious to all that speak to her.

“Once you step out on the court on BUCS Wednesdays, you don’t just represent yourself, you represent the university,” she said

“When you play, it’s not just about yourself, it’s about the team.”

Rome and Krauze aren’t alone in their passion for women’s sports and their desire to see women’s sport grow. Women’s sport matters, and Stirling’s female athletes are showing why it’s important to join the movement, push for equality and be fearless leaders in sport and in life.

Dripping sweat and covered in mud, Rome tramped into the Air3 Radio studio on February 8 with a few of her teammates to talk about women’s rugby on the Sports Flagship show (1:38.42 onwards in the above link), radiating enthusiasm as she described the training, the workouts and the discipline ingrained in the sport of rugby. It’s the physicality of the sport that appeals to her, she said, and she’s not bothered that it’s seen as a men’s game. Nah, that’s half the fun of rugby for Rome.

Growing up, the Scottish native said she never really considered herself an athlete – she hadn’t found a sport that suited her skills and her interests. But university-level rugby offered her something different. She had the chance to learn from national level players, and she had the chance to test herself in a new field, literally and figuratively.

“When I first started I didn’t really have that much of an idea about rugby, but there were a few girls there who knew a lot about it,” Rome said. “So it’s kind of a good experience because you learn from them and they also learn from you because they’re teaching you something that you don’t understand.”

Now, as a fourth-year, Rome is doing the teaching, but the learning hasn’t stopped either. Her teammates serve as some of her strongest female role models in sport and she hopes that the younger athletes can see how she and her teammates have found success through the process of hard work and dedication.

“I feel like I’m somebody that the young girls can look up to and see that I’ve come through the structure and this is where I am,” Rome said. “They can follow that legacy.”

Leaving a legacy of inspiration and independence is a mission that rings true for female athletes and leaders across campus, and Muay Thai athlete Natalia Vorri echoed a similar sentiment when discussing her own experience competing, and excelling, in a sport traditionally populated by men.

Vorri, who started Muay Thai in her second year of university, hopes that her participation shows other women that they are strong, they are talented, and they can train their body to compete at the highest level.

“I do try and recruit women because we need strong women,” she said.

“I always want to encourage the girls to fight. There is lot of girls who come, and they will just do the sparring, they will just do the fitness or to try it out. They are reluctant because they don’t want to get hurt, or they think that they are going to get cut up. It’s so fun if you just go for it. You need to not get scared of getting hit in the face, but it’s not as brutal as people make it out to be.”

Brutality aside, Vorri found that the sport of Muay Thai taught her confidence and body awareness, and she’s grateful for the strength she’s gained through competitions. She hopes to continue to build on her skills and pursue Muay Thai professionally in Thailand, the birth of the sport. Competing in a professional fight remains her goal, and, until that first professional fight, she said she is hesitant to call herself a female athlete.

Iona Hamilton, the captain of the women’s triathlon team, said she too shies away from the female athlete label, instead considering herself a “person who likes to do sport.” She emphasises a well-rounded approach to sport, and she hopes that her balanced lifestyle can set an example for athletes coming through the university triathlon pipeline.

Hamilton’s journey as an athlete began as a child, riding tandem with both her parents, but she has since broken out from that shadow, embraced sport on her own and gained leadership experience along the way. Despite training multiple times a week and putting significant distance in on her bike, however, Hamilton avoids focusing too much on one sport or one goal.

“I want to be in the position where I’ve tried out all the sports I want to try out. I don’t want to be sitting and thinking I want to do something, I want to have done it. You know, I want to climb, I want to walk up more hills, I want to learn how to scramble and use my bike more.”

Hamilton’s biggest piece of advice to fellow triathletes, and fellow females at Stirling, is to take on a similar approach, if that works for them. Seeing sport as something joyful and fun, rather than a stressful, all-encompassing activity has worked for Hamilton, and she wants to show that the most important part of sport about enjoying the process.

But sometimes, even with balance, sport can be much more than just making friends and having a laugh. For ultimate frisbee player Lauren Mitchell, it’s about remember a woman who shaped her life and inspired her to challenge herself every day.

Doing it for Gran

When asked about her female role model, Mitchell’s answer was simple, but the explanation was a little more complex.

“76 is on my jersey, because we got to pick our own numbers, and I picked 76 because that’s the age my Gran passed away at,” Mitchell said.

“If I feel tired, I’m like ‘you know what, my Gran could do so much with her life. She had to raise the children, she went to nursing college, she did all that while raising the children, and I was like ‘this is women is incredible.’ So yeah, 76 and it just follows me everywhere. I see 76, and I’m like ‘that’s for you, Gran.”

It’s this passion and inspiration that drives Mitchell, and she takes great pride in being able to represent her grandmother on the field.

Netball captain Lauren Matthews, like Mitchell, also competes in sport because of the inspiration she draws from a powerful female role model in her life, but in her case, the role model isn’t her grandmother, but rather her mum.

“My mum…was the one that got me into netball,” Matthews said. “She introduced me to the sport and she’s been with me through the whole journey over the past 16 years- taking me to games, taking me to courses, essentially being my taxi driver, but she loves it.”

While Matthew’s mum was able to drive her to games and physically support her netball journey, Mitchell’s role model remains just as critical to her success and drive. The strong women that Mitchell and Matthew look up to have helped shape them into strong female athletes, while also serving as positive role models for other female athletes themselves on campus through their sporting achievements and endeavours.

There is no one definition for what it means to be a female athlete at Stirling, and there is no one experience of competing at the Scottish University for Sporting excellence. For Hamilton, Mitchell, Rome, Vorri and Matthews, the opportunity to be part of a team is a privilege, and with that privilege comes the responsibility of lifting others up and being a supportive role model.

They’re female athletes, and nothing can stop them from being leaders for equality.

Disability - changing the name and the game