The impact of a single word has long been known to start fights and end careers, and yet one of the most demeaning words in the English dictionary is still forcing its way into daily conversation with little thought towards its intended targets.

We pride ourselves on being the most open minded generation and addressing the struggles of the minorities whose voices are often pushed down under the masses. Yet, although women make up more than half the world’s population, we refuse to show the level of respect that any human should be afforded. And yes, this whole article is based around the word slut.

You might be thinking “pedantic feminist spouting anything to further her case,” and I can see why the constant barrage of feminist propaganda can seem excessive to some. And yeah, I’m annoyed with it too… but for an entirely different reason.

Time’s up; the recent Hollywood scandal that saw movie moguls such as the unscrupulous Harvey Weinstein finally be exposed, is just one example of the dangers of slut shaming. Numerous women do not come forward after an attack of sexual violence because they are scared what will be said against them. It is a harsh reality of the world that we live in, that women are often made to feel that the attack that they suffered, happened because of something they did.

Consent is something that, by now, everyone and their pet dog should know about. Countless campaigns have adorned bus shelters, billboards and TV screens in households and campuses alike.

However, there’s still a large proportion of rape victims who won’t come forward because they were drunk or ‘indecently’ dressed when the attack occurred. Who would believe them if they came forward? Clearly it was their fault…

Words like slut reaffirm these horrendous beliefs, when we should instead be promoting the respect of one another.  We need to stop degrading women to the point where they feel they are not entitled to speak out against those who harm them.

Now for those of you thinking, ‘this isn’t only an issue faced by women,’ fair enough. But let me explain why I’m focusing on women in this article.

Sure, I’ve heard slut used against men, but by definition, it’s women who the word targets more often than not. 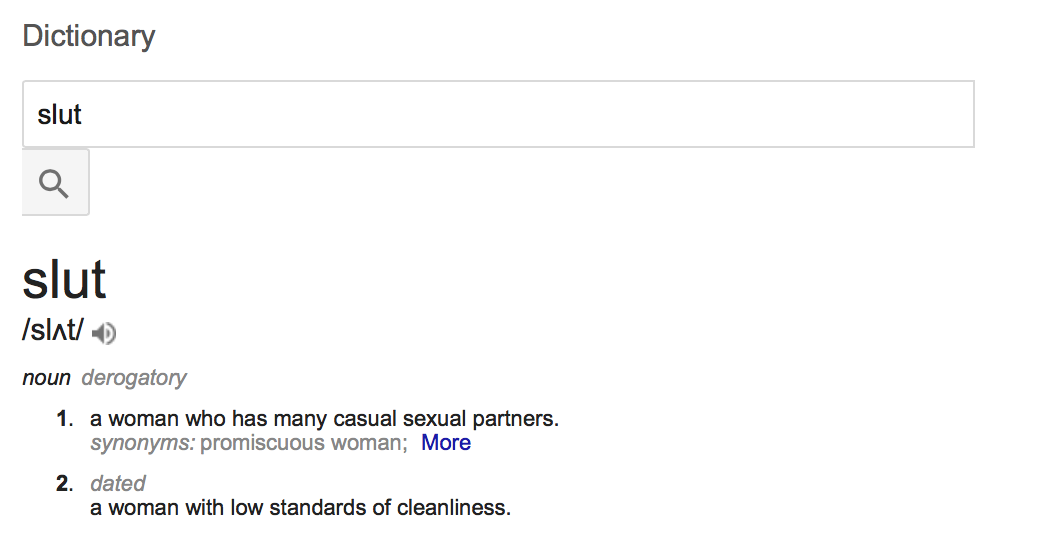 What even constitutes a slut? Where is the line drawn? Who is safe from being branded and for how long?

Women celebrating their sexuality and bodies should be something we celebrate, and yet we reprimand them. In all honesty, sometimes reading headlines becomes synonymous in my head with the continuous diatribe on the ‘shocking’ lack of clothing a celebrity has worn that day. You mean to say there’s a body under there? The eye rolling hysteria made over the female figure just goes to show the systemic sexism that has well and truly infiltrated our everyday life.

Yes, I really do mean everyday life. On behalf on the girls sent home with dress code violations for wearing a top that showed their shoulders, because it was deemed “too distracting for boys,” I’m sorry. I’m sorry that society is punishing you for having shoulders and I’m sorry that they haven’t done enough to teach boys to focus on their work and not your shoulders. It’s absurd!

In the words of Mari Tuffs, a student at Citrus High School inspired by the #IAmMoreThanADistraction, “we are not just our body.”

A graduates goodbye: what you need to know

TikTok’s unrealistic beauty standards and how they damage us

Novak Djokovic: Rule-Breaker or Fighting Hero? – The Power of Framing

UCU to discuss new deal offer made by Universities UK

I have been sober for four months

It's an awful, dirty feeling, having others minimise your traumatic event to something as trivial as…

Supporting small businesses: Pencil Me In