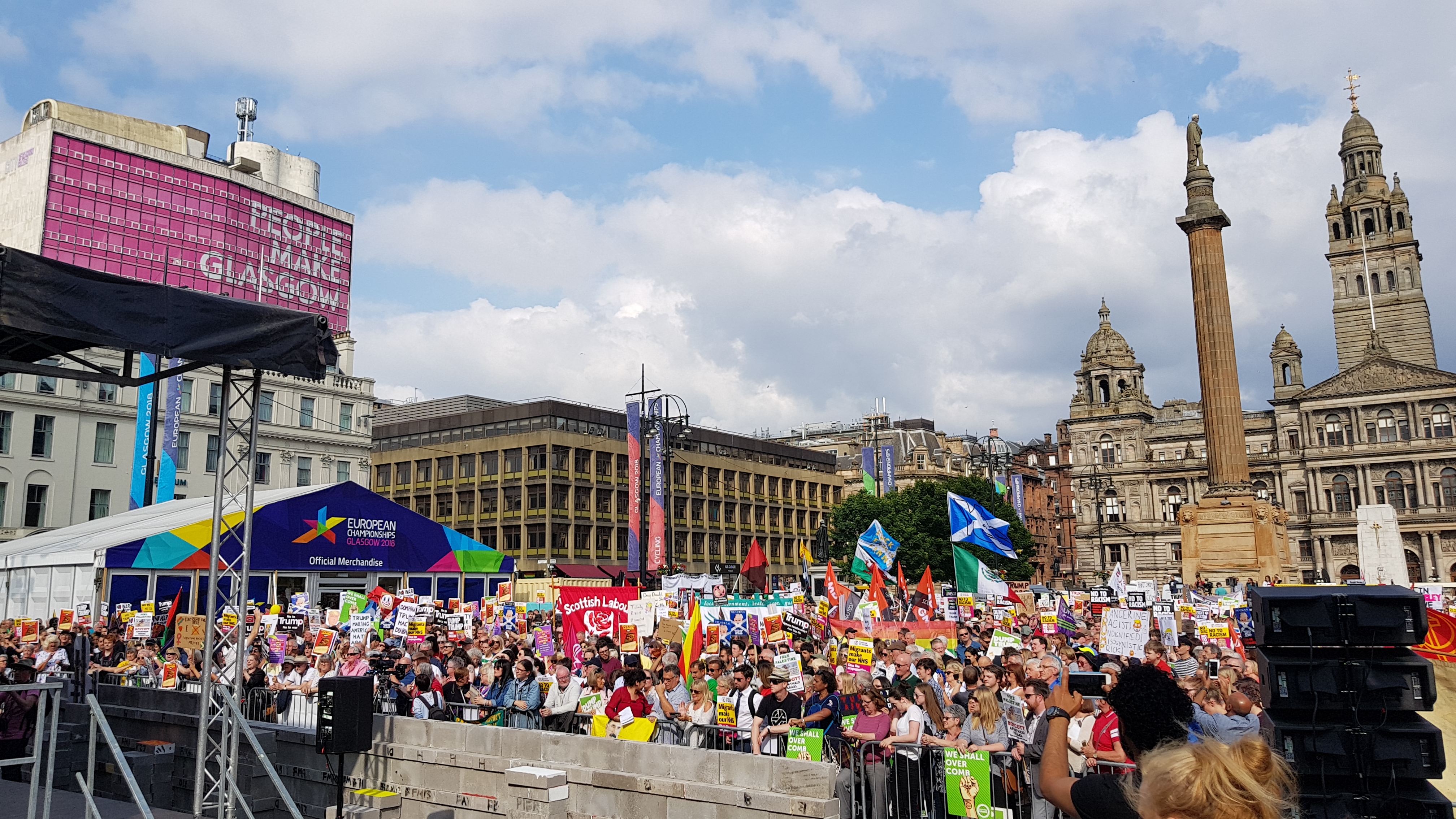 2000 people attended a demonstration in George Square on Friday to protest President Donald Trump’s visit to Scotland.  Demonstrators gathered throughout the square and in front of a large stage where a small wall had been built to “block out Trump,” which was decorated by the demonstrators.

Police Scotland had estimated that around 2000 people attended the demonstration in George Square, which lasted from 5pm to 9pm.  Officers were scattered around the perimeter of George Square and in amongst demonstrators, as well as horses from the mounted unit being brought in.

Statement from Assistant Chief Constable Mark Williams:
"The weekend's planned protests have now concluded.
"Around 2,000 people were in Glasgow and approximately 250 were in Dundee on Friday evening, further 9,000 marched and took part in a rally in Edinburgh
today (1/2)

Demonstrators, both old and young, held placards and signs attacking President Trump and his policies, as well as referencing moments during his campaign and presidency.  Some demonstrators waved Mexican flags and wore ponchos and sombreros to attack Trump’s attitudes towards Mexico, and his rhetoric towards Mexican immigrants.

Many of the signs had their own Glasgow twist, using some classic Glaswegian phrases to describe the US President.  One sign was a saltire with orange writing reading; “Bolt ya nugget.”

There were a number of guest speakers at the event, including activists and faith leaders.  Prominent Scottish politicians also spoke at the event, with the Deputy Leader of the SNP Keith Brown, Scottish Labour Leader Richard Leonard, and Scottish Greens Co-Convener Patrick Harvie all making speeches.

Scottish Labour Leader Richard Leonard spoke to Brig and said; “This is a real show of strength from political parties in Scotland, as well as faith groups and non-faith groups.

Heather McVey, a Labour councillor with North Lanarkshire Council said; “He is far from our vision and values, and we are here as a show of solidarity.”

Patrick Harvie described Trump as ‘a vile bully’ and said that the special relationship was with people in America, not the White House.  He also spoke about standing in solidarity with people in the US who’s “lives are put at risk” by his policies.

Ross Greer, the Green MSP for West Scotland, also commented on the protests and President Trump’s visit; “The Greens thought that this was so important that we were a main organiser.  We stand with those who are impacted by Trump’s policies.

“We know that he cares about this sort of thing and that it bothers him, we know he’ll see this on the news tonight and it will bother him.

“We oppose him, he is not welcome, he is our enemy and we will win.”

One member of the Scottish Green Party described the protest as “really good” and praised the “great turnout,” she also added; “Trump is not welcome here, Glasgow is committed to equality, human rights, peace, combating climate change, support for migrants and refugees, support for Palestine, and solidarity with protests in the United States.  We have met Americans who were really appreciative of Glasgow today, and we do not want Trump here.”

Keith Brown MSP boasted Scotland’s “extremely proud” record of welcoming immigrants and refugees in his speech, and spoke about how this was a difference between Scotland and Trump.  He spoke about what this tells the world about Scotland’s opinion of Trump, and finished by asking; “Does Scotland love Trump?” and the crowd responded with nos and boos.

One man who was waving an SNP flag who said he was a “long time” member of the party said; “This is great, every party and fair-minded person is here today, it just shows that although we [Scotland] may be divided over independence, we stand in unity when it comes to lunatics from across the water.”

A number of organisations also made an official appearance at the protest.  The chair of Scottish CND, Arthur West commented; “We are pleased to be here at this anti-Trump rally.  Sadly we think Donald Trump is a threat to world peace.  We are disgusted by the language he uses when describing women and immigrants, which seem to be aimed at stirring up hatred and resentment in our communities.”

The Socialist Workers Party had a stand at the protest, one member said; “We are seeing thousands of people coming out to protest a misogynistic, racist bigot who emboldens the far-right around the world and the UK.  What we are seeing today is people saying enough is enough, that we don’t want the world’s number one racist here.

“He will be met with resistance, just like there is resistance in the US.

“We stand in solidarity with everyone impacted by Trump.”

The Scottish Secular Society said; “Trump stands for the politics of division, separating those who aren’t white Christian.  We promote tolerance, and we stand for British values and European values.”

The national branch of the University and College Union (UCU Scotland) said; “It is important that we are here as an education union.  Trump likes to trash experts and he stands for the complete opposite of our values.  Many of our members support us being here because what he’s doing is unacceptable, it’s also great to see the kids here protesting against Trump.”

A representative from UCU Strathclyde added; “Donald Trump represents everything that is wrong with the neoliberal society that our students and staff have to live in.  Standing here for a few hours to show solidarity with the people in the US is the least we can do.

Strathclyde University’s Student’s Union were also in attendance, and the Strathclyde Union President, Matt Crilly, spoke with Brig; “Donald Trump represents a dangerous emergence of fascism with his scapegoating of immigrants, women, refugees and any minority group he decides to come after on any given week.  Student unions have a proud history of standing up to bigotry, and that’s why we are here today.”

The President of NUS Scotland (National Union of Students) Liam McCabe also attended the protest alongside the Deputy President of NUS Scotland and other members.  He spoke with Brig saying; “Donald Trump stands for everything our organisation is against, we stand against all of the poisonous trends that he is encouraging, we oppose his racism, sexism, misogyny, homophobia, and bigotry.

“We want honesty and respect in politics and we are glad to stand in solidarity with progressives across Scotland.”

Representatives from Amnesty International said that they were there to combat Trump’s “erosion of human rights.”  They stated their opposition to the United States pulling out of the United Nations Human Rights Council, his acts of separating children from their families and imprisoning them, and taking away women’s right to an abortion.

“We are here to add our voice to Scotland’s protest against Trump,” they concluded.

Kelly criticised the £5 million cost to host Trump and all police days off being cancelled.  He said that he felt Trump being allowed to visit was refusing democracy due to the petition to refuse Trump a visit to the UK.

Many demonstrators voiced their opinions about President Trump, many spoke to Brig about their views on the President’s visit.

“I think he’s [Trump] is a pretty nasty piece of work, he’s against everything I stand for, he shouldn’t be in power, he’s an idiot.”  one said.

One woman who said she hadn’t been to a demo since protesting the invasion of Iraq in 2003 said; “We’re here to protest this uninvited ‘person,’ who invited him anyway?”

“I don’t like him,” she continued, “he’s a racist, sexist, xenophobic, and a homophobe, and that’s me being polite.

“I’m here to show solidarity with all those injured by Trump.”

“I’m living here [Scotland] now and he is trying to bring his fascism here, and I don’t want him to bring that here.

“I’m really impressed with the turnout here in Glasgow and in London, we’ve had some great speakers here today.  I came with a contingent of academics and we hope to show the broad spectrum of opposition to his w*nkery.”

Another demonstrator who came dressed as the Loch Ness monster said; “Scotland has its own monster, and we can spot a monster a mile away.  We stand in solidarity with protesters in the US and everyone impacted by Trump.  We were thanked by an American today, and that made today totally worth it.”

Demonstrators were pleased with the number of people who had turned out to protest; “I’m really impressed with the turnout, it’s great to see how many people see how dodgy Trump’s visit is,” one demonstrator said.

“It is so obvious how much of an anti-Trump feeling there is in the UK, someone in the Government needs to take notice.”

Some demonstrators also brought their dogs along to the protest, wearing their own signs against the US President.

There was a counter-protest in the far corner of George Square, where a small group of four people with a banner that read “Scots for Trump” rallied.  They were surrounded by police officers and police horses.  One member of the public who was wrapped in an American flag agreed to comment.  He described the slogan Dump Trump as “childish” claimed that there were “a lot of uneducated people” attending the anti-Trump rally.

When the counter-protesters were called “Nazi scum” and “racists”, the man in the American flag claimed that anti-Trump protesters were only using the word Nazi to gain the moral high ground, and that he didn’t think that the counter-protesters were racists or Nazis, and said that being pro-Trump or pro-USA doesn’t make you a racist.  He added that he would have voted Trump in spite of Hillary Clinton, and that if someone were to see his US flag then it would be the “best sight they’ll see tonight.”

Police escorted the counter-protesters away from George Square soon after.

The mood of the crowd at the rally was clear that they were not welcoming the US President, with the crowd chanting “Trump you’re not welcome here!” and guest speakers describing him as the “world’s no. 1 racist” and linking his rhetoric to 1930’s fascism, and leading further chants of “jail Trump not children” and “make racists and fascists afraid again.”

Whilst all this was going on Donald Trump met with the Queen, and then made his way to Trump Turnberry, where more demonstrations took place the following day.

President Trump left the UK on Monday and is due to meet Russian President Vladimir Putin.

Here are some photos Brig captured at the event.

Political figures and the image they craft through their fashion