If you’ve had your ears on the Scottish indie music scene lately, you’ve undoubtedly heard of Luna The Professor – currently set to be supporting big name acts like The LaFontaines and King No-One. Hailing from Wishaw, just outside Glasgow, the four lads have been headlining and supporting gigs around Britain for the past three years and are now just about ready to release some music. Brig sat down with them in-studio between rehearsals to hear what they were all about.

Where does the name ‘Luna The Professor’ come from?

Ross: Aw mate that’s too funny, my cat’s called Luna and my maw: works wae blood, she’s a biomedical scientist or some shit like that so we got professor from my maw, it was just like putting two words together-

Johnny: Aye we called it that because of his cat and his maw mate, Roddy’s [Ross’] talking shite now.

How long have you all been together now?

Dave: As a band? I’d say about four years.

Johnny: Not as long as that mate, I’d say three.

Johnny: Two and a half, three years mate.

What are your biggest influences when it comes to music?

Dave: People are going to hate us, but I’d say sometimes we get inspo from Coldplay and that.

Johnny: When the band comes together and we’re all playing, I’d certainly say you’d get The Strokes, The Killers, bands like that, tracks like ‘Divide’ that we’ve got on Facebook are quite heavily Oasis inspired. We vary in our stuff quite a lot. You can’t put it to one thing I’d say, although it does sound like everything else, it’s still got its own wee place somewhere, that’s what I think.

Dave: I think when you listen to the tunes as well, it’s hard to compare to another band.

Johnny: I wouldn’t say that man, I could compare us to hundreds of bands but I just think there’s just something that’s different. I’m not saying that to be cocky I just think that’s how it is, it’s probably just that we’re not as good.

Why start a band?

Johnny: People were trying to find reasons to get on it and it came to the point where we were just like, why don’t we play gigs? Our first gig was at a community centre with about 200 drunk under-agers, polis ended up coming, it was mayhem but it was so class.

Ross: It was brilliant man.

Johnny: Me and him [Ross] have known each other since primary school, he used to hate me, I used to hate him, it was like a rivalry because in primary school the only two people that played instruments was me and you [Ross], at the talent shows and that before Easter, in fact one time, naw I’m not going to say, should I?

Johnny: Right one time, I de-tuned his guitar on the fly without him knowing before he went on stage, and I won it man, I was the champ … I know Eamonn because we used to be in a band together ages ago.

Eamonn: And then we fell out, so you hated Ross and you hated me.

Johnny: It was mutual they all hated me too, Dave hated me and I hated him because he used to be in a band that was against me, it was a rivalry between The Costones and Stuck in a Schlong [Stuck in a Sling].

Dave: And the friendships grown from there.

Eamonn: Yeah, we no longer hate each other.

Johnny: Aye we can tolerate each other and then kid on we like each other so it’s alright.

How important is the band to you?

Johnny: The band’s everything mate, at the start it was like a joke almost, but over time you just get a love for it. Playing together with your pals in a band and going places, I’d rather be playing gigs and going to different places at the weekend, rather than sitting down your local then going to a nightclub. Why would you want to do that when you can go to a nightclub in Liverpool and then go do a gig the next day? It’s like having a roll and sausage with no tomato sauce and then one with tomato sauce, just banging.

Johnny: First audio sell-out headline, the first time we sold out, the feeling of selling out a gig was amazing.

Eamonn: That was our first headline.

Johnny: That was the first time we properly heard people in the crowd screaming back a song.

Dave: It was the first time we cuddled each other after a gig.

Johnny: Don’t put that in it.

What are your plans for the band going forward?

Eamonn: Gig like fuck and get some music out.

Dave: We’ve been writing a lot of tunes for the past year and a half I’d say, we’re just waiting for the right time, we’ve wiped the old material and just wrote brand new material.

Johnny: We want people wanting more, it’s an achievement for us to have sold out 4 shows without any music released.

So what are you writing right now?

Johnny: We’ve got a single coming out soon called ‘Hometown’, and if you want to find out what the rest are called you’ll have to come to the gigs and find out.

Do you have anything you would like to say to any potential new fans?

Johnny: Don’t listen to it, just come and hear it.

Eamonn: You’re guaranteed a class time, come to a gig and-

Johnny: Then you’ll understand why we’re doing it.

And where can people find you? 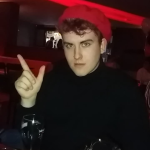