To say that Ariana Grande has had a turbulent couple of years would probably go down as one of the biggest understatements of the decade.

While Sweetener (released just six months ago) was the album born out of trauma after the terror attack at her concert in Manchester in May 2017 and finding new love with Pete Davidson, thank u, next sees her dealing with the end of her short-lived engagement and the grief after the death of her ex Mac Miller.

Produced in just two weeks, something that is practically unheard of when it comes to pop albums, it is a showcase of the raw emotions she was going through at the end of last year. Written alongside close friends that she has worked with on earlier material and produced by the likes of Max Martin (who has made hits for the likes of Britney Spears, Taylor Swift and The Backstreet Boys), thank u, next is a revelation of an album that could showcase a new way to make pop music.

Rather than spending years tweaking, re-writing and over-producing, Ariana has made music at a time when the inspiration was flooding out of her and worked with a team that she knows and trusts. The immediacy of its release is also practically unheard of in pop music. While hip-hop artists can churn out music throughout the year without anyone batting an eyelid, it’s rare for a major pop star to release two full length studio albums within such a short window of time.

While Sweetener tackled issues like her anxiety on ‘breathin’, she’s even more open on this album. One of the highlights is ‘ghostin’, a heart-breaking track with lyrics like:

“Though I wish he were here instead

Don’t want that living in your head

He comes to visit me

When I’m dreaming every now and then”

Given the circumstances around which this album was made, it is fair to say it almost plays out like a journal throughout and you can kind of assume who those lyrics are referring to. 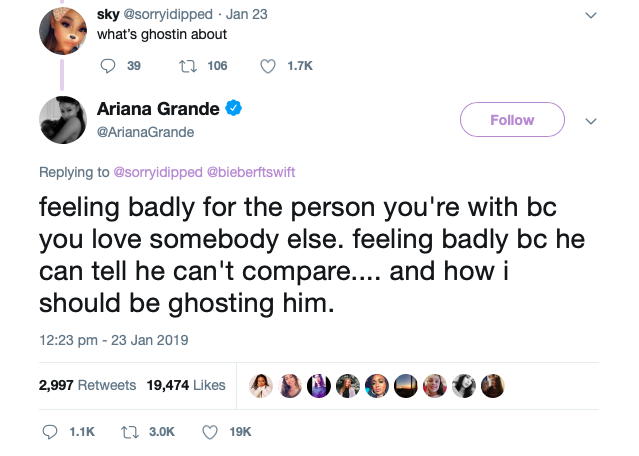 However, it’s not all doom and gloom. There’s a lot of fun, experimental pop throughout the twelve tracks on here. For example, there’s the Sound of Music sampling, trap-influenced ‘7 rings’, which even sees her rap a verse. While you’d think that a track about buying nice things with the millions she has in the bank account would sound smug, it’s instead an empowering song about how important her friends are to her and that she doesn’t need a man when she’s got them.

It’s safe to say that by releasing that track, Ariana Grande has already become a better rapper than Iggy Azalea… not that that’s a difficult achievement!

Another personal highlight of the album is ‘in my head’, a track about falling in love with a version of a person you’ve created in your head. It has a really catchy hook and has some really inventive lyrics, such as:

“Yeah, look at you, boy, I invented you
Your Gucci tennis shoes runnin’ from your issues
Gotta hook-up from the high
I figure we can work it out”

I think tracks like this really highlight her growth as an artist, having moved away from the cheesy pop of her earlier material like ‘Popular Song’ from her debut album. Not only has she found her voice in a time of inner turmoil, but she’s also found her sound with all twelve tracks having some sorts of R&B and hip-hop influences that she had started to experiment with on her previous album.

Ariana Grande has managed to release the first “event album” of the year and it definitely lives up to the hype. Managing to create fun, catchy pop songs out of topics like needing a bit of space in a relationship, moving on from old loves and heartbreak is difficult but she’s achieved it.

From Brig with love: your worst dates.

February 14 and its unsung significance